Cenote at Bolonchen, Mexico, used as source of water, 1842.

A cenote (English: /sɨˈnoʊtiː/ or /sɛˈnoʊteɪ/; Spanish: [seˈnote] or [θeˈnote]; plural: cenotes; from Yucatec Maya dzonot or ts'onot,[1] "well"[2]) is a deep natural pit, or sinkhole, characteristic of Mexico and Central America, resulting from the collapse of limestone bedrock that exposes groundwater underneath. Especially associated with the Yucatán Peninsula, and some nearby Caribbean islands, cenotes were sometimes used by the ancient Mayans for sacrificial offerings. The term derives from a word used by the low-land Yucatec Maya, to mean any location with accessible groundwater.

Cenotes are surface connections to subterranean water bodies.[3] While the best-known cenotes are large open water pools measuring tens of meters in diameter, such as those at Chichén Itzá, the greatest number of cenotes are smaller sheltered sites and do not necessarily have any surface exposed water. The term cenote has also been used to describe similar karst features in other countries such as Cuba and Australia, in addition to the more generic term of sinkholes.

Cenote water is often very clear, as the water comes from rain water infiltrating slowly through the ground, and therefore contains very little suspended particulate matter. The groundwater flow rate within a cenote may be very slow at velocities ranging from 1 to 1,000 meters (3 to 3,000 ft) per year.[citation needed] In many cases, cenotes are areas where sections of cave roof have collapsed revealing an underlying cave system, and the water flow rates here may be much faster: up to 10 kilometers (6 mi) per day.[4] Cenotes around the world attract cave divers who have documented extensive flooded cave systems through them, some of which have been explored for lengths of 100 km (62 mi) or more. 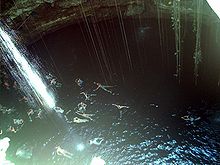 Cenotes are formed by dissolution of rock and the resulting subsurface void, which may or may not be linked to an active cave system, and the subsequent structural collapse of the rock ceiling above the void. Rock that falls into the water below is slowly removed by further dissolution, creating space for more collapse blocks. The rate of collapse increases during periods when the water table is below the ceiling of the void, since the rock ceiling is no longer buoyantly supported by the water in the void. Cenotes may be fully collapsed creating an open water pool, or partially collapsed with some portion of a rock overhang above the water. The stereotypical cenotes often resemble small circular ponds, measuring some tens of meters in diameter with sheer drops at the edges. Most cenotes, however, require some degree of stooping if not crawling to access the water.

In the north and north-west of the Yucatan Peninsula, the cenotes generally overlie vertically extensive voids penetrating 50 to 100 m (160 to 330 ft) below the modern water table. However, very few of these cenotes appear to be connected with horizontally extensive underground river systems, with water flow through them being more likely dominated by aquifer matrix and fracture flows.[4] In contrast, the cenotes along the Caribbean coast of the Yucatán Peninsula (within the state of Quintana Roo) often provide access to extensive underwater cave systems, such as Sistema Ox Bel Ha, Sistema Sac Actun/Sistema Nohoch Nah Chich and Sistema Dos Ojos.

The Yucatán Peninsula contains a vast coastal aquifer system, which is typically density-stratified.[4] The infiltrating meteoric water (i.e., rainwater) floats on top of higher density saline water intruding from the coastal margins. The whole aquifer is therefore an anchialine system (i.e., one that is land-locked, but connected to an ocean). Where a cenote, or the flooded cave to which it is an opening, provides deep enough access into the aquifer, then the interface between the fresh and saline water may be reached. The density interface between the fresh and saline waters is a halocline, which means a sharp change in salt concentration over a small change in depth. Mixing of the fresh and saline water results in a blurry swirling effect due to refraction between the different densities of fresh and saline waters. The depth of the halocline is a function of several factors: climate and specifically how much meteoric water recharges the aquifer, hydraulic conductivity of the host rock, distribution and connectivity of existing cave systems and how effective these are at draining water to the coast, and the distance from the coast. In general, the halocline is deeper further from the coast, and in the Yucatán Peninsula this depth is 10 to 20 m (33 to 66 ft) below the water table at the coast, and 50 to 100 m (160 to 330 ft) below the water table in the middle of the peninsula, with saline water underlying the whole of the peninsula.[4] 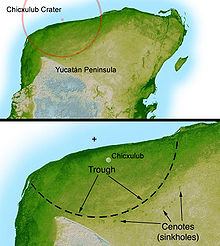 Radar topography reveals the 180 km (110 mi) ring of the crater; clustered around the crater's trough are numerous sinkholes, suggesting a prehistoric oceanic basin in the depression left by the impact (Image courtesy NASA/JPL-Caltech).

Although cenotes are found widely throughout much of the Yucatán Peninsula, a higher density circular alignment of cenotes overlies the measured rim of the Chicxulub Crater. This crater structure, identified from the alignment of cenotes,[6] but also subsequently mapped using geophysical methods (including gravity mapping) and also drilled into with core recovery, has been dated to the boundary between the Cretaceous (K) and Tertiary (T) periods, 65 million years ago. This meteorite impact at the K–T boundary is therefore associated with the mass extinction of the dinosaurs, and is also known as the Cretaceous–Tertiary extinction event.[7]

In 2001–2002 expeditions lead by Arturo H. González and Carmen Rojas Sandoval discovered three human skeletons; one of the them, Eve of Naharon, was carbon dated to be 13,600 years old.[8][9][10] In March 2008, three members of the Proyecto Espeleológico de Tulum and Global Underwater Explorers dive team, Alex Alvarez, Franco Attolini, and Alberto Nava, explored a section of Sistema Aktun Hu (part of Sistema Sac Actun) known as the pit Hoyo Negro.[9][11] At a depth of 57 meters (187 ft) the divers located the remains of a mastodon as well as at 43 meters (141 ft) a human skull that might be the oldest evidence of early man in this area to date.[9]

The Yucatán Peninsula has almost no rivers and only a few lakes, and those are often marshy.[12] The widely distributed cenotes are the only perennial source of potable quality water and have long been the principal sources of water in much of the Yucatán Peninsula. Major Maya settlements required access to adequate water supplies, and therefore cities, including the famous Chichén Itzá, were built around these natural wells. Some cenotes like the Cenote of Sacrifice in Chichén Itzá played an important role in Maya rites. Believing that these pools were gateways to the afterlife, the Maya sometimes threw valuable items into them. The discovery of golden sacrificial artifacts in some cenotes led to the archaeological exploration of most cenotes in the first part of the 20th century. Edward Herbert Thompson, an American diplomat who had bought the Chichén Itzá site, began dredging the Sacred Cenote there in 1904. He discovered human skeletons and sacrificial objects confirming a local legend, the Cult of the Cenote, involving human sacrifice to the rain gods (Chaacs) by ritual casting of victims and objects into the cenote.

Cenotes have attracted cave divers and there are organised efforts to explore and map these underwater systems. The Quintana Roo Speleological Survey maintains a list of the longest and deepest water filled and dry caves within the state boundaries.