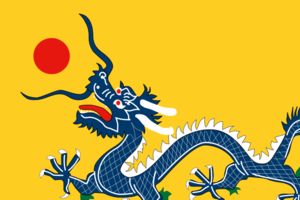 Qing Emperor annexed Taiwan because he wanted to remove the remaining resistance forces against the Qing Dynasty. However, Qing did not want to develop Taiwan over aggressively as this may encourage any potential resistance force to build a base in Taiwan. Accordingly, the early Qing Dynasty ruled Taiwan passively. Taiwan was governed as part of at the time, only becoming a separate province later.

There were more than a hundred rebellions during the early Qing Dynasty reign. The frequency of rebellions, riots, and civil strife in Qing Dynasty Taiwan is evoked by the common saying "every three years an uprising; every five years a rebellion" (三年一反、五年一亂).

The restrictions on mainland Chinese residents migrating to Taiwan stipulated that no family members could accompany the migrant. Therefore, most migrants were mostly single men or married men with wives remaining on mainland China. Most early male migrants to Taiwan would choose to marry the indigenous women. Accordingly, there was a saying which stated that "there were Chinese men, but no Chinese women" (有唐山公無唐山媽).

The Han people frequently occupied the indigenous land or conducted illegal business with the indigenous peoples, so conflicts often happened. During that time, the Qing government was not interested in managing this matter. It simply drew the borders and closed up the mountain area so they could segregate the two groups. It also implemented a policy which assumed that the indigenous peoples would understand the law as much as the Han Chinese, so when conflicts arose the indigenous peoples tended to be judged unfairly. Accordingly, indigenous land were often taken through both legal and illegal methods, sometimes the Han Chinese even used inter-marriage as an excuse to occupy land. Many people crossed the maintain borders to farm and to conduct business, and conflicts frequently arose.

The Han people occupied most of the plains and developed good agricultural systems and prosperous commence, and consequently transformed Taiwan into a Han society.

Taiwan had a strong agricultural sector in the economy, while the coastal provinces of had a strong handcrafting sector, the trade between the two regions prospered and many cities in Taiwan such as Tainan, and became important trading ports.

During 1884-1885, the affected Taiwan. Qing then realised the strategic importance of Taiwan in relation to trade and geographical location and decided rapidly developed Taiwan. In 1885, Taiwan became , and was appointed as the governorFact|date=August 2008. He increased the administrative regions in Taiwan to tighten control and to reduce crime. He implemented land reform and simplified land management. As a result of the land reform, the taxation received by the government increased by more than threefold. He also developed the mountain area to promote harmony between the Han Chinese and the Indigenous Taiwanese peoples.

However, modernisation of Taiwan was his main achievement. He encouraged the use of machineries and built military defence infrastructure. He also improved the road and rail systems. In 1887, he started building the first Chinese-built railway (completed in 1893). In 1888, he opened the first post office in Taiwan (see ), which was also the first in China. Taiwan was then considered the most developed province in China.

However, soon after his reforms Taiwan was ceded to Japan by the in 1895.