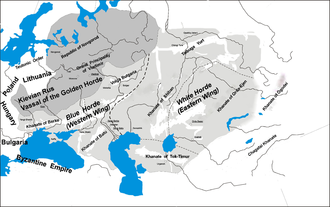 Two Sarai cities are shown above the Caspian Sea in the map.

Sarai ( also transcribed as Saraj or Saray) was the name of two cities, which were successively capital cities of the Golden Horde, the Mongol kingdom which ruled Russia and much of central Asia in the 13th and 14th centuries. They were among the largest cities of the medieval world, with a population estimated by the 2005 Britannica at 600,000.

Sarai is Persian[1] for "palace". There is also a variation meaning home (Saraa), similar to Sarajevo in the Balkan peninsula.

"Old Sarai", or "Sarai Batu", "Sarai Berke" or "Sarai-al-Maqrus"[2] (al-Maqrus is Arabic for "the blessed") was established by Mongol ruler Batu Khan in the mid-1240s, on a site east of the Akhtuba river, near to the modern village of Selitrennoye[3].

This site was most probably located on the Akhtuba River, a channel of the lower Volga River, near the contemporary village of Selitrennoye in Kharabali District, Astrakhan Oblast, Russia, about 120 km north from Astrakhan.

Sarai was the seat of Batu and his successor Berke. Under them Sarai was the capital of a great empire. The various Rus' princes came to Sarai to pledge allegiance to the Khan and receive his patent of authority (yarlyk).[4] 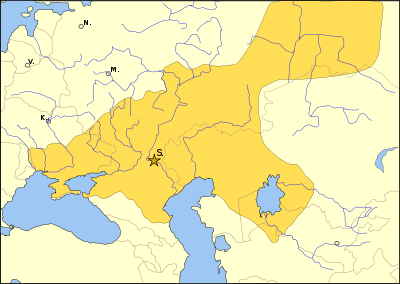 The domains of the Golden Horde in 1389. New Sarai is shown with a gold star. Empty circles depict other major cities.

New Sarai (called Sarai-al-Jadid on coins) was at modern Kolobovka, formerly Tsarev, an archeological site also on the Akhtuba channel 85 km east of Volgograd, and about 180 km northwest of Old Sarai or, maybe on the site of Saqsin (which may have itself been built on the site of the Khazar capital, Atil). The bishops of Krutitsy resided in Tsarev from 1261 to 1454. It had probably succeeded Sarai Batu as the capital of the Golden Horde by the mid 1300s.

In 1623-1624, a Russian merchant, Fedor Afanasyevich Kotov, travelled to Persia via the lower Volga. He described the site of Sarai: Here by the river Akhtuba stands the Golden Horde. The khan's court, palaces, and courts, and mosques are all made of stone. But now all these buildings are being dismantled and the stone is being taken to Astrakhan. Since Old Sarai lies at 120 km from Astrakhan and New Sarai at 300 km, it is difficult to decide to which of these two cities this description applies.

After the destruction of New Sarai, Russia established the fortress city of Tsaritsyn (now Volgograd) to control the area.

Sarai Juk (Little Sarai) was a city on the Ural River. It is often conflated with the other Sarais in historical and modern accounts. This town was the main city of the Nogai Horde, one of the successors of the Golden Horde. Although sacked by the Ural Cossacks in 1580, it was later used as the headquarters by some Kazakh khans.