The Peak District of Derbyshire has always posed problems for travel, but from 1800 when the Peak Forest Canal was built, an alternative to the long route through the Trent and Mersey Canal was sought, not only for minerals and finished goods to Manchester, but raw cotton for the East Midlands textile industry.

One scheme that had been suggested would pass via Tansley, Matlock and Bakewell. In 1810, a prospectus was published for another route via Grindleford, Hope and Edale, but since it could only promise £6,000 a year, in return for an outlay of £500,000, it was received with little enthusiasm. The problem was not only carrying a canal over a height of around a thousand feet, but supplying it with water on the dry limestone uplands.

Finally Josias Jessop, the son of William Jessop was asked to survey the route. He, his father and their former partner Benjamin Outram had gained wide experience in building tramways where conditions were unsuitable for canals, and that is what he suggested. Even so, as almost the first long distance line at thirty three miles, it was a bold venture. Moreover, to its summit at Ladmanlow, it would climb a thousand feet from Cromford, making it one of the highest lines ever built in Britain.

In 1825 the Act of Parliament was obtained for a "railway or tramroad" to be propelled by "stationary or locomotive steam engines," which was remarkably prescient, considering few people considered steam locomotives to be feasible, and George Stephenson's Stockton and Darlington Railway was barely open in far-away County Durham.

Workshops and offices at High Peak Junction - the original southern terminus, before extension of the line to the former Midland Railway now the Derwent Valley Line 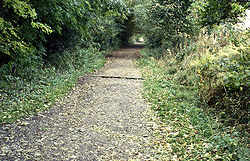 The first part of the line from the wharf at High Peak Junction, on the Cromford Canal, to Hurdlow opened in 1830. From the canal it climbed over a thousand feet in five miles, through four inclines ranging from 1 in 14 to 1 in 8 - Cromford, Sheep Pasture, Middleton and Hopton, above Wirksworth. The line then proceeded up the relatively gentle Hurdlow incline at 1 in 16 . The second half from Hurdlow to Whaley Bridge opened in 1832 descending through four more inclines, the steepest being 1 in 7. The highest part of the line was at Ladmanlow, a height of 1,266 feet (386 m). For comparison, the present day highest summit in England is Ais Gill at 1,169 feet (356 m) on the Settle-Carlisle line.

The railway was laid using so-called "fishbelly" rails supported on stone blocks, as was common in those days, rather than timber sleepers, since it would be powered by horses on the flat sections. On the nine inclined planes, stationary steam engines would be used, apart from the last incline into Whaley Bridge, which was counterbalanced and worked by a horse-gin. The engines, rails and other ironwork were provided by the Butterley Company. It would take around two days to complete the journey. Luckily it was laid to the Stephenson gauge of 4 ft 8½ inch, rather than Outram's usual 4 ft 2 in.

While its function was to provide a shorter route for Derbyshire coal than the Trent and Mersey Canal, it figured largely in early East Midlands railway schemes because it was seen as offering a path into Manchester for proposed lines from London. However, the unsuitability of cable railways for passengers became clear within a few years.

The following table lists the inclines as originally built : 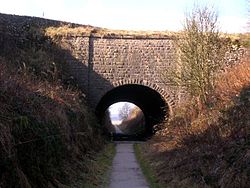 Newhaven Tunnel, constructed in 1825, took the railway under the A515. 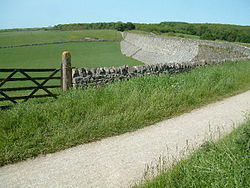 The trackbed at Minninglow. 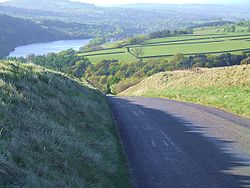 Bunsall Incline in the Goyt Valley, now converted to a road 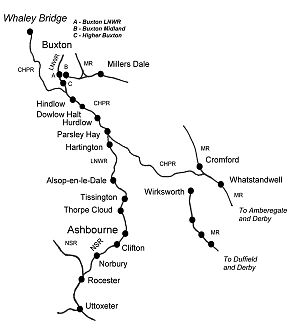 The Ashbourne line in relation to the C&HPR

Across the plateau, since the line had been built on the canal principle of following contours, there were many tight curves, which in later years, were to hamper operations. Not only did the C&HPR have the steepest adhesion worked incline of any line in the country, the 1 in 14 of Hopton, it also had the sharpest curve, 55 yards (50 m) radius through eighty degrees at Gotham.[citation needed]

The line was isolated until 1853 when, in an effort to improve traffic, a connection was made with the Manchester, Buxton, Matlock and Midlands Junction Railway at High Peak Junction just north of Whatstandwell. In 1857 the northern end was connected to the Stockport, Disley and Whaley Bridge Railway. Around this time, the people of Wirksworth were agitating for a line and an incline was built between the two. However, the Midland Railway began surveying a line from Duffield[1] in 1862 and it was never used.[2]

The C&HPR was leased by the London and North Western Railway in 1862, being taken over fully in 1887. By 1890 permission had been obtained to connect the line directly to Buxton by building a new line from Harpur Hill the two or three miles into the town centre, thus frustrating the Midland Railway's plans for a route to Manchester.

The old north end of the line from Ladmanlow (a short distance from Harpur Hill) to Whaley Bridge via the Goyt Valley was largely abandoned in 1892, though the track bed is still visible in many places and one incline forms part of a public road.

Then, built by the LNWR, the branch line to Ashbourne was opened in 1899. This utilized the section of the C&HP line from Buxton as far as Parsley Hay, from where a single line ran south to Ashbourne, where it connected with the North Staffordshire Railway. The formation was constructed to allow for double tracking if necessary, but this never happened

The line was worked by independent contractors until long after other lines, which had taken operations in house upon the introduction of locomotives. The line was initially under-capitalised because many of the subscribers did not meet their dues, and it was mainly funded by the Butterley Company which was a major supplier and its main creditor. The final cost was £180,000, more than Jessop's estimate of £155,000, but still much cheaper than a canal. Nevertheless, the line never achieved a profit. Francis Wright, the Chairman was later to say, in 1862 "We found ourselves getting into difficulties from the third year of our existence." and added it was clear in retrospect that the line "never had a remote chance of paying a dividend on the original shares." [3]

The railway's first steam locomotive arrived in 1841 in the shape of Peak, built by Robert Stephenson and Company. By 1860 the line had six more locomotives gradually displacing the horses. Because the inclines were too steep for adhesion traction by these early locomotives, they were hauled up and down the inclines, along with their trains, by static steam engines. Hemp rope or chain, initially used for hauling trains, was later replaced by steel cables.

In 1855 an Act of Parliament authorised the carriage of passengers. However the one train per day each ways did little to produce extra revenue and, when a passenger was killed in 1877, the service was discontinued. The line's prosperity depended on that of the canals it connected but, by the 1830s, they were in decline. This was, to a degree, offset by the increase in the trade for limestone from the quarries.

There were, in fact, very few accidents. In 1857, the Cromford and Sheep Pasture inclines had been merged into one, and in 1888, a brake van parted from the train near the summit. Gathering speed, it was unable to round the curve into Cromford Wharf. It passed over both the canal and the double track railway line, and landed in a field. A catch pit was therefore installed near the bottom. This can still be seen from the A6 with a (more recent) wrecked wagon still in it.

The most serious accident occurred in 1937. The line was fairly level on the approach to the Hopton Incline and it was the custom to gain speed for the uphill gradient. There was a shallow curve immediately before and on this occasion the locomotive spread the track, rolled over and down the embankment with four wagons. The driver was killed and thereafter a speed limit of 40 mph was strictly enforced.

The railway served dozens of small sidings. Towards the Cromford end of the line, between Sheep Pasture Top and Friden there were over 15 sidings, mostly grouped between Sheep Pasture and Longcliffe, primarily serving quarries. One was built in 1883 from Steeplehouse to serve the Middleton Quarry north of Wirksworth. The branch closed in 1967 but the trackbed was later used for the 18 in (457 mm) Steeple Grange Light Railway in 1985.

Towards the Whaley Bridge end of the line, another plethora of sidings lay between Dowlow Halt and Ladmanlow, mostly serving quarries and limeworks. This included some dozen sidings which lay in the short section between Harpur Hill and Old Harpur.

Traffic - by now almost exclusively from local quarries - was slowly decreasing during the Beeching era, the first section of the line being closed in 1963. This was the rope worked 1 in 8 Middleton Incline. The rest of the line was fully closed in spring 1967, including the 1 in 8 Sheep Pasture Incline and the Hopton Incline. 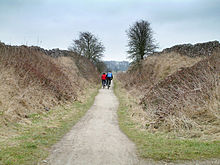 A cutting on the High Peak Trail. 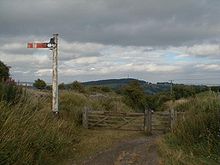 The summit of the former rope worked railway incline at Middleton top, now used as a footpath and cycle way.

In 1971 the Peak Park Planning Board and Derbyshire County Council bought part of the track bed (i.e. from Dowlow, near Buxton, to High Peak Junction, Cromford) and turned it into the High Peak Trail - now a national route of the National Cycle Network and popular with walkers, cyclists and horse riders.

The High Peak Trail (and indeed part of the Tissington Trail, below) are now also designated as part of the Pennine Bridleway, a leisure route which starts at Middleton Top, near Cromford, and includes 73 miles (117 km) through Derbyshire to the South Pennines.

The Middleton Incline Engine House has also been preserved, and the ancient engine once used to haul loaded wagons up is often demonstrated [1]. Another attraction along the route is the Steeple Grange Light Railway, a narrow gauge railway running along the track bed of a branch line off the C&HPR.

Near Cromford at the top of the town of Wirksworth, the railway passed under Black Rocks a popular gritstone climbing ground, and gave the name to the 'railway slab', a short tricky 'boulder problem' by the railway track.

At the hamlet of Parsley Hay, about 5 miles (8 km) SW of Bakewell, the C&HPR/High Peak Trail is joined by the Tissington Trail, another route of the National Cycle Network, and formerly the railway line from Buxton to Ashbourne. This 13 miles (21 km) recreational route runs from Parsley Hay to Ashbourne on a gently descending gradient.