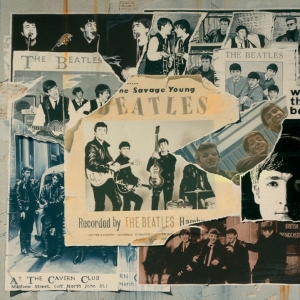 "Anthology 1" is a by and the first of a three-volume collection. It was released in November 1995 (tying in with a televised special - "" - that aired in three parts) and includes rarities and alternative tracks from the period 1958-1964, including their days as "", through the Decca auditions to the album "". Also included on this album was the produced track "", which was billed as the first "new" Beatles song in 25 years.

"Anthology 1" is of historical interest to Beatles fans for, among other things, including performances by past Beatles and . Sutcliffe, the band's original bass player who quit the group and was replaced on bass by McCartney, is featured on three tracks: "Hallelujah, I Love Her So", "You'll Be Mine", and "Cayenne". Best, who was the band's drummer until shortly after their successful 1962 audition for , is featured on tracks 10-12, 15-19, 21 and 22 on disc one. Track 22 is the original June 1962 EMI audition recording of "Love Me Do", which, after replaced Best, would be re-recorded by the group four months later for their first single.

The album was a large success throughout the world. It was the first Beatles album to officially enter the album chart straight at number 1 with 855,473 copies sold, making the 27th largest one-week sales in the history, succeeding "" by . In its second week "Anthology 1" sold 453,000 copies and maintained the top spot. This was repeated the following week, with 435,000 copies sold. In its fourth week the same quantity was sold, but the album fell to #2 behind 's "Daydream". In the following week, the album fell to #3 but with 601,000 sales. "Anthology 1" was certified 3x Platinum by the RIAA after six weeks in the U.S. market. In all, the album spent 29 weeks inside the , reached cumulative sales of 3,639,000 (scans as April 2001) and was certified 4x Platinum by the RIAA. In the UK, reaction was similar, but the album only reached #2, behind 's eponymous album. In , the album spent two weeks at number-one in December 1995.

All tracks by , except where noted.