Ordsall is an inner city area of Salford, in Greater Manchester, England. It is situated chiefly to the south of the A57 road and close to the River Irwell, the main boundary with the city of Manchester. Ordsall is bound to south by Salford Quays and the Manchester Ship Canal, which divides it from Stretford and the Metropolitan Borough of Trafford.

Historically a part of Lancashire, Ordsall was the birthplace of the bush roller chain and is home to Ordsall Hall. As of 2007, the area is being extensively re-developed in a joint urban regeneration scheme between Salford City Council and property developer LPC Living.

The name Ordsall has Old English origins being the personal name ‘Ord’ and the word ‘halh’, meaning a corner or nook, which has become the modern dialect word ‘haugh’.[1] This, indeed, describes the position of the manor of Ordsall, for its boundary on the south side is a large bend in the River Irwell which later became the site of the docks for the Manchester Ship Canal. Ordsall first appears in records in 1177 when ‘Ordeshala’ paid two marks towards an aid, a feudal due or tax.

Antiquarian and Geologist, Samuel Hibbert-Ware gave a different etymology for the name; 'ord' is a Saxon word for 'primeval' or 'very old' and 'hal' meaning 'den' - hence the name 'Ordeshal' could mean 'very old den'. His reasoning for this was the location in the area of the cave know as 'Woden's Den'.[2]

As of 2007, the area is undergoing urban regeneration under a joint venture agreement between Salford City Council and property developer LPC Living. The "Heart of Ordsall" framework, agreed in 2005, means that over the next five years extensive environmental and infrastructure improvements will be made to the Ordsall estate at a cost of around £150 million.

The regeneration is very much community led and has already delivered a new £6.5 million primary school and children's centre. The school accommodates 315 pupils and also incorporates an 83 place children's centre providing education, health, social care and day care facilities for the local community. A dedicated street sweeper, designed by local children, cleans around Ordsall three times a week in addition to the council services as a result of local concern over litter.

Between 800 and 1,000 new homes for local families and first-time buyers will be delivered, a new community hub will cover the whole of Ordsall including Salford Quays; improvements to Ordsall Park and plans for other play areas and small open spaces are also in the pipeline for 2008.

The estate will be opened up to shoppers, with the former Radclyffe School site on Trafford Road, earmarked as a new retail centre, replacing the existing district centre. There will be new pedestrian routes and cycle lanes, visibility across the area will be improved to reduce the fear of crime, and there will be improved access to nearby Metrolink stations for the Quays and the city centre.

Over £40 million has already been privately invested into the area, with the creation of hundreds of homes aimed toward first-time buyers and local residents, including Gresham Mill situated on the River Irwell, Radclyffe Mews on Taylorson Street and Quay 5, a £24 million scheme of 231 flats which sold out in just six weeks.

Despite its notorious past, Ordsall's location between Manchester city centre and Salford Quays has led to a regeneration boom. Average house prices have risen over 100% in the past 5 years, with the area in the centre of key regeneration visions such as the Irwell City Park scheme. A study commissioned by insurers More Than, published in June 2007, revealed that Ordsall had become one of the United Kingdom's property hot spots, ranking 17th out of the 35 identified. The study rated areas by looking at homes occupied by young, affluent professionals.[3] 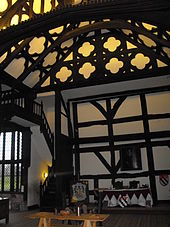 Ordsall Hall is a Tudor mansion that was for over 300 years the home of the Radclyffe family. In more recent times it has been a working men’s club and a school for clergy, the forerunner of the Manchester Theological College, amongst other uses. Like many old buildings, Ordsall Hall is said to be haunted, in particular by "the White Lady", who it is said threw herself off the balcony overlooking the Great Hall. An episode of the TV programme Most Haunted was filmed at the hall in 2002.

Ordsall is home to Salford Lads Club, which is featured on the inside cover of the album The Queen Is Dead by the pop band the Smiths. The club is on the corner of St Ignatius Walk and Coronation Street.

St Clement's Church is the Anglican parish church of Ordsall. The church was opened in 1877 and is now a Grade II listed building.[4][5]

St Joseph's Roman Catholic Church is one of the few buildings to have survived the Ordsall slum clearances. The church was designed by W. Randolph and cost £5,000 to build, equivalent to £400 thousand today.[6] It was opened on Sunday 20 April 1902. The building was severely damaged during the Manchester Blitz of Christmas 1940. The interior has been largely reconstructed and modernised since then.

St. Joseph's RC Primary School was rated as outstanding in its 2007 Ofsted report, and one of the 100 top performing schools in the UK.[7] Notable developments include a new primary school for the area, Primrose Hill, as well as an inner-city academy to be affiliated with the nearby Media City at Salford Quays.

In 1959 a young Tony Warren got an idea of a drama set on the streets of Ordsall, which ended up into the longest running soap opera in UK history Coronation Street, the whole area since then has been demolished and the only picture of it has been the photo in the background of the original credits.

Television actor Joe Gladwin, best known for his role as Wally Batty in the BBC sitcom Last of the Summer Wine, was born and brought up in Ordsall. He attended Mount Carmel RC School.