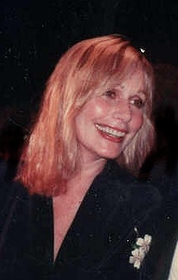 Sally Claire Kellerman [According to the State of California. "California Birth Index, 1905-1995". Center for Health Statistics, California Department of Health Services, Sacramento, California. At Ancestry.com] (born , ) is an American and known for her role as "Hot Lips" Houlihan in the film "M*A*S*H" (1970), for which she was nominated for an Oscar for .

Kellerman was born in to Edith Baine (née Vaughn) and John Helm Kellerman. [ [http://www.filmreference.com/film/48/Sally-Kellerman.html Sally Kellerman Biography (1936-) ] ] She attended , where she was "bitten by the acting bug" and went on to . She also studied at the in with and famous classmates: , , and Robert Blake.

Kellerman made her debut film in "" (1957) before starring in several classic "" episodes, "": "The Human Factor" and "": "The Bellero Shield" and also starring as Dr. Elizabeth Dehner in the second filmed of "" (1965), entitled "Where No Man Has Gone Before", opposite actors and . She also made an appearance in the science fiction series "."

Kellerman would also co-star with in "" (1968) as the only surviving victim. In 1969, she reportedly almost talked herself out of her most famous role. She had an argument with "M*A*S*H" director after reading the script. She was incensed about the way her proposed character, Major Margaret "Hot Lips" Houlihan, was to be humiliated. Altman said that her attitude and passion was exactly what he was looking for in that character.

already had a recording contract with when she was eight. After giving another signature performance in ’s "", she cut her first demo with then jumped straight into the with /producer to record "", an by .

Kellerman contributed her vocal talent in the musical film, "Lost Horizon" (1973) in which she collaborated with , and , the was released by .

Currently touring local spots, Kellerman plans to release another album in which she works side by side with her musical director, .

Kellerman was married to director from 1970-1971, and from 1980 to producer . Kellerman has one daughter, Claire, her niece she adopted in 1976, when Sally's sister, Claire's birth mother, moved to France and Claire's father died 2 days after giving permission for the adoption. She is a mother to adopted twins with Krane. Krane also adopted Claire in 1987.