Ukrainian cuisine has significant diversity, historical traditions. "Cuisine - Flavors and Colors of Ukrainian Culture."] Ukraine.com. Accessed July 2011.</ref> Common foods used include meats, vegetables, mushrooms, fruits, berries and herbs.[1][2] In Ukraine, bread is a staple food, there are many different types of bread, and Ukraine is sometimes referred to as the "breadbasket of Europe."[1] Pickled vegetables are utilized, particularly when fresh vegetables aren't in season.[1] 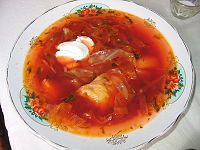 Ukrainian Borscht soup, made from beetroots and other vegetables, with meat.

Breads and wheat products are very important to Ukrainian cuisine. Decorations on the top can be very elaborate for celebrations. 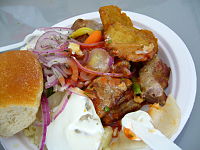 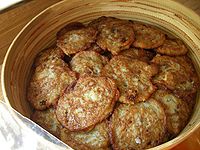 Deruny or draniki are potato pancakes, here in a traditional crockery dish. 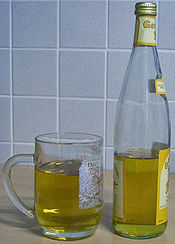 Ukrainian settlers from Galicia and Bukovyna arrived in Canada in the late 1890s. Many of the ingredients they had been used to cooking with (such as wheat flour, barley, rye, cabbage, and root vegetables) could be grown in their new land, but others could not. Although the parklands of the Prairie Provinces were fertile, they were also much further north and higher in altitude than the settlers' old homeland, and the growing season was consequently much shorter.[4] This made the cultivation of crops such as buckwheat, plums, grapes, nuts, and poppies difficult if not impossible. The shorter growing season also meant that the traditional spring and autumn festivals meant to celebrate the beginning and end of the growing season often fell in the dead of winter. In addition, the semi-arid climate reduced the amount of honey and mushrooms available.

The settlers adapted to local conditions, substituting available ingredients for those not obtainable. Dried fruit such as prunes and raisins were used instead of fresh; short-season vegetables such as tomatoes and peppers were incorporated into recipes. Meats such as turkey, goose, duck, and local species of fish were originally used in substitution for pork, as there were initially few pork producers; later on, the immense amount of beef available on the Western Canadian (and especially the Alberta) market and its correspondingly low price meant that Ukrainian cooks were more likely to cook with beef than with pork or, especially, lamb. Attempts, many successful, were made to cultivate traditional ingredients such as poppy seed, honey, and mushrooms; once the settlers had begun to sell their grain crops and had ready cash, they often imported these items from further East as well.

These changes are evidenced in Ukrainian Canadian cuisine. Cabbage rolls or holubtsi may be made from parboiled or pickled cabbage leaves—both fresh and pickled whole cabbage is available in almost all supermarkets on the Prairies—but the most common filling is a mixture of ground beef and rice, with pork a less common substitute. The rolls are often cooked in a tomato sauce which may be flavoured with peppers. Perogies (the standard Canadian English word for varenyky) are usually filled with a combination of potato, onion, and Canadian-made cheeses such as Cheddar, Colby, or Monterey Jack, but are rarely filled with fruit or grains. (The popularity of perogies reaches far beyond the Ukrainian Canadian community; most supermarkets carry a dozen or more different kinds of mass-produced frozen perogies, and they are a common side dish.) Borscht may be beet or tomato-based. Desserts are less likely to be made primarily from ground nuts, and may instead be made from plain flour. Ukrainian sausage (known as kubasa) is heavily seasoned with garlic and Hungarian paprika and is used both in home cooking, restaurant cooking, and even fast food.