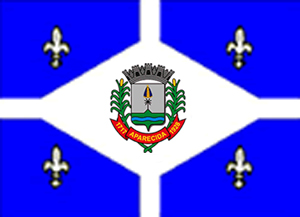 Aparecida is a ian city and municipality in the state of São Paulo. It is located in the fertile valley of the River on the southern (right) bank. The population in 2004 was 35,754 (estimated) and the area of the municipality is 121.232 km². Sometimes is referred as "Aparecida do Norte".

Aparecida is located 168km northeast of and 240km southwest of .

With an average altitude of 544 meters, and elevations varying from 525 to 620 meters, Aparecida has a hot climate with dry winters. Recorded temperatures are a maximum of 35º, a minimum of 9º and an average of 22º.

It is home to and named after the Basilica of the National Shrine of , the of Brazil, declared so by in 1929. delivered a speech here in May, 2007.

Once part of the municipality of it was emancipated in 1928. It now depends exclusively on tourism generated by the devotees surrounding the statue of the Virgin. Aparecida receives more than 7 million tourists a year making it the most popular religious pilgrimage site in Latin America. These pilgrims come to visit the Basilica containing the statue of Our Lady of Aparecida. This statue, thought to have been found in the Paraíba River in October 1717, is made of clay and measures 40 centimenters in height. The dark colour was produced by the years of exposure to candles and lamps around the altar. In 1978 it was attacked and reduced to hundreds of fragments which were meticulously put back together by specialists from the Museum of Sacred Art of São Paulo.

A visit to the new Basilica is a must-see if only for the vastness of its dimensions. The room is especially interesting as it is lined from floor to ceiling with every possible wax representation of the human body conceivable. A room filled with pictures showing how people were cured or survived accidents with the Virgin's intercession is also worth seeing.

The city has other attractions besides the religious buildings such as a theme park, aquarium, and museums.

Among the local events are the Festa de Nossa Senhora Aparecida, on , which attracts more than 100,000 faithful, and the Festa de São Benedito, which has performances by several folkloric groups.