The Dodge SRT-4 is a sport compact car manufactured by Dodge from 2003-2005. A turbocharged variant of the Neon,[1] the car was developed by DaimlerChrysler's in house PVO (Performance Vehicle Operations) tuner group. PVO was officially renamed SRT (Street and Racing Technology) in 2004. The "4" in the SRT-4's name denotes the number of cylinders of the engine.[2] ACR (American Club Racing)[3] and Commemorative Edition[4] models were later introduced as well.

The production SRT-4 was introduced in 2003. At the time, the car was the second fastest stock production vehicle in the Dodge lineup, second only to the Viper. Built in Belvidere, Illinois with 84% US content, the SRT-4's entire powertrain (engine and transmission), suspension, braking system, exhaust, wheels, tires, and a small portion of the interior were upgraded from the base model Neon.[citation needed] On the outside, the SRT-4 also featured a unique front fascia and hood, featuring a functional hood scoop. The car also featured side skirts, a unique rear fascia, large rear wing, and model-specific 17x6 inch wheels.

Under the hood was a turbocharged 2.4 L inline-4 gasoline engine. This engine was nearly identical to the 2003 Chrysler PT Cruiser GT (A855 engine), though the SRT-4 version (A853 engine) did not have the unique intake manifold required to package the engine in the compact PT Cruiser engine bay. The SRT-4 used a New Venture Gear T-850 five-speed manual transmission (based on the unit from the European turbodiesel minivans), equal-length half shafts, and a high-capacity Sachs performance clutch. The suspension used stiffer springs, SRT tuned Tokico struts (with travel reduced to provide clearance for the large wheels), larger sway bars front and rear, a unique steering gear, PT Cruiser steering knuckles, and a unique K-member. 11.0 in (280 mm) vented disc brakes (with extra-thick rotors to prevent warping) were used in front, with 10.6 in (270 mm) non-vented discs in the rear.[citation needed]

Inside, the front seats featured enhanced lumbar and lateral support for performance driving, and a faux carbon fiber steering wheel, shift boot, and satin silver "cue ball" shift knob were used. The gauges had special SRT faces and silver rings matching those on the climate controls. An Auto-Meter brand boost gauge was used as well. The front windows were power operated, while the rear windows were manual.

With the demise of the PL platform after model year 2005, the SRT-4 ceased production. In 2008 Dodge introduced the Caliber SRT-4 as a replacement. 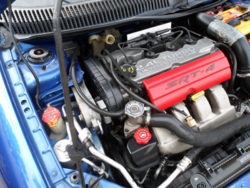 17 × 6-inch cast aluminum wheels with an offset of 43 mm, coupled with 205/50/17 Michelin Pilot Sport tires helped put the power to the ground on 2003 models, with 2004 and 2005 models getting BF Goodrich KDW2 tires. Even wider 225/45/16 BF Goodrich KDW2 tires on lightweight BBS racing wheels (40 mm offset) were offered on the ACR model in 2005. The standard 17 in (43 cm) wheels were purposely designed to look like aftermarket wheels, and the unique spoke pattern allowed for better airflow to the brakes. The design showed much similarity to the TSW VX1 wheels found on the 2001 concept supercharged Neon S-R/T.

The SRT-4 used an identical block as the naturally aspirated Chrysler 2.4 L block used in the PT Cruiser and mid-size cars such as the four-door Stratus. Both naturally aspirated and turbo engines (PT Cruiser GT Turbo and SRT-4) used the same cylinder head with the exception of the Inconel exhaust valves. The PT Cruiser Turbo engine package differs from the SRT-4 because the intake manifold, turbocharger plumbing and intercooler are different. The SRT-4 intercooler was a front-mounted cast aluminum 8-row unit produced by Valeo. The turbocharger was a reverse rotation Mitsubishi TD04LR-16Gk with a 6 cm2 (0.93 sq in) turbine inlet. Tight packaging forced some creative thinking on the turbocharger. The TD04 compressor has a compressor bypass valve built right into the compressor housing. The exhaust manifold and turbine housing were cast in one piece by Mitsubishi from high-nickel Ni-Resist steel. The one-piece design improved flow, reduced size and reduced thermal mass for quicker cat light-off. The turbine discharge was also part of the manifold/turbine housing casting, and it looped back around and hit the manifold again on its way to the catalytic converter. Where they met, there was a wastegate valve; keeping the wastegate valve away from the turbine housing improved flow where it mattered most. Maximum boost in stock form was around 14 psi (97 kPa). Piston velocities and valve-train components force a rev limit of 6240 rpm although MOPAR upped the ante with their Stage 2 and 3 kits which have a rev limit of 6500 rpm.[15]

The exhaust system for the vehicle consists of 2.25-inch (57.15 mm) steel tubing, which is run first through the catalytic converter, then through two resonators. The exhaust then splits into two separate sections of piping, exiting through two 3.75 in (95 mm) stainless steel tips at the rear of the vehicle. The exhaust system is unique in that it does not rely on a muffler for noise reduction, instead relying on the turbocharger and resonators to reduce the exhaust volume. The end result is a very distinctive and audible exhaust note, specific only to the SRT-4.

Of note aesthetically, when Dodge was redesigning the SRT-4 pre-production car in late 2002 prior to its release, they added two vents (Nostrils) on the front fascia to help with the upgraded cooling system, a revised boost gauge face, and standard pedals instead of the aluminum ones that would be used on later SRT-4s.

Inside the cabin, the SRT-4 front seats had enhanced lumbar and lateral sections for better support during racing-type maneuvers, modeled after the Dodge Viper SRT-10's seats. The agate-colored cloth on the body of the seats was textured for better grip through the corners. The side bolsters of the front seats were trimmed in vinyl and curved to stabilize occupants. The car's rear seats also featured the textured fabric. Another seating option available was side-impact air bag equipped seats with an identical fabric and vinyl design with less pronounced side bolsters.

Unique gauge designs in the SRT-4 (which were exclusive to the SRT lineup) featured special silver faces with satin silver ring accents. The same satin metal trim was also featured on the instrument panel center stack, climate control knobs and on the door handles. A silver Auto-Meter brand turbo boost/vacuum gauge was to the right of the instrument cluster.

In 2003, Cory O'Brien and Erich Heuschele drove an SRT-4 to a 1st in class and 8th overall finish in the Tire Rack Cannonball One Lap of America.[23]

In SCCA ProRally racing, the SRT-4 (and more recently the ACR version) has dominated the Group 5 (2WD) class since 2003.[24] In just its first year competing, the Dodge ended the stranglehold that the FWD DSMs and Volkswagens had on the class. With three competing the following year, the SRT-4 won every 2004 series race and end-of-season award.[25] The SRT-4 has won every Group 5 and 2-Wheel-Drive class championship in US ProRally and Sno Drift since 2003, and its unprecedented dominance in 2004 helped Dodge earn its first US ProRally Manufacturers Championship in 28 years.[26]

In 2005, Jeff Lepper drove the SRT-4 to its first ever national road racing win in the NASA US Touring Car Championship at California Speedway in Fontana.[27]

In 2005, Dale Seeley, Kolin Aspergren, and Jamin Cummings drove an SRT-4 to a 1st in class and 8th overall finish in the Tire Rack Cannonball One Lap of America.[28]

In 2006, the Dodge SRT-4 officially became the world's fastest production 4-cylinder car, averaging 221 mph (356 km/h) at the Bonneville Salt Flats in Utah in a car built by Dave Harris and Phil Hurst for Racedeck Racing.[29] 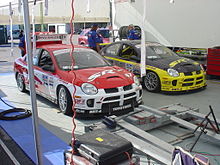 Multiple SRT-4s were raced in the SCCA SPEED World Challenge - Touring Car Series,[30] and in 2006 - their second year of competition - had become one of the more successful platforms in the series. Robb Holland, of 3R Racing, became the first Pro driver to put the SRT-4 on the podium with his 3rd place finish at Road America in August 2006. This was Dodge's first podium and first manufacturer's points in World Challenge Touring Car competition. Holland would finish the season with 3 top 10 finishes and two top 5 qualifying efforts in the SRT-4.[31][32]

In 2007, Doug Wind, Devin Clancy, and Ken Brewer drove an SRT-4 to a 1st in class and 5th overall finish in the Tire Rack Cannonball One Lap of America.[33]

In 2007, Curt Simmons won the U.S. Touring Car Championship in an SRT-4 [34] and Dodge won the season manufacturers points championship by 29 points over Honda behind the strength of several SRT-4's.[35]

In 2008, Curt Simmons attempts to defend his USTCC series championship, winning most recently June 29, 2008 at Infineon Raceway in Sonoma, CA.[37]