Chicken McNuggets (introduced in 1983 with support from the McNugget Mania campaign) are a product offered by international fast-food restaurant chain McDonald's and are one of the most popular trademarked items on the McDonald's menu.

McNuggets are small pieces of chicken that have been battered and deep fried. They are sold in packages of 4, 6, 10 (9 in the United Kingdom, Italy, Netherlands, Germany, Singapore, Indonesia, Switzerland, Hong Kong, Czech Republic, Russia, Norway, Pakistan, Sweden, Poland and Bosnia and Herzegovina) and 20. In June 2011 McDonalds brought back the 20 piece for a short time. In New Zealand, and Australia, they are also available in 3 packs in Happy Meals and Heart Foundation approved Tick healthy meals. They come with a choice of various flavors of dipping sauce (Pure Honey, Tangy Barbeque, Sweet n' Sour, Honey Mustard, Spicy Buffalo, Sweet Chili, and Creamy Ranch). They have recently been introduced in India, first as a part of its "Breakfast Meal" and later in the regular menu in May 2009. 50-piece McNuggets meal deals have been promoted at times for special events such as U.S. football's Super Bowl, but are not maintained on the menu.[1]

McDonald's first Executive Chef Rene Arend created Chicken McNuggets in 1979. “The McNuggets were so well received that every franchise wanted them,” said Arend in a 2009 interview. “There wasn’t a system to supply enough chicken.” [3] Supply problems were solved by 1983, when Chicken McNuggets became available nationwide.[4]

In a 2002 lawsuit against McDonald's, a judge commented that Chicken McNuggets are a "McFrankenstein" creation of various elements not used by the home cook.[7] The judge threw out the lawsuit, suggesting that the plaintiffs could try again if they could prove McDonald's food was an added hazard to the average consumer, rather than just a mix of scary sounding vitamins and natural flavor extracts. The judge identified that rather than being merely chicken fried in a pan, McNuggets included elements not utilized by the home cook, including the unusual sounding ingredients like: extracts of rosemary, vitamins (niacin, thiamine mononitrate, riboflavin, folic acid), leavening (baking soda, calcium lactate, etc).[8] 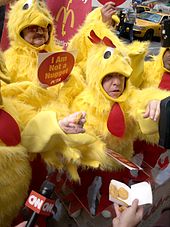 The 2004 documentary Super Size Me states "McDonald's Chicken McNuggets were originally made from old chickens no longer able to lay eggs. These chickens are stripped down to the bone, and then 'ground up' into a chicken mash, then combined with a variety of stabilizers and preservatives, pressed into familiar shapes, breaded and deep fried, freeze dried, and then shipped to a McDonald's near you." Super Size Me also alleged inclusion of chemicals such as tertiary butylhydroquinone (a phenolic antioxidant used as a chemical preservative), polydimethylsiloxane (an anti-foaming agent), and other ingredients not used by a typical home cook.[9] This was recently restated by CNN.[10]

Marion Nestle, a New York University professor and author of What to Eat, says the tertiary butylhydroquinone and dimethylpolysiloxane in McNuggets probably pose no health risks. As a general rule, though, she advocates not eating any food with an ingredient you can’t pronounce.[10]

As of October 9, 2010, dimethylpolysiloxane and Tert-Butylhydroquinone (TBHQ) are listed as ingredients in the McNuggets cooking process.[6] According to Lisa McComb, a media relations representative for McDonald's, dimethylpolysiloxane is used as a matter of safety to keep the frying oil from foaming. The chemical is a form of silicone also used in cosmetics and Silly Putty. A review of animal studies by the World Health Organization found no adverse health effects associated with dimethylpolysiloxane. TBHQ is a common preservative for vegetable oils, cereals, nuts, cookies, chips, and animal fats,[11] found in everyday foods like Girl Scout Cookies[12] and Quaker Chewy Granola Bars[13]. The U.S. Food and Drug Administration sets an upper limit of 0.02% (0.0002) of the oil or fat content in foods,[14] which like other foods, applies to the oil used in McNuggets. Effective use of TBHQ is 1 gram per 5000 grams of cooking oil (1 gram per 11 pounds of cooking oil). One gram (one-thirtieth of an ounce) can cause "nausea, vomiting, ringing in the ears, delirium, a sense of suffocation, and collapse," according to A Consumer’s Dictionary of Food Additives[10], though the book neglects to indicate you would need to ingest 11 pounds of cooking oil in one sitting in order to achieve this. Application to the skin may cause allergic reactions[15] and industrial workers exposed to the vapors suffered clouding of the eye lens, without other obvious systematic effects.