Adrian College is a private, co-educational liberal arts college related to the United Methodist Church in the city of Adrian, Michigan. 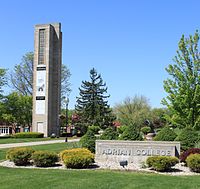 The school is approximately a 45-minute drive from Ann Arbor and Toledo, Ohio, and 90 minutes from Detroit. Its campus is on approximately 100 acres (0.4 km²) and features newly constructed facilities with modern designs and historic buildings recognized for their past, such as Downs Hall, home of the Theatre Department.

The college had its origin as a theological institute founded by Wesleyan Methodists at Leoni, Michigan, in 1845. This institution merged with Leoni Seminary, another Methodist school, in 1855 to form Michigan Union College. In 1859, that institution closed and its assets were transferred to Adrian to establish Adrian College. The college was chartered by the Michigan Legislature on March 28, 1859, under the first president of the college, abolitionist Asa Mahan. In the early stages of the American Civil War the college volunteered itself as a base for the formation of Michigan regiments for the Union side. The current Valade Hall building sits on the site of the former base camp for these soldiers.[1]

In 2009 Adrian College celebrated its 150th anniversary. The celebration was to recognize the success and the traditions of this college.

The senior class president, Zachary Hamilton, and senior class vice-president, Stephen Kish, presented Adrian College with a time capsule on behalf of the Class of 2009. It was buried next to the clock tower and is to be opened in 50 years. The time capsule has contents including technologies and newspapers of this generation.[2]

The college is accredited by the North Central Association of Colleges and Schools and, as of the fall 2010 semester, has an enrollment of 1654 students.

Adrian College has a long history of social activism, which is highlighted in its mission statement:

"Adrian College, a liberal arts College in the United Methodist tradition, is committed to the pursuit of truth and to the dignity of all people. Through active and creative learning in a supportive community, students are challenged to achieve excellence in their academic, personal, and professional lives, and to contribute to a more socially just society."

Adrian College's institutes integrate theoretical and practical learning in distinctive and challenging ways. They are intended for students who desire academic work focused in a specialty area. Students and faculty affiliated with the institutes engage in ongoing dialog and collaborate on initiatives — developing integrated research projects, engaging in public service, as well as learning from alumni or friends of the college who act as professional mentors and advisers.Institutes, Adrian College

Adrian College athletic teams, nicknamed the "Bulldogs," are part of the Michigan Intercollegiate Athletic Association and the National Collegiate Athletic Association Division III. The men's NCAA Division III hockey team is a member of the Midwest Collegiate Hockey Association. The men's lacrosse team is part of the Midwest Lacrosse Conference. Adrian College is the third college or university to offer women's hockey as a varsity sport in Michigan. In 2011, the College reached an agreement with the federal Department of Education's Office of Civil Rights, resolving complaints that the College had violated Title IX. The College was found guilty of eleven violations of the law that governs gender equality, and agreed to make several changes to its athletic programs.[5] Adrian College offers the following varsity sports:

The men's Division III team received national attention on the eve of Selection Sunday of the 2007–08 season on ESPN's "The Sports Reporters" as Mitch Albom, columnist from the Detroit Free Press, used his closing remarks to highlight the remarkable ride of the hockey team's season (their first at the NCAA level). The team finished 26-3 and did not make the NCAA Division III Tournament. The 2008 Baseball team won the Mideast Regional championship claiming the first regional title in the program's history and for any team at Adrian College. They are also the first representative team from the MIAA in the national tournament.

Intramurals are part of Adrian College and the athletic department. Some of the intramural teams include Flag Football, 5-on-5 Basketball, Coed Volleyball League, Broomball, Coed slow Pitch Softball, 7-on-7 Soccer, 8-on-8 Dodgeball, 6-on-6 Wiffleball, and 3-on-3 Basketball.[10]

On June 30, 2005, Stanley P. Caine retired after 16 years as president of Adrian College. The next day, Jeffrey Docking became Adrian College's 17th president, after serving as a vice president at Washington and Jefferson College in Washington, Pennsylvania. Since arriving at Adrian, Docking has introduced many plans to revitalize Adrian College and its campus, including construction of new buildings, renovation of old ones, and programs related to athletics such as the construction of a new Arrington Ice Arena. Many of these initiatives are grouped under his "Renaissance Project".[11]

Docking's initiatives and related changes have caused some controversy. The decision to introduce mandatory four-year residency for all students "to raise funds" is a departure from previous policies.[12] At a town hall-style meeting between students and administration concerning the drastic changes in housing policy, the Dean of Student Life declared that the new policy was essential because Adrian College had been in imminent danger of closing, thus rendering any Adrian degree "worthless."[13] In contrast, deposits for fall 2007 exceeded 550 by July 2007.

Renaissance II has begun with a focus on academic enhancements. An all-college retreat in August 2008 in Dearborn was used to help set priorities for new initiatives, such as a series of institutes. The goal of Renaissance II is to enhance the academics at Adrian College to better prepare students for excellence and success in the ever-changing world. The college is making renovations and expansions to the Science, Business, Visual Arts, and Performing Arts departments.[14]

Hail Adrian! -Hail, hail to Adrian- the home of the black and gold!- cheer, cheer for Adrian- lift your voices, proud and bold,- "Go, dawgs go!" -Fight, fight for Adrian- and champions again we will be!- our heroes will score, and the crowd will roar,- "Another bulldog victory!"

The fight song was written by Adrian alumni Darin McNabb. The fight song made its debut on October 6, 2007 when the Adrian College football team took on Olvet College in a tight battle for that homecoming evening.[16]

Bruiser the Bulldog is a live mascot that Adrian College adopted on December 14, 2009. Bruiser's hometown is Bristow, OK. He was born on Septemper 20, 2009. His caretaker is Adrian's Janine Grier. His official introduction to the college was on January 22, 2010 at the men's varsity hockey game.[17]