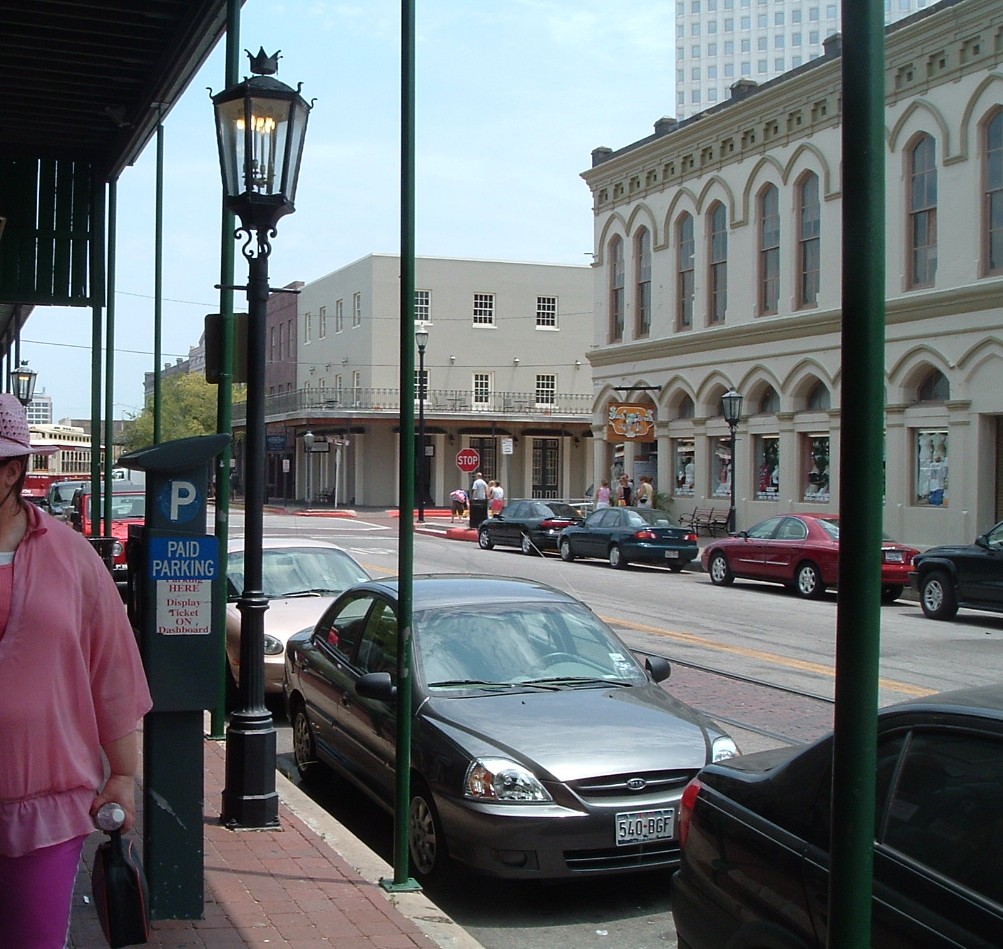 The Strand District, in downtown Galveston, (USA), is a National Historic Landmark District of mainly buildings that now house restaurants, antique stores, and curio shops. The area is a major for the island city and also plays host to two very popular seasonal s. It is widely considered the island's shopping and entertainment center.

The street labeled "The Strand" is actually named Avenue B, which runs parallel to .

The original of Galveston, drawn in the late s, includes Avenue B, but the origins of its nickname are unknown. Some have speculated that it was named after the well-known Strand in . (The word "strand" comes from the Old English word for "shore" or "river bank"; in German, Swedish and Dutch, the word means "beach".)The Strand's very earliest buildings were typically wooden and vulnerable to fires and storms that hit the island frequently throughout the . Eventually those structures were replaced with iron-fronted brick buildings. The two oldest buildings still standing on the Strand date to 1855 and 1858; other historic buildings date back typically to the and .

Throughout the , the port city of Galveston boomed; and the Strand, which is very close to the harbor, grew into the region's main business center. For a time, it was known as the "Wall Street of the Southwest."

Because of the port of Galveston's enormous vessel traffic (between 700 and 1,400 vessels annually), the Strand became a popular place for major businesses to locate, including the state's five largest banks at the time, wholesalers, commission merchants, cotton brokers, attorneys and slave auctioneers. In 1881, businesses in the Strand district sold about US$38 million worth of merchandise and services. Between 1838 and 1842, 18 newspapers were started; The Galveston News, founded in 1842, is the lone survivor.Because of the Strand's close proximity to Galveston's harbor, the area suffered some damage during several battles during the Civil War, particularly when Union forces barricaded the city. During the , Confederate forces fought from every corner of the area; several buildings suffered damage from shots and shelling. The battles forced many businesses to close and move to nearby Houston until the war's end. But most moved back into their regular quarters and enjoyed prosperity until the turn of the next century.The was devastating to much of the city, and the Strand district was no exception. Many of its buildings suffered catastrophic damage &mdash; some buildings lost entire floors, others lost elaborate cornices and flourishes. Many businesses elected to move away from the wharf and, by default, away from the Strand. The area became a warehouse district, and was not revived until the when the of Galveston County restored two buildings.

That restoration effort sparked a revitalization project that is still ongoing. In 1973 the Galveston Historical Foundation followed suit, creating a trust fund for dramatic restorations of the Strand district that has sparked significant private investment as well.

Today the Strand features shops, historical exhibits, museums, art galleries and many restaurants and night clubs. It is also the location of a very popular annual celebration, as well as a festival known as , which celebrates the city's Victorian heritage with actors roaming the streets of the Strand in period dress.

Attractions within the area include The Galveston County Museum, the , , horse and carriage rides, historical markers, an old fashioned trolley for transportation, and a giant set in . The historic district also contains a variety of retailers, including clothing, factory outlets, souvenir shops, art galleries, antique galleries.

On the outer edges of the Strand is the Post Office district, known for its antique and art galleries and the . Closer to the water is Pier 21, which has daily showings of the movie "The Great Storm of 1900", the , and the Texas Seaport Museum with tall ship Elissa.