The Class 180 is a type of British diesel multiple unit train built by Alstom between 2000 and 2001 for use on then-new express services by First Great Western (FGW). They were built at Washwood Heath in Birmingham and are part of the Coradia 1000 family along with the Class 175. FGW stopped using the class on 27 March 2009, and they are now employed by other operators. The Class 180s were given the name Adelante on entry into service with FGW, a name devised by First Group that they retain with First Hull Trains.

In the late 1990s, FGW was keen to increase to half-hourly the frequency of its express service from London Paddington to South Wales. This required extra high-speed rolling stock, but there was little available. FGW therefore decided to order 14 new 125 mph diesel multiple units from Alstom, similar to the 26 Class 175s already under construction for sister company First North Western.[2] The order reportedly cost £74.5 million; financing was organised by Wiltshire Leasing, another subsidiary of First Group.[2]

The first unit, 180101, was unveiled on 18 April 2000.[2] However, following a string of problems, full main line testing did not begin until December 2000, six months after it was intended to start.[6] Despite this, Alstom claimed that the trains could enter service in time for the May 2001 timetable change.[6] This date too was missed, and the trains did not go into squadron service until the next timetable change, in December 2001.[7] 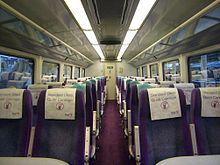 There are 14 Class 180 trains, numbered 180101-180114. There are five cars per unit. Each unit consists of two Standard Class Driving Motor, two Standard Class Intermediate Motor and a First Class Intermediate Motor. All coaches are equipped with a Cummins QSK19 diesel engine which develops 560 kW (750 hp) at 2,100 rpm,[1] identical to that found in the Voyager family of DEMUs as well as in the Siemens Class 185 DMUs used by First Transpennine Express.

Unusually for such a fast train, they feature a hydraulic transmission,[4] supplied by Voith which is a three-speed type, with integral hydrodynamic braking (rated at 750 kW short term, 420 kW continuous). One bogie per coach is powered, with both axles driven. Total vehicle weight is 278 tonnes.[1] 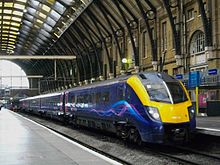 First Hull Trains acquired two Class 180 units to replace a damaged Class 222 Pioneer which operated in parallel with the remaining Class 222s on services between London King's Cross and Hull. In 2008, the Department for Transport decided that First Hull Trains Class 222s should be cascaded to EMT and replaced with Class 180s by the end of 2008.[8]The acquired units have undergone an internal refit including the installation of laptop sockets and new coffee machines. The first of the refurbished units began operation in late January 2009. The refurbishment was completed in early 2011.[9] 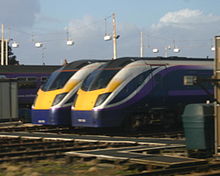 Northern Rail added three Class 180 units to its fleet in October 2008 for crew training with the sets entering service in December 2008 to operate services from Hazel Grove and Manchester Victoria to Preston and Blackpool North until the end of 2010. These units are sub-leased by East Coast to Northern until it can obtain more long-term rolling stock.[10] The three units sub-leased to Northern Rail were to have transferred to East Coast after the 18-month contract finishes in November 2010. However, East Coast has changed its plans and no longer requires them, so they will stay with Northern until May 2011 when it is hoped Northern will have taken delivery of ex-London Midland Class 150 DMUs.[11] 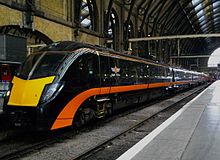 Grand Central operates a pair of Class 180s for use on its London to Sunderland route, having secured the rights to a fourth daily service in each direction.[12] The two 180s join the company's three high-speed trains (HSTs).[13] The company had initially announced the two units would run as one, giving a ten-car train, but later said they would run separately for extra flexibility to the fleet.

Grand Central also acquired three additional units for its new service to Bradford Interchange.[14] Originally the service was to be operated under the brand name Grand Northern, as part of parent company Grand Union, but is instead operating as Grand Central, so that units can be interchanged between the two routes.

The units have been modified by Railcare and fitted with wi-fi and at-seat plug sockets.[15] The first unit to be refurbished was 180114. One of the initial two units, number 180112, was named James Herriot at a ceremony at London King's Cross and is the first to carry Grand Central's new logo[15] and orange stripe livery. They entered service in September 2009, with the Bradford service starting on 23 May 2010.[16] A second unit, 180107, was named Hart of the North in October 2010 following a competition in the Hartlepool Mail.[17] 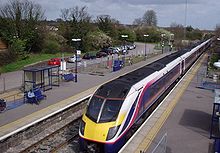 The Class 180 fleet, given the name Adelante by FGW, was originally deployed on First Great Western services linking London Paddington to Bristol Temple Meads via Bath Spa and to Cardiff Central via Bristol Parkway.[7] The class suffered a number of technical problems, including problems with the doors closing and locking quickly.[18] This resulted in their replacement on most of the above services with HSTs displaced from Midland Mainline. The Class 180s then operated express commuter services from London Paddington to Oxford, Worcester, Hereford (via the Cotswold Line), Exeter St Davids and Gloucester.

The reliability problems experienced by FGW, combined with increased passenger numbers, eventually led the operator to lose patience with the class and instead to acquire extra refurbished HST sets towards the end of 2007 as replacements to operate the express commuter services.[18] As a consequence, First Great Western returned most of the Class 180 fleet to the leasing company Angel Trains in early 2008.[19]

Although FGW had planned to return the entire fleet for storage, it decided to retain three Class 180 units until it had received a cascaded HST from National Express East Coast.[19] These units were usually operated in multiple, with a 2x5-car train plus one 5-car unit as a spare, on the Cotswold Line from Paddington to Worcester and Hereford.[20] The final FGW 180 ran on 30 March 2009.[21]

Five Class 180 units were planned for use by East Coast in 2009/10. After this proposal was abandoned, it was announced that the five units will be transferred back to First Great Western, to increase capacity on Thames Valley services.[22]

National Express East Coast requested additional services to a number of destinations in its application for access rights on the East Coast Main Line (ECML) in March 2008, stating that, in addition to its existing InterCity 125 and InterCity 225 sets, it would require as many as nine Class 180s.[23] The routes proposed to use class 180s were London to Lincoln (with one train per day extended to Cleethorpes) and London to Harrogate via York. Although NXEC no longer exists, its successor East Coast pressed ahead with the plans, and managed to secure five units, three of which were temporarily sub-leased to Northern (see above).[10] However, it recently announced that, due to government cuts, it would no longer be introducing a regular all-day service to and from Lincoln, which the units had been planned to operate.[24]

Platinum Trains had aimed to use 180s on an Aberdeen to London service, if its track access application was approved.[25] However, the application was refused in January 2009.[26]

Virgin Trains leased two units from Angel Trains in 2008, intending to use them as standby units on the West Coast Main Line following the loss of a Class 390 Pendolino unit in the Grayrigg derailment.[27] The units, described as 'strategic standby' units by the company, were returned to Angel Trains without being used following a decision to use a Class 90 locomotive and Mark 3 coaching stock instead.[27]