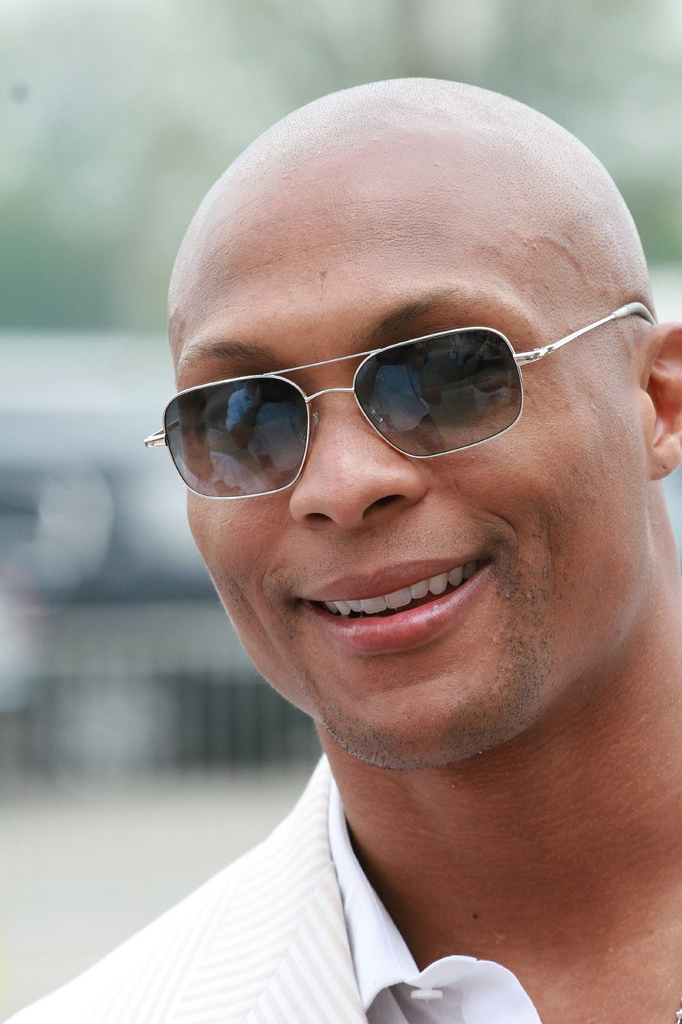 Edward Nathan George, Jr. (born , ) is a former of the NFL. He played for the both in Tennessee and in Houston when the franchise was known as the Houston Oilers, and spent his final season with the . He is best known for his career with the and as a winner at the .

George was born in . He attended until the 12th grade. Soon he transferred to . George made the decision to stay at Fork Union Military Academy for a fifth prep school year. Such choices are commonly made by high school football players hoping to improve their recruitment status with colleges, but for George it meant another year of vigorous military lifestyle. George went on to rush for 1,372 yards in his fifth season at FUMA, attracting the attention of several major colleges. He went on to attend college at .

As a freshman running back for the Buckeyes, George was an instant contributor. He scored 3 rushing touchdowns in a win over . However, he suffered a major setback in a game against the University of Illinois. In that game, George committed a fumble at Illinois 4-yard line that was returned 96 yards for a touchdown. Later in the game, with Ohio State leading by 2 points in the final quarter, George committed another fumble, this one on Illinois' 1-yard line. Illinois recovered the fumble and drove for the game winning touchdown.

Before the Illinois game, George had carried the ball 25 times and scored 5 touchdowns, but for the rest of the season, he had only 12 more rushing attempts and didn't score once. In the following season, George was used as the team's third string running back, behind . He carried the ball only 42 times, mostly when Ohio State had a large lead late in games. However, as a junior, George became the team's starting running back and went on to rush for 1,442 yards and 12 touchdowns.

As a senior in the 1995 season, George rushed for a school record 1,927 yards and 24 touchdowns, an average of 152.2 yards per game. One of his best performances of the year was in a 45-26 win over the , where he rushed for 207 yards, his third 200 yard game of the season. He also rushed for a school-record 314 yards and scored 3 touchdowns in OSU's victory over Illinois. In the 3 years since committing his 2 fumbles in the Illinois game as a freshman, George had over 600 rushing attempts and fumbled only 6 times. Ohio State finished the season with an 10-2 record and George won the in the closest vote in the history of the award at the time, beating 's by 264 ballots. George lost his last two games as a Buckeye. Tim Biakabutukua showed him up by going off for a 313-yard rushing effort, which helped Michigan upset the previously-undefeated Buckeyes. Then the University of Tennessee Volunteers won 14-20 in the Florida Citrus Bowl. George's ineffectiveness was a key to the Vols victory. Following the season, he was the first-round draft selection of the (now the ). George left Ohio State second in school history in career rushing yards (3,768) and third in rushing touchdowns (44).

George won the NFL Rookie of the Year award in 1996, and was the Oilers/Titans' starting until 2003, never missing a start due to injury. He made the 4 times (1997-2000), and assisted the Titans to a championship appearance in , where they lost to the 23-16. George gained 391 combined rushing and receiving yards in the Titans' 3 playoff games that year, and went on to rush for 95 yards, catch 2 passes for 35 yards, and score 2 touchdowns in the Super Bowl.

Numerous sports writers have suggested that a heavy workload was the primary factor in George's decline. In five of his eight seasons with the Titans, George carried the ball over 330 times. In 2003, George rushed for a near career low 3.3 yards per carry. George's decline in production along with numerous toe and ankle injuries were contributing factors in Titan's owner, Bud Adams decision to release him after George would not agree to a pay cut. [http://www.profootballweekly.com/PFW/Features/Free+Agency/2004/arkush060104.htm]

George signed a one-year contract with the on , for $1.5 million plus incentives that could have earned him more than the $4.25 million he would have made under his contract with the Titans, who released him on in part due to considerations. He retired from the NFL before the 2005 season.

In 1998, George appeared as a guest star on as a football star named Leon Washington.

In 2006, Eddie helped a teen become Prom King at Westerville South High School in for an episode of the show "Made".

George served as a pre-game analyst for the 2007 on FOX, and is well known for handing out OSU hats and apparel to fellow analysts during the Buckeyes' 41–14 loss to the University of Florida. He could be seen cheering on the sidelines during most of the game.

Eddie and his wife Taj currently star in the TV One reality series "I Married A Baller".

George is married to , a member of the R&B group . He has two sons, Eriq Michael George, from his marriage to Tamara, and Jaire David George, from a previous relationship. On October 1, 2006, George was appointed spokesperson for Tennessee's GetFitTN program by Gov. . The initiative is aimed at the prevention of Type 2 diabetes and the promotion of healthier, more active lifestyles.

George's mother, Donna, had changed her schedule as a (at the request of Eddie's agent, Lamont Smith) to be in San Antonio for Eddie's signing of his first NFL contract on , . If she hadn't, she would have been aboard , which had crashed shortly after takeoff two days earlier. [ [http://www.texnews.com/sports/georgemom081096.html texnews sports ] ]

With partners, George has opened sports-theme restaurants in (Eddie George Sports Grille) across the from and in (Eddie George's Grille 27) near the Ohio State University campus. George is also a trained and licensed landscape architect, and a principal of The Edge Group, a firm of over 20 professionals. In 1995, George's Heisman Trophy was damaged when he put it through an X-ray machine at a New York airport. [http://sportsillustrated.cnn.com/2006/football/ncaa/12/12/smith.trophy.ap/index.html]

On Saturday, April 28, 2007, George ran the Country Music Half Marathon (ending just outside LP Field) in an unofficial time of 2:04:08. He wore race number 27 during the race, just as he wore number 27 during his college and NFL careers. George later stated that completing the race was tougher than playing in the NFL.

George is currently attending the Kellogg School of Management at Northwestern University, pursuing an MBA in the Executive MBA program.