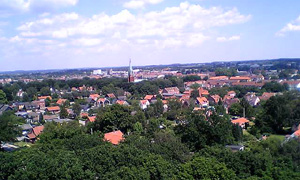 Today Eslöv largely serves as a of and .

Eslöv was a small village until the beginning of the age. In a station on the main line between and was opened. In the 1860's more railways were built and Eslöv became a junction with lines in six different directions. The population began to grow and in it had reached 1,240 and Eslöv got the status of a "" (market town). In 1911 it had 5,400 inhabitants and got (See "stad"). The population continued to grow and reached 7,000 in , 11,000 in and 15,000 in . The local government reform of made Eslöv the seat of , which today has more than 30,000 inhabitants.

Trade flourished around the new station and eventually it also attracted industrial establishments. Among the city's companies are (formerly Felix AB).

Sweden's tallest wooden house, "Lagerhuset", is located in the city. In 2007 a large scale renovation of the building will take place and it will later be possible to rent apartments in it. The building was first built as a storage magazine for during .

The medicine "" was invented in Eslöv. Several other big companies have also have their main offices in the town.