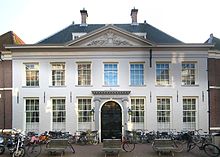 The West India House in Amsterdam, headquarters of the GWC from 1623 to 1647. 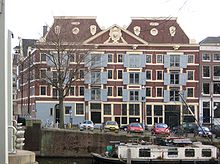 Warehouse of the GWC in Amsterdam.

Dutch West India Company (Dutch: Geoctroyeerde Westindische Compagnie or GWIC; English: Chartered West India Company) was a chartered company (known as the "GWC") of Dutch merchants. Among its founding fathers was Willem Usselincx (1567-1647?). On June 2, 1621, it was granted a charter for a trade monopoly in the West Indies (meaning the Caribbean) by the Republic of the Seven United Netherlands and given jurisdiction over the African slave trade, Brazil, the Caribbean, and North America. The area where the company could operate consisted of West Africa (between the Tropic of Cancer and the Cape of Good Hope) and the Americas, which included the Pacific Ocean and the eastern part of New Guinea. The intended purpose of the charter was to eliminate competition, particularly Spanish or Portuguese, between the various trading posts established by the merchants. The company became instrumental in the Dutch colonization of the Americas.

Recife or Mauritsstad - Capital of the Nieuw Holland.

The GWC was organized even though, they were Aldermen similarly to the Dutch East India Company (Dutch: Vereenigde Oost-Indische Compagnie, abbreviated as VOC), which had a trade monopoly for Asia (mainly present Indonesia) from 1664, except for the fact that the GWC was not allowed to conduct military operations without approval of the Dutch government. Like the VOC, the company had five offices, called chambers (kamers), in Amsterdam, Rotterdam, Hoorn, Middelburg and Groningen, of which the chambers in Amsterdam and Middelburg contributed most to the company. The board consisted of 19 members, known as the Heeren XIX (the Lords Nineteen).

The company was initially relatively successful; in the 1620s and 1630s, many trade posts or colonies were established. The New Netherland area, which included New Amsterdam, covered parts of present-day New York, Connecticut, Delaware, and New Jersey. Other settlements were established on the Netherlands Antilles, several other Caribbean islands, Suriname and Guyana. The largest success for the GWC in its history was the seizure of the Spanish silver fleet, which carried silver from Spanish colonies to Spain, by Piet Heyn in 1628; privateering was at first the most profitable activity. In 1630, the colony of New Holland (capital Mauritsstad, present-day Recife) was formed, taking over Portuguese possessions in Brazil. In Africa, posts were established on the Gold Coast (now Ghana) and briefly in Angola. In the Americas, fur (North America) and sugar (South America) were the most important trade goods, while African settlements traded slaves—mainly destined for the plantations on the Antilles and Suriname—gold, and ivory.

After the Fourth Anglo-Dutch War, it became apparent that the Dutch West India Company was no longer capable of defending its own colonies, as Sint Eustatius, Berbice, Essequibo, Demerara, and some forts on the Dutch Gold Coast were rapidly taken by them. In 1791, the company's stock was bought by the Dutch government, and on 1 January 1792, all territories previously held by the Dutch West India Company reverted to the rule of the States-General of the Dutch Republic.[1][2]