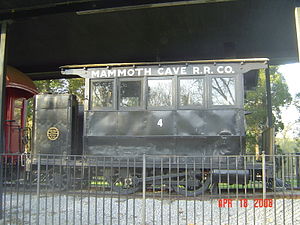 A steam dummy or dummy engine, in the United States of America and Canada, was a steam engine enclosed in a wooden box structure made to resemble a railroad passenger coach.

Steam dummies had some popularity in the first decades of railroading in the U.S., from the 1830s but passed from favor after the Civil War.

It was thought that the more familiar appearance of a coach presented by a steam dummy, as compared to a conventional engine, would be less likely to frighten horses when these trains had to operate in city streets. Later it was discovered that it was actually the noise and motion of the operating gear of a steam engine that frightened horses, rather than the unfamiliar outlines of a steam engine.

Many steam dummies were simply locomotives enclosed in coach's clothing, but some combined an actual railroad coach in the same body with the locomotive, creating an all-in-one vehicle that was a predecessor of later self-propelled rail cars, usually powered by electricity or petrol.