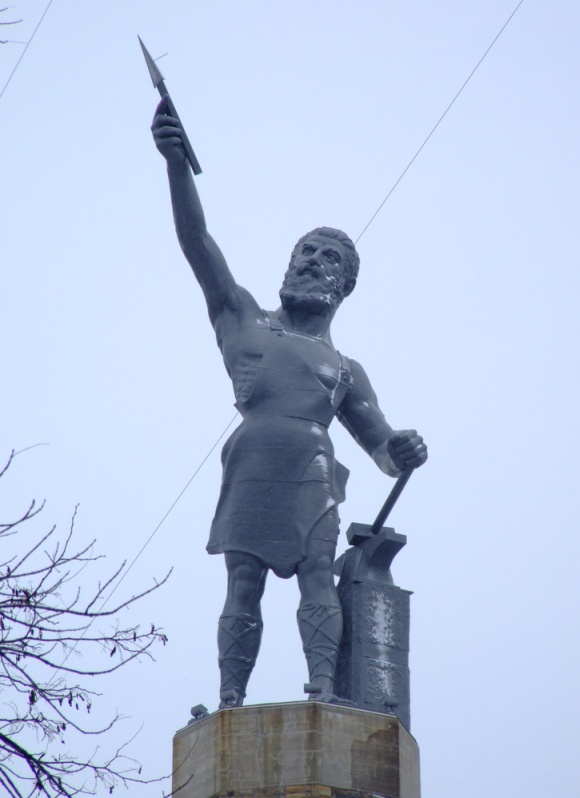 The Vulcan statue is the largest statue in the world, and it the symbol of city of , reflecting its roots in the iron and steel industry. The convert|56|ft|m|0|adj=on tall statue depicts the Roman god Vulcan, god of the fire and forge. It was created as Birmingham's entry for the (1904 World's Fair) in . It is the seventh-tallest free-standing statue in the United States. []

Commissioned by the Commercial Club of Birmingham, Italian-born sculptor began designing the monumental figure in 1903, using a convert|6|ft|cm|0|adj=on tall model to study the form. He next sculpted a clay master model in an abandoned church in , and this was then divided into sections and transported by to the Birmingham Steel and Iron Company for the preparation of casting molds for the iron.

The Vulcan statue consists of 29 cast-iron components with connecting flanges that are bolted together internally. The heaviest section is his whole head, which weighs convert|11000|lb|kg|0. Iron forgemen designed and executed the connection details for the statue, which originally had no internal framework and was self-supporting. The castings were made in Birmingham entirely from locally-produced iron.

Vulcan dramatically demonstrated the mineral and manufacturing riches of the Birmingham area at the 's "Mine and Metallurgy" exhibit, and it was awarded the "Grand Prize".

When the Exposition in St. Louis ended, the Vulcan statue was dismantled and returned to its home city of Birmingham, only to be left in pieces alongside the railroad tracks due to unpaid freight bills.

The Vulcan statue was eventually re-erected at the , but the statue's arms were installed incorrectly, and the god was without his , which had been lost on the way from St. Louis.

With nothing to hold in its hands, Vulcan soon became an advertising figure. Over the years, Vulcan held an ice cream cone, a bottle, and even pickles. In the late 1920s, the statue was disassembled for inspection. During this time, children would often play around the disassembled statue. It was painted a flesh color and was reassembled in the early 1930s.

It was not until 1936 that the statue found a suitable home, thanks to the , which partially funded a new park in the city at the top of Red Mountain. A convert|126|ft|m|1|adj=on pedestal was built of local , and Vulcan was hoisted into place. A new spear was fabricated to be held high in his right hand while his left hand held a hammer at his side. Vulcan was repainted in an aluminum like finish. The statue's naked have been source of humor for many years. A novelty song, "Moon Over Homewood," refers to the fact that the statue "moons" the neighboring suburb of .

A nine day festival commenced on , to dedicate Vulcan Park. Miss Evelyn Tully was crowned the Vulcan Queen. Guests of honor included the foundrymen who originally cast Vulcan. A crowd of 5,000 was present for the opening night of the festival.

To take full advantage of Vulcan's position overlooking Birmingham, the city's in 1946 made the statue into a symbol for . His spear was replaced by a neon torch that glowed green, except during the 24 hours following a fatal traffic accident, when it glowed red.

To celebrate Birmingham's centennial, the area around the statue was given a $1 million facelift in 1971. The original tower was clad in Alabama with an elevator and observation deck added. A covered walkway also connected a gift shop and snack bar. Vulcan was repainted a rust red a few years later. Vulcan was listed on the on , .

Unfortunately, the statue itself had, at some point, been filled up to the chest with and had begun to deteriorate seriously. By 1990, an engineering study found that the statue was in danger of collapse.

Vulcan was removed during October and November 1999 in preparations for a $14 million renovation process that saw the park and pedestal restored to its original 1938 appearance. The statue sat in Vulcan Park's parking lot until the fall of 2001, when it was shipped to Robinson Iron to be repaired. The statue itself was thoroughly inspected and repaired, with some parts, including the lost spear point, re-cast. The new and restored pieces were thoroughly coated with a durable paint system, including a light-gray finish coat dubbed "Vulcan Gray" by the specifier.

Meanwhile in 2002, the 1971 park additions were demolished, and scaffolding went up around Vulcan's tower. Workmen cleaned and repaired the original tower. Vulcan's head and right arm went on display at the while the tower was prepared.

Vulcan was re-erected on a steel armature atop his tower during June 2003, restored to its original appearance as intended by Moretti, slightly reoriented to the east. Television stations WVTM and WBRC both provided live s of the reinstallation.

Shortly after the statue was reinstalled, the scaffolding came down, and a new observation deck, providing panoramic views of the area, was installed. The museum at the base was rebuilt, though it now serves as a storage area. A new elevator was installed, but oriented so it would not be easily seen from downtown Birmingham. The original waterfalls were not rebuilt, though the stone walkways leading from the parking lot directly to Vulcan's tower were restored. The statue and park were officially reopened in 2004, celebrating Vulcan's 100th birthday. In 2004, Vulcan Park welcomed more than 100,000 visitors. The restoration project received a National Preservation Honor Award from the in 2006. [cite press release | title =National Trust Presents National Preservation Honor Award to Vulcan Park in Birmingham, Alabama | publisher =National Trust for Historic Preservation | date =2006-11-02 | url =http://www.nationaltrust.org/news/2006/20061102_npa_vulcan.html | accessdate =2006-11-06]

Vulcan Park is the 10-acre (4 ha) urban green space surrounding the statue. The park features a new visitor's center, called the Vulcan Center, with interactive exhibits and displays that give insight into the history and industrial growth of the Birmingham District as well as the story of the Vulcan statue. A replica of Vulcan's foot, cast in fiberglass in 1991, is displayed inside the museum, giving visitors a sense of the scale of the statue. The offices of the Vulcan Park Foundation, which manages the park for the city are also housed in the Vulcan Center, along with space for temporary exhibitions, receptions and conferences. In 2005 the city began providing free wireless internet access during park hours.

The city's entry in the , the was named for the statue, though some non-locals assumed incorrectly that the nickname was a reference to the race of Vulcans on the television show "". The same false assumption was made when George W. Bush’s foreign policy advisory team in the , led by Birmingham native nicknamed themselves in honour of the statue.