A covered bridge is a bridge with enclosed sides and a roof, often accommodating only a single lane of traffic. Most covered bridges are wooden; some newer ones are concrete or metal with glass sides. Mainly associated with the 19th century, covered bridges often serve as prominent local landmarks and have long attracted the attention of historic preservationists.

The enclosure acts as weather protection over the working part of the structure. For example, a bridge built entirely out of wood, without any protective coating, may last 10 to 15 years. Builders discovered that if the bridge's underpinnings were protected with a roof, the bridge could stand for 70 or even 80 years. Existing covered bridges have been renovated using concrete footings and steel trusses to hold additional weight and to replace the original support timbers. Some covered bridges, such as the ones in Newton Falls, Ohio and Elizabethton, Tennessee, also feature an integrated covered walkway.

Early bridges were often made of wood, especially where it was a plentiful resource. Wooden bridges tended to deteriorate rapidly from exposure to the elements, having a useful lifespan of only nine years. Covering them protected their structural members, thus extending their life to 80 years or more.

Most wooden covered bridges employ trusses as their key structural design element. A popular design was the Brown truss, known for its simplicity; but others were also used.

Given the ready availability of steel, concrete, and other modern construction materials, most modern covered bridges are built either for the convenience of the user, rather than to protect the structure itself, or as a statement of style or design.

Many of the oldest bridges were built as post-and-pile construction. This is commonly seen in stone construction, where columns (piles) are used to support spans (posts) covering open spaces. The Kapellbrücke in Lucerne is an example. A modern example is the Covered Bridge, Lovech, which uses stone piers and steel beams. Many older bridges were built using an arch. The Ponte Coperto in Italy and the Ponte Vecchio in Florence, Italy, are examples. As bridge needs increased in North America, designs turned to available material, wood. In order to cover the spans needed, truss design was extended and improved. Eleven major trusses were used during the period of wood construction.

Standard Truss Types The earliest covered bridges used the simple King post and Queen post design. These had been traditional truss types for building construction. Older bridges along the east coast are often dominated by King and Queen post designs. Beginning around 1820, new designs were being developed. 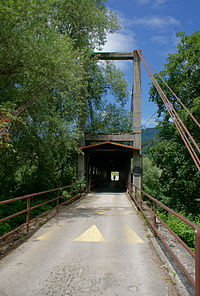 Bridge over Sava in Jevnica, Slovenia. 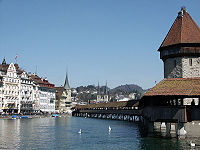 The Western tradition of covered bridges originated in Europe.

Famous stone covered bridges include the Rialto Bridge in Venice, Italy which for long was one of only three over the Grand Canal and a popular tourist attraction.

The Bridges of Sighs in Venice, Cambridge and Oxford are also covered bridges. 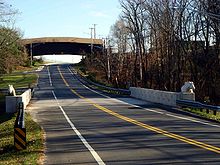 A covered horse bridge at the race track in Bowie, MD

Such bridges are found in rural areas throughout the United States and Canada, but are often threatened by arsonists, vandals, and flooding. In the United States, Pennsylvania has more covered bridges (over 200) than any other state, many of which can be seen in Bedford, Somerset, Washington, Chester and Lancaster Counties. The U.S. states of Vermont and New Hampshire have more covered bridges per square mile than any other place in the world. Oregon has the largest number of historical covered bridges in the western United States.[10] They are also common in places such as Elizabethton, Tennessee; Lane County, Oregon; Madison County, Iowa; Parke County, Indiana; and Blount County, Alabama. Parts of California, Indiana, Ohio, Michigan, Kentucky, Maryland, Minnesota, Virginia, West Virginia, Wisconsin, and the New England states have surviving covered bridges.

There are various structural designs used for covered bridges, such as the Burr Truss.

Opened on July 4, 1901, the 1,282-foot (391 m) Hartland Bridge, crossing the Saint John River at Hartland, New Brunswick, is the longest covered bridge in the world. It is a national historic site. In 1900, New Brunswick had an estimated 400 covered bridges, and Quebec more than 1,000, while Ontario had only five. As of 2006[update], there were 94 covered bridges still standing in Quebec,[11] 65 in New Brunswick, and one in Ontario, the West Montrose Covered Bridge.[12]

A much longer covered bridge (5,960 feet / 1,820 metres) between Columbia and Wrightsville, Pennsylvania once spanned the mile-wide Susquehanna River, making it the longest and most versatile covered bridge in the world during its existence. It featured railroad tracks, a towpath for canal boats crossing the river between two canals on either bank, and a carriage/wagon/pedestrian road. The popular toll bridge was burned June 28, 1863, by Union militia during the American Civil War to prevent its usage by the Confederate Army of Northern Virginia during the Gettysburg Campaign. A replacement wooden covered bridge was destroyed by a windstorm a few years later. It was rebuilt as an open-air steel bridge.

Currently, the longest existing covered bridge in the United States is the Smolen-Gulf Bridge (613 feet / 187 metres) spanning the Ashtabula River near Ashtabula, Ohio, which was completed in 2008. Prior to its completion, the Cornish-Windsor Covered Bridge (449 feet / 137 metres) connecting Cornish, New Hampshire and Windsor, Vermont built in 1866, was the longest. The shortest is the West Liberty Covered Bridge (18 feet / 5.5 metres) in Geneva, Ohio.

The town of Blenheim, New York had the longest single-span covered bridge in the world (232 feet / 71 metres). Built in 1855, it was later destroyed on August 29th, 2011 due to flooding from Hurricane Irene. It was one of only six "double-barreled" covered bridges in North America; that is, a bridge with two traffic lanes separated by a supporting truss. There are other double-barreled bridges in Vermont (2), Ohio (1), Indiana (1), and West Virginia (1).

Covered bridges are generally considered old-fashioned and appeal to tourists. 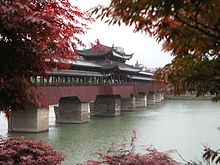 Taishun County, in southern Zhejiang province near the border of Fujian, has more than 900 covered bridges, many of them hundreds of years old, as well as a covered bridge museum.[14][15] There are also a number in nearby Qingyuan County, as well as in Shouning County, in northern Fujian province. The Xijin Bridge in Zhejiang is one of the largest.

There is a well known covered bridge in Hoi An, Vietnam (in the Quang Nam Province of Vietnam's South Central Coast), called Chùa Cầu—the Japanese Bridge.

Modern covered bridges are usually for pedestrians, for example to walk from one part of an office building to another part, to cross railway tracks at a station, or in a shopping center on an elevated level, crossing a road. See also skyway.

Glass-walled covered bridges are rather common at American airports, and some of those bridges can be found at John F. Kennedy Airport in New York City.

Also, some highway bridges, such as the George Washington Bridge, have lower decks for additional capacity, and those decks, while generally open on the sides, can be enclosed with plastic from time to time during construction, thus rendering the lower decks as partially covered bridges.

The Bloor-Danforth subway in Toronto, Ontario, crosses the Rosedale Ravine on a covered bridge made of concrete.[16] 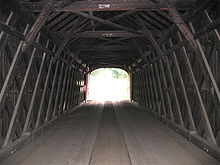 North American covered bridges received much recognition as a result of the success of the novel, The Bridges of Madison County written by Robert James Waller and made into a Hollywood motion picture starring Meryl Streep and Clint Eastwood. The Roseman covered bridge from 1883 in Iowa became famous when it was featured in both the novel and the film.

This transport-related list is incomplete; you can help by expanding it.