The News & Observer is the regional daily newspaper of the Research Triangle area of the U.S. State of North Carolina. The N&O, as it is popularly called, is based in Raleigh and also covers Durham, Cary, and Chapel Hill. The paper also has substantial readership in most of the state east of Winston-Salem. It is the state's second-largest newspaper, after The Charlotte Observer. The paper has won three Pulitzer Prizes, most recently in 1996 for a computer-assisted investigation of the North Carolina hog industry.[1]

The newspaper became an online service provider and offered one of the first World Wide Web news sites with Nando.net in 1994. In 1995, the paper was bought by McClatchy Co. of Sacramento, California.

The News & Observer traces its roots to The Sentinel, which was founded in 1865. That paper was eventually absorbed by The Observer, which in turn merged with The News in 1880 to form The News & Observer. In 1894, Josephus Daniels bought The News & Observer at a distressed property auction with the purpose of using the paper to support the state Democratic Party; 70 prominent North Carolina Democrats donated money for the auction. Daniels became the editor. His first edition was released on August 12, 1894, with a circulation of 1,800 (out of 10,000 in Raleigh) at $7 ($177 today) a year.[3]

Daniels was editor of the paper until his death in 1948, and made many prominent changes. He installed the first linotype machines, changed the typography, and took advertisements off the front page. He wanted to change the name to The North Carolinian, but was convinced otherwise because The News & Observer already had name recognition with advertisers and readers. During this time, though, the paper was dubbed "The Old Reliable" by salesman Wiley Rogers. 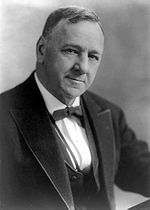 Josephus Daniels, the principal shaper of The News & Observer

Daniels was an unabashed racist and used every resource of his newspaper to remove African American officials from office. In editorials, his paper advocated the use of violence and intimidation to control black voters. A group of men called the "red shirts" appeared at political rallies and meetings, often with weapons to get their message across to black voters. Daniels was quoted as saying "if you have never seen three hundred red-shirted men towards sunset with the sky red and the red shirts seeming to blend with the sky, you cannot conceive the impression it makes."[4]

In 1898, The News & Observer and Daniels ran a racist campaign to reclaim the state legislature from an alliance of the Republican and Populist political parties that had taken control of the state legislature in 1894. This 1898 campaign helped to bring about the disenfranchisement of thousands of black voters. The campaign, organized by Democratic Party state leaders (including Daniels and other white supremacists), resulted in the deaths of up to 100 African Americans and the burning of a newspaper owned by Alex Manly, an African American, in the Wilmington race riots.[5] That bloody day led to Republicans (both black and white) who held public office being forced to resign at gunpoint. The event remains the only known violent overthrow of a city government in American history. A recent study by the Wilmington Race Riot Commission showed that "the Wilmington Race riot was not a spontaneous event, but was directed by white businessmen and Democratic leaders",[6] one of whom was Josephus Daniels.

According to Pope House Museum Foundation in Raleigh, "As many of the whites the Democrats wanted to reach were illiterate, Daniels hired a professional cartoonist, Norman Jennett, who drew vile and false images of supposedly incompetent African American politicians who lusted after young white women."[7]

In 1948, Daniels died and was replaced by his four sons. His son Jonathan edited the paper, and his son Frank was the president and publisher. In the 1950s, The News & Observer consolidated its position, buying The Raleigh Times and moving into a new headquarters at 215 S. McDowell St. in Raleigh, where it remains.

In 1968, the Daniels family hired Claude Sitton, who had been a correspondent for The New York Times and later an editor there. Serving as the editorial director of the paper, he promoted The News & Observer as a government watchdog and moved the news of the paper away from the personal and partisan stances it had taken under Josephus Daniels. However, its editorials were still often aligned with the Democratic Party. Triangle conservatives often call the paper "the Nuisance and Disturber." A year later, the Mini Page children's supplement was created and published. Today, it is one of the nation's most widely used children's newspaper supplements.

In 1971, Sitton became the editor and the paper began buying and publishing smaller local newspapers, starting with The Island Packet in Hilton Head, South Carolina, and The Cary News in Cary, North Carolina.

On March 16, 1980, a welder's torch started a fire and burned through all the newsprint threaded through the press, injuring three and causing millions in damage.

Throughout the early 1990s, The News & Observer divested itself of various local newspapers in South Carolina and the North Carolina mountains, and by September 1993, Sunday sales of The News & Observer reached 200,000 for every week. However, the newspaper still owns The Cary News, Chapel Hill News, and the Smithfield Herald among other newspapers. In 1994, the paper created Nando.net, becoming an Internet service provider and began publishing the NandO Times online newspaper.

On May 17, 1995, The News & Observer Publishing Company was sold to McClatchy Newspapers for $373 million, ending 101 years of Daniels family ownership. In the mid-1990s, Flexo machines were installed, allowing the paper to print 32 pages in color, at the time the largest color capacity of any newspaper in the United States.

In 1999, The News & Observer was named one of the nation's 100 best newspapers by the Columbia Journalism Review, and one of the 17 best-designed newspapers in the world by the Society for News Design.

With McClatchy's acquisition of most of Knight Ridder's properties in 2006, the state's two largest papers—the N&O and the Charlotte Observer—are now under common ownership.

In September 2008, the News and Observer offered buyouts to all 320 newsroom employees, approximately 40% of its staff, in an effort to cut expenses. Previously the company had shut down its Durham news bureau and in a separate event laid off 70 employees.[8] Layoffs and buyouts have continued since then. [2]

The newspaper's presses appeared in the 1994 movie The Hudsucker Proxy. The building served as the Terre Haute, Indiana police station in Arthur Newman, Golf Pro, in scenes filmed November 9, 2011.[9]