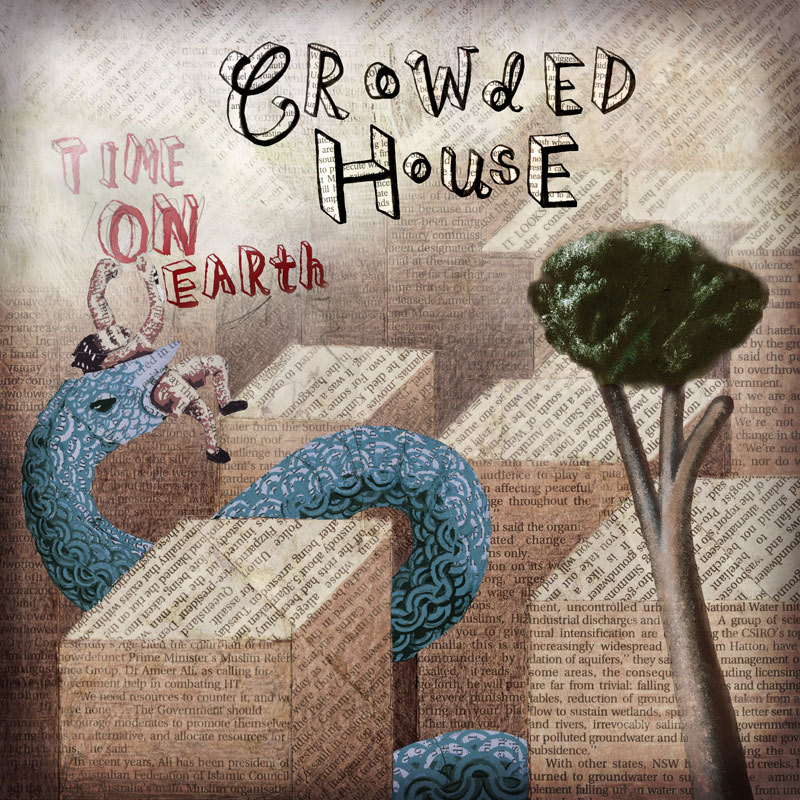 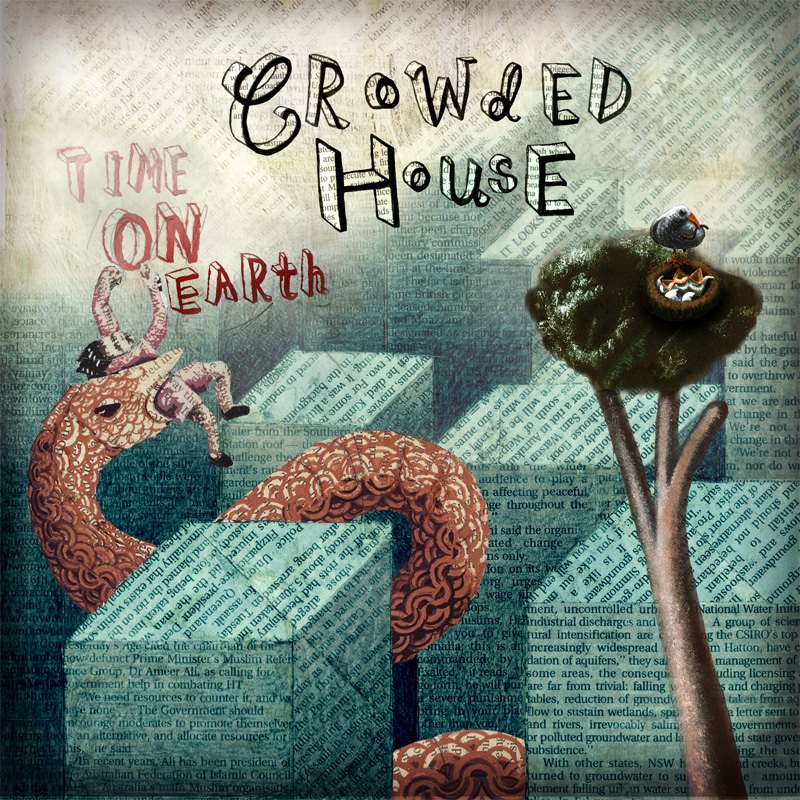 "Time on Earth" is the fifth studio album by the pop-rock band . Tracks have been produced by both and and the album was released on 30 June 2007 in Australia, 2 July in the United Kingdom and 10 July in North America. "Time on Earth" is the band's first studio album since 1993, and marks the reunion of the band eleven years after they disbanded and features new drummer in place of the original drummer, , who took his own life in 2005.

As the first studio album from the group in fourteen years, "Time on Earth" has been subject to much speculation. Upon its release the album garnered positive critical reception and reached Platinum status within weeks of release in Australia, [ [http://ten.com.au/ten/aria-year-in-review.html 2007 Aria Awards: A Year in Review - Seriously TEN] , "August 2007", . Retrieved .] and Gold status in its second week of release in New Zealand.

The album was originally intended to be frontman 's third solo release. In the wake of Paul Hester's death, as well as preparations for the release of the live album "", the band members were drawn together and their friendship was reinvigorated. In 2006, Neil Finn invited bassist to participate in the recording of his new album and subsequent tour. In the initial phase, various session musicians filled parts, such as studio musician on drums and British soul singer provided backup vocals for the song "Transit Lounge." After recording a complete album with Ethan Johns in the producer and drummer's seat and Seymour contributing substantially throughout the process, Finn decided Crowded House would reform and that "Time on Earth" would be the band's fifth studio album. The title "Time on Earth" takes its name from a song of the same name that was not included in the album. [Howlspace, [http://www.whiteroom.com.au/howlspace/en/crowdedhouse/crowdedhouse.htm Crowded House] , retrieved 31 August 2007.]

With new drummer and returning multi-instrumentalist now involved as members of the official lineup, the band returned to the studio to record four additional tracks with producer Steve Lillywhite. Hart and Sherrod also contributed retroactively to some of the Ethan Johns-produced material. In its final form, the album features tracks mixed by Johns, Lillywhite and . Guitarist was involved in the recording of "Even a Child", which he co-wrote, and "Don't Stop Now". [ [http://www.nme.com/news/crowded-house/27923 Smiths guitarist writes Crowded House track] - "". Accessed 8 November 2007]

Due to the transient nature of the album, gradually adapting from a solo venture into a band effort, the recording process used was somewhat unorthodox in that it encompassed various session musicians for the majority, while the "central lineup" of Finn, Seymour, Hart and Sherrod only performed on four tracks, which includes "", the album's lead single, and "", the following single. Before this point, most of the album was produced by , however from enlisting Sherrod and calling upon Hart to return, the prolific producer took over. [Hepworth, David; [http://www.crowdedhouse.com/s_about/biography.php Crowded House - Time on Earth] , "Biography", CrowdedHouse.com. Retrieved .]

To bring their music to the public before the album's release, the group played together a few times before the release. On 17 March 2007 the band played a 2 ½ hour set streamed live to the internet from veteran musician 's studio () in England. In this performance, there were eight new songs featured, beginning with Finn's co-written piece with the "Silent House" and also included "Pour Le Monde" ("For the world"), "Transit Lounge", "" and "".

To also pre-empt the album's release, a single was released. The song "" was selected, as it featured the new lineup of the band. The single received moderate success in the charts. The follow-up single, "", released in September 2007, was not as successful as "Don't Stop Now".

The album had a staggered release internationally across a fortnight, beginning in Australia, while the final location of its release was with the United States. Following the Australian release, the group performed at in Australia, performing many of the album's songs, and also on various television programs, along with many interviews, such as on "Rove" and "" with . A special live version of Crowded House performing "Silent House" was made available for Australian and UK purchasers of the album by inserting the disc into their computer and downloading the song from the internet. The song features the advertised album lineup, including new drummer and returning member of Crowded House , neither of whom were on the studio version. [Neil Finn, [http://www.radionz.co.nz/audio/national/nrmtalk/neil_finn_interview Radio New Zealand] interview with Neil Finn, recorded 19 May 2007. Retrieved 21 August 2007.]

The album has been very well received by critics and the public, with many critics praising the album as "a worthy successor to Crowded House's existing catalog". [Horowitz, Hal; Amazon Editor, [http://www.amazon.com/dp/B000Q9OD7G Amazon.com: Time on Earth] . Retrieved 24 July 2007.] Some reviews have indicated that the album has its flaws, though these are easily dismissed due to the album's other qualities " [Time on Earth] " is not perfect. Like Woodface, at nearly an hour long and weighed down by a few too many mid-tempo tracks, Time on Earth gets a little out of the band's control. "Transit Lounge" features a distracting turn from singer Beth Rowley, while the nostalgic Old Country tribute "English Trees" probably would have worked better with brother Tim... Finn's forte has always been as a songwriter first and foremost, not a pretentious album-length crafter of grand cohesive statements or conveyor of didactic meaning. He writes deeply personal pop songs with oblique lyrics and deceptively tricky melodies, but no matter who (or what) Finn is mourning, he leaves it up to the listener to make it all fit." Some reviewers indicate that in "Text, context and subtext, Hester's passing seems to color every line", indicating the album clearly articulates Finn's grief for Hester's death in 2005.

As he did for the first four Crowded House albums, Nick Seymour, also an artist, created the for "Time on Earth". The group's name "Crowded House" appears with jumbled case, some lower and some upper case, appearing as "cRoWdED HOusE". Similarly, the album title is also in a partial jumble with all but the last two letters in upper case, appearing as "TIME ON EARth."

In November 2007, a special edition of "Time on Earth" was released featuring a colour altered cover. The cover's main background area, which was previously a sandy-wheat colour, was converted into an aqua-teal colour, while the tree in the image had a bird in a nest added to it.

According to Neil Finn, "It ("Time on Earth") doesn't sound like any one particular Crowded House album, but it has elements of Crowded House... in as much as Nick and I make a sound together when we play and always did. I think there's a lot of heart and spirit in the album which is connected with the loss of our dear friend Paul but also an attempt to try and make sense of it and move forward. And as such, it seemed the most obvious and best way to do that was to be playing music again with each other, Nick and I. I want to be in a band and what other band could it be." [ [http://www.farewelltotheworld.com EMI site] - video interview - published February 2007, accessed 8 November 2007] Crowded House's leader, Neil Finn has indicated that, as the album began life as a solo project, its sound is generally different to Crowded House, though similar in parts, indicating that no one album by the group sounds like this one. As the album is dedicated to Hester and attends to his death, much of the album has a mournful tone, however this has been received well by critics, with some indicating that "fortunately, Finn is a master at expressing ambiguity, (both) lyrically and musically". [Lewis, Randy; [http://www.calendarlive.com/music/cl-ca-rack8jul08,0,3140779.story "Crowded House reunites in grief -- and joy" - RECORD RACK - Los Angeles Times] . Released 8 July 2007. Retrieved 25 July 2007.] Finn has said of the song "People Are Like Suns", that "Part of it is the idea that people burn brightly and then they fade out. Also, when I wrote it, I was reading 's novel "Saturday", which begins with a man on his balcony watching his plane go down, so the first lines borrow something from that image."

The song "Pour le Monde" (which means "For the World" in the ) was inspired when Finn was in Paris and observed a demonstration march protesting against the , with the chant "Pour le monde pas pour la guerre", which translates to "For the world, not for the war" (which is then sung in English directly after the French on the song).

Lyrically, Andy Strickland of asserts that the album's song "English Trees" shows Finn's "brilliant weaving of a tale of loss and yearning marks him out as up there with the very best songwriters working today" and of the album's musical structure as a whole, comments that it is a "collection of songs that reflect Finn's usual palette of singalong pop ("She Called Up"), achingly fine ballads ("Pour Le Monde"), and darker, more ambient sounds ("A Sigh")".

"Time on Earth" entered the Australian on 8 July at #2, just behind 's "", however in its second week, it rose to the #1 position, swapping with "Call Me Irresponsible" which then moved to #2. It entered the albums chart in New Zealand on 9 July 2007 also at #2, though slipped to #3 in its second week, instead of rising as it did in Australia. Crowded House's place of origin is held in contention due to the band being led by of New Zealand, however the band has always resided in, and was formed in, Australia. Due to this constant confusion, both ARIA and RIANZ consider the group to be native to their respective countries, as they're indicated as "local artists" in the album listings, on ARIA as a "red spot" and on RIANZ with the item highlighted in green. [ [http://rianz.org.nz/rianz/chart.asp RIANZ] . Retrieved 15 July 2007.] [ [http://ariacharts.com.au/pages/charts_display.asp?chart=1A50 ARIA] . Retrieved 15 July 2007.] On the U.S. , the album debuted at number 46, with about 16,000 copies sold in its first week. [Hasty, Katie [http://www.billboard.com/bbcom/news/article_display.jsp?vnu_content_id=1003613204 "T.I. Holds Off Pumpkins, Interpol To Remain No. 1"] , Billboard.com, accessed 18 July 2007.] The album entered the charts in the United Kingdom at #3 with sales of over 27,000, being Crowded House's most successful studio album on the UK charts, only being superseded by "" which achieved a #1 position and sold over a million copies. It also entered the #38, its Canadian peak position.

In April 2007, the band's website went live and included a confirmation of the track listing of "Time on Earth". Notably, the album has 14 tracks, only the second studio album by Crowded House to have as many, the previous being "". The album features the guitar work of , guitarist and songwriter of , on "Even a Child" and lead single ";" Marr co-wrote the former song with Finn. The album also includes the song "Silent House", which Finn co-wrote with the (which also appeared on their 2006 -winning album ""). With the Australian and UK release, the CD unlocks an online exclusive download of a live version of the song "Silent House". Early releases of the album in the UK included an additional DVD. Following touring, on 3 November 2007, a special edition was released in Australia featuring a colour-altered cover and an extra CD featuring eleven songs from the 8 September 2007 performance at , , Canada, for the North American leg of the "Time on Earth" tour. [cite web|url=http://www.sanity.com.au/product/product.asp?sku=2101697|title=Crowded House / Time On Earth: Tour Edition (CD)|work=Track Listing|publisher=Sanity|accessdate=2007-11-04
cite web|url=http://www.crowdedhouse.com/s_news/news.php?item=1707900|title=CROWDED HOUSE RELEASE AUSTRALIAN TOUR EDITION CD|publisher=CrowdedHouse.com|accessdate=2007-11-04
cite web|url=http://www.crowdedhouse.com/s_tour/tourArchive.php|title=Back to Tour....|work=Sat 08 Sep 2007 Winnipeg, MB, Canada - Winnipeg Concert Hall|accessdate=2007-11-04]

The tracks "Lost Island" and "Stare Me Out" are available on the vinyl version of this album. They are also available as b-sides to "Don't Stop Now," and as bonus tracks via digital music providers.