Middle America is a region in the mid-latitudes of the Americas. In southern North America, it usually comprises Mexico, the nations of Central America, and the West Indies. The scope of the term may vary. Sometimes, Colombia and Venezuela are also included in Middle America; the West Indies are occasionally excluded from the region; and the Guianas are infrequently included.[2][3][4]

Physiographically, Middle America marks the territorial transition between the rest of North America and South America, connecting yet separating the two.[5] On the west, the Middle American mainland comprises the tapering, isthmian tract of the American landmass between the southern Rocky Mountains in the southern United States and the northern tip of the Andes in Colombia,[6] separating the Pacific Ocean on the west and the Atlantic Ocean (viz. the Gulf of Mexico and Caribbean Sea) on the east, while the Greater and Lesser Antilles form an island arc in the east.[5] The region developed sub-aerially southward from North America as a complex volcanic arc-trench system during the Early Cretaceous period, eventually forming the land bridge during the Pliocene epoch when its southern end (at Panama) collided with South America through tectonic action.[7] 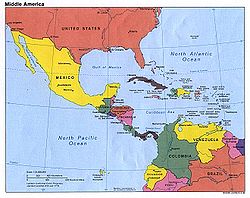 Occasionally, the term Middle America is used synonymously with Central America[4] (compare with Middle Africa and Central Africa). In English, the term is uncommonly used as a synonym of the term Mesoamerica (or Meso-America),[6][8] which generally refers to an ancient culture region situated in Middle America extending approximately from central Mexico to northern Costa Rica.[9] In addition, some residents of the region (e.g., Costa Ricans and Nicaraguans) may be referred to as Meso-Americans or Central Americans but not, however, as Middle Americans, which refers to a particular constituency in the United States.[10]