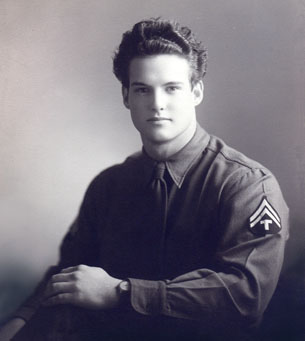 Born in , Steve Reeves moved to at the age of 10 with his mother Goldie, after his father Lester Dell Reeves died in a farming accident. Reeves developed an interest in while in high school and trained at Ed Yarick's gym in Oakland. By the time he was 17 he had developed a Herculean build, long before the rise in general interest in bodybuilding. After graduating from high school, he entered the Army during the latter part of , and served in the Pacific.

By his own account, his best cold (unpumped) measurements at the peak of his bodybuilding activity were:

Reeves was known for his "V-taper" and for the great width of his shoulders, which Armand Tanny once measured at 23 1/2" using outside . Fortunate to possess a very symmetrical and aesthetically pleasing body structure, further perfected by training, Reeve's physique has been admired ever since his prime.

"By [the 1940s] the distinction between lifting weights purely for strength and training with weights to shape and proportion the body had been clearly made. ... However, bodybuilding still remained an obscure sport. No champion was known to the general public--that is, until Steve Reeves came along. Reeves was the right man in the right place at the right time. He was handsome, personable, and had a magnificent physique. Survivors from the era recall how crowds used to follow Reeves when he walked along the beach, and how people who knew nothing about him would simply stop and stare, awestruck."

After his military service, Reeves decided to try his hand at acting, having been told endlessly that he had the rugged good looks of a star. After some intensive actor training, he came to the attention of film director , who considered him for the part of in "Samson and Delilah" (1949). After a dispute over his physique in which De Mille and the studio wanted Reeves to lose 15 pounds of muscle, the part finally went to .

In 1954 he had a co-starring role in his first major motion picture, the musical "Athena" playing 's boyfriend. The same year Reeves had a small role as a cop in the film "Jail Bait". This is one of the few opportunities to hear Reeves' voice as most of his later films were dubbed. Reeves' appearance in "Athena" prompted Italian director 's daughter to suggest him for the role of in her father's upcoming movie. In 1957, Reeves went to and played the title character in Francisci's "Hercules", which was released in Italy in February 1958 and in the U.S. in July 1959. The film's claimed credit for suggesting that Reeves grow a for the role. Following the U.S. release, the film was an enormous hit and created a new sub-genre of the film (also known as the film): the 'Hercules' or 'strong man' movie. The film is now in and can be downloaded from the .

From 1959 through 1964, Reeves went on to appear in a string of sword and sandal movies, and although he is best known for his portrayal of the Greek hero , he played the character only twice - in the 1958 film "Hercules" and the sequel "" (released in the U.S. in 1960). He played a number of other characters on screen, including Sir 's Glaucus of ; (also called Emiliano); hero ; , the legendary founder of (opposite as his twin brother ); the famous and war-time messenger of the Battle of , (""); pirate and self-proclaimed governor of Jamaica Captain ; and Karim, the Thief of . Twice he played of and twice he played 's Malaysian hero, .

Paramount considered Reeves for the title role of their film version of the "Li'l Abner" in 1958, but the part eventually went to Peter Palmer. After the success of "Hercules", Reeves turned down a number of parts that subsequently made the careers of other actors. He was asked to star as in "Dr. No" (1962), which he turned down. He also declined the role that finally went to in "" (1964).

During the filming of "", Reeves dislocated his shoulder when his crashed into a tree. Reeves pulled the joint back into its socket by himself and chose to continue filming and performing his own stunts. Swimming in a subsequent underwater escape scene he reinjured his shoulder. The injury would be aggravated by his stunt work in each successive film, ultimately leading him to retire early.

In 1968 Reeves appeared in his final film, a which he also co-wrote, titled "", fulfilling his wish to make a Western before he retired. had considered him for the title role of "" but delays in filming had the part eventually go to . At the peak of his career, he was the highest-paid actor in . His last screen appearance was in 2000 when he appeared as himself in the made-for-television ": Arnold Schwarzenegger - Flex Appeal".

Later in his life, Reeves promoted drug-free bodybuilding and bred horses. The last two decades of his life were spent in Valley Center (Escondido), California. He bought a ranch with his savings and lived there with his second wife Aline until her death in 1989. On , Reeves died from complications of .