Lab-on-a-chip
This article is about the technology. For the journal, see Lab on a Chip (journal). 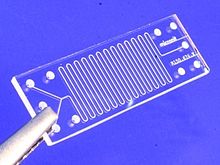 Lab-on-a-chip made of glass

A lab-on-a-chip (LOC) is a device that integrates one or several laboratory functions on a single chip of only millimeters to a few square centimeters in size. LOCs deal with the handling of extremely small fluid volumes down to less than pico liters. Lab-on-a-chip devices are a subset of MEMS devices and often indicated by "Micro Total Analysis Systems" (µTAS) as well. Microfluidics is a broader term that describes also mechanical flow control devices like pumps and valves or sensors like flowmeters and viscometers. However, strictly regarded "Lab-on-a-Chip" indicates generally the scaling of single or multiple lab processes down to chip-format, whereas "µTAS" is dedicated to the integration of the total sequence of lab processes to perform chemical analysis. The term "Lab-on-a-Chip" was introduced later on when it turned out that µTAS technologies were more widely applicable than only for analysis purposes.

After the invention of microtechnology (~1954) for realizing integrated semiconductor structures for microelectronic chips, these lithography-based technologies were soon applied in pressure sensor manufacturing (1966) as well. Due to further development of these usually CMOS-compatibility limited processes, a tool box became available to create micrometre or sub-micrometre sized mechanical structures in silicon wafers as well: the Micro Electro Mechanical Systems (MEMS) era (also indicated with Micro System Technology - MST) had started.

Next to pressure sensors, airbag sensors and other mechanically movable structures, fluid handling devices were developed. Examples are: channels (capillary connections), mixers, valves, pumps and dosing devices. The first LOC analysis system was a gas chromatograph, developed in 1975 by S.C. Terry - Stanford University.[1] However, only at the end of the 1980s, and beginning of the 1990s, the LOC research started to seriously grow as a few research groups in Europe developed micropumps, flowsensors and the concepts for integrated fluid treatments for analysis systems.[2] These µTAS concepts demonstrated that integration of pre-treatment steps, usually done at lab-scale, could extend the simple sensor functionality towards a complete laboratory analysis, including e.g. additional cleaning and separation steps.

A big boost in research and commercial interest came in the mid 1990’s, when µTAS technologies turned out to provide interesting tooling for genomics applications, like capillary electrophoresis and DNA microarrays. A big boost in research support also came from the military, especially from DARPA (Defense Advanced Research Projects Agency), for their interest in portable bio/chemical warfare agent detection systems. The added value was not only limited to integration of lab processes for analysis but also the characteristic possibilities of individual components and the application to other, non-analysis, lab processes. Hence the term "Lab-on-a-Chip" was introduced.

Although the application of LOCs is still novel and modest, a growing interest of companies and applied research groups is observed in different fields such as analysis (e.g. chemical analysis, environmental monitoring, medical diagnostics and cellomics) but also in synthetic chemistry (e.g. rapid screening and microreactors for pharmaceutics). Besides further application developments, research in LOC systems is expected to extend towards downscaling of fluid handling structures as well, by using nanotechnology. Sub-micrometre and nano-sized channels, DNA labyrinths, single cell detection and analysis, and nano-sensors, might become feasible, allowing new ways of interaction with biological species and large molecules. Many books have been written that cover various aspects of these devices, including the fluid transport,[3][4][5] system properties,[6] and bioanalytical applications.[7][8]

The basis for most LOC fabrication processes is photolithography. Initially most processes were in silicon, as these well-developed technologies were directly derived from semiconductor fabrication. Because of demands for e.g. specific optical characteristics, bio- or chemical compatibility, lower production costs and faster prototyping, new processes have been developed such as glass, ceramics and metal etching, deposition and bonding, PDMS processing (e.g., soft lithography), thick-film- and stereolithography as well as fast replication methods via electroplating, injection molding and embossing. Furthermore the LOC field more and more exceeds the borders between lithography-based microsystem technology, nano technology and precision engineering.

LOCs may provide advantages, which are specific to their application. Typical advantages are:

Some of the disadvantages of LOCs are:

Lab-on-a-chip technology may soon become an important part of efforts to improve global health,[10] particularly through the development of point-of-care testing devices. In countries with few healthcare resources, infectious diseases that would be treatable in a developed nation are often deadly. In some cases, poor healthcare clinics have the drugs to treat a certain illness but lack the diagnostic tools to identify patients who should receive the drugs. Many researchers believe that LOC technology may be the key to powerful new diagnostic instruments. The goal of these researchers is to create microfluidic chips that will allow healthcare providers in poorly equipped clinics to perform diagnostic tests such as immunoassays and nucleic acid assays with no laboratory support.

For the chips to be used in areas with limited resources, many challenges must be overcome. In developed nations, the most highly valued traits for diagnostic tools include speed, sensitivity, and specificity; but in countries where the healthcare infrastructure is less well developed, attributes such ease of use and shelf life must also be considered. The reagents that come with the chip, for example, must be designed so that they remain effective for months even if the chip is not kept in a climate-controlled environment. Chip designers must also keep cost, scalability, and recyclability in mind as they choose what materials and fabrication techniques to use.

One active area of LOC research involves ways to diagnose and manage HIV infections. Around 40 million people are infected with HIV in the world today, yet only 1.3 million of these people receive anti-retroviral treatment. Around 90% of people with HIV have never been tested for the disease. Measuring the number of CD4+ T lymphocytes in a person’s blood is an accurate way to determine if a person has HIV and to track the progress of an HIV infection. At the moment, flow cytometry is the gold standard for obtaining CD4 counts, but flow cytometry is a complicated technique that is not available in most developing areas because it requires trained technicians and expensive equipment. But recently Professor Aydogan Ozcan has developed a cytometer for just $5[Aydogan Ozcan 1].