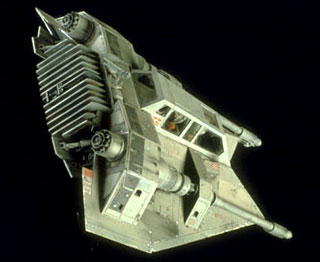 A snowspeeder is a Rebel Alliance vehicle featured in "" (1980) and several books, comics, and video games in the "". Snowspeeder models and replicas have been merchandised by several companies.

During production of "The Empire Strikes Back", designer conceived a ship that combined the body of an and the cockpit of the .

The models were built in three different scales by Steve Gawley, Charlie Bailey, and Mike Fulmer of ILM, with the smallest (20 inches) used for motion control photography, and the largest (2½ feet) for hero and pyrotechnic shots.

In "The Empire Strikes Back", , led by (), pilot snowspeeders against Imperial walkers during the .

The snowspeeders used on Hoth are modified Incom T-47 airspeeders initially used for civilians; they are modified to survive the "hostile environment of the ice planet Hoth". [cite book|year=2000|author=Slavicsek, Bill|title=A Guide to the Star Wars Universe|publisher=Del Ray and Lucas Books|isbn=0-345-42066-7|pages=494] Expanded Universe material states that the Y-Wing cockpit and other features were donated to the airspeeders. The two-man craft has an advanced power system and repulsorlift to compensate for additional armaments and armor, affording them a top speed of 1,000 and combat speed of 600 km/h.