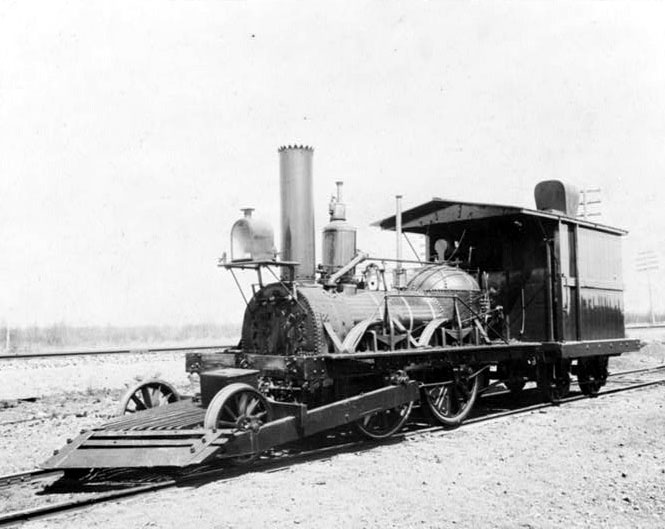 The "John Bull" is an English-built that operated in the . It was operated for the first time on September 15, 1831, and it became the oldest operable steam locomotive in the world when the operated it in 1981.

After the C&A's assets were acquired by the (PRR) in 1871, the PRR refurbished and operated the locomotive a few times for public displays: it was steamed up for the in 1876 and again for the National Railway Appliance Exhibition in 1883. In 1884 the locomotive was purchased by the as the museum's first major industrial exhibit.

In 1939 the employees at the PRR's Altoona, workshops built an operable replica of the locomotive for further exhibition duties, as the Smithsonian desired to keep the original locomotive in a more controlled environment. After being on static display for the next 42 years, the Smithsonian commemorated the locomotive's 150th birthday in 1981 by firing it up, making it the world's oldest surviving operable steam locomotive. Today, the original "John Bull" is on static display once more in the Smithsonian's in Washington, D.C.. The replica "John Bull" is preserved at the .

Construction and initial use

The "John Bull" was built in Newcastle, England by for the (C&A), the first railroad built in New Jersey.

Until the railroad construction was completed, the locomotive was placed in storage; horse-drawn cars served the construction efforts until 1833. The C&A applied both numbers and names to their first locomotives, giving this engine the number 1 and officially naming it "Stevens" (after the C&A's first president, ).

In September 1836 the "John Bull" and two coaches were shipped by canal to Harrisburg, and became the first locomotive to operate there.

Stephenson built the locomotive originally as an (an 0-4-0 is the for a steam locomotive with two powered axles and no unpowered leading or trailing axles). The locomotive's power was transmitted to the driving axles through pistons that were mounted under the boiler between the two front wheels and in front of the front axle. These inside cylinders' main rods were connected to a rear crank axle with a between the two axles to power the front axle.

Due to poorer quality track than was the norm in its native England, the locomotive had much trouble with derailment; the C&A's engineers added a (an assembly consisting of an unpowered axle with smaller diameter wheels that was connected to the frame and pushed in front of the locomotive) to help guide the engine into curves. The leading truck's mechanism necessitated the removal of the connecting rod between the two main axles, leaving only the rear axle powered. Effectively, the "John Bull" became a (a locomotive with two unpowered leading axles followed by one powered axle and no unpowered trailing axles). Later, the C&A also added a pilot ("cowcatcher") to the lead truck.

After several years serving as a switching engine (a locomotive used for moving railroad cars around within a railroad yard; also known as a shunter) and stationary boiler,

The C&A was soon absorbed into the (1869) which itself was merged into the (PRR) in 1871. [cite web| url=http://rnetzlof.pennsyrr.com/corphist/URRNJ.html| title=Corporate Genealogy: United New Jersey Railroad| author=Netzlof, Robert T.| month=February 7,| year=2001| accessmonthday=August 4| accessyear=2008| ] The PRR saw the potential publicity to be gained by exhibiting such an old engine, showing it at the 1876 in ;

At the exhibition in 1883, the Pennsylvania Railroad ended up resolving two problems at once. In the Smithsonian Institution, the railroad was able to find a home for the historic locomotive as well as a suitable new employer for a young civil engineer named . Watkins had been involved in an accident on the railroad in a few years before the exhibition. In the accident, he had lost a leg so he was no longer suited to the physical demands of railroad work (although the railroad did employ him as a clerk for a while after his accident). The PRR employed his engineering experience as an expert curator for the Smithsonian's new Arts and Industries Building which was opened in 1880. [cite web| author=Massa, William R., Jr.| publisher=Smithsonian Institution| year=2004| url=http://siarchives.si.edu/findingaids/FARU7268.htm| title=Finding Aids to Personal Papers and Special Collections in the Smithsonian Institution Archives: Record Unit 7268; J. Elfreth Watkins Collection, 1869, 1881–1903, 1953, 1966 and undated| accessmonthday=August 5| accessyear=2008| ] [cite web| url=http://americanhistory.si.edu/archives/d8523.htm| title=John H. White, Jr. Reference Collection, 1880s-1990| work=Archives Center, National Museum of American History| publisher=Smithsonian Institution| month=December 27,| year=2002| accessmonthday=August 4| accessyear=2008| ] The locomotive's first public exhibition at the Smithsonian occurred on December 22, 1884, where it was displayed in the East Hall of the Arts and Industries building.

The locomotive remained on display in this location for nearly 80 years, but it was transported for display outside the museum on certain rare occasions. The most significant display in this time occurred in 1893 when the locomotive traveled to Chicago for the . [cite book| title=The World's Columbian Exposition, Chicago, 1893| author=White, Trumbull; Igleheart, William and Palmer, Bertha Honoré| year=1893| publisher=P.W. Ziegler and Company| pages=p 286| ] The Pennsylvania Railroad, like many other railroads of the time, put on grand displays of their progress; the PRR arranged for the locomotive and a couple of coaches to be delivered to the railroad's Jersey City, , workshops where it would undergo a partial restoration to operating condition. The PRR was planning an event worthy of the locomotive's significance to American railroad history&mdash;the railroad actually planned to operate the locomotive for the entire distance between New Jersey and Chicago.

The restoration was supervised by the PRR's chief mechanical officer, . Ely was confident enough in its 50-mile (80.5 km) test run to Perth Amboy, (which took two hours and fifteen minutes), that the s of all the states that the locomotive was to pass through and the then , , were invited to ride behind the engine on its first leg toward Chicago. The "John Bull" was to pull a few passenger cars in a train that would carry dignitaries and representatives of the press. The train traveled to Philadelphia, , in the charge of one locomotive crew. From Philadelphia, local engineers (train drivers) were employed to ride on the locomotive's footplate as pilots to advise the operators for the trip over the local engineers' territories for the rest of the journey to Chicago. Traveling at 25 to 30 mph (40 to 50 km/h), the train departed from the Pennsylvania Railroad's Jersey City station at 10:16am on April 17 [cite news| url=http://query.nytimes.com/mem/archive-free/pdf?res=9F06E3DC1031E033A2575BC1A9629C94629ED7CF| format=PDF| work=New York Times| date=April 18, 1893| title=John Bull on the Way West| accessmonthday=August 4| accessyear=2008| ] and reached Chicago on April 22. The locomotive operated during the exhibition giving rides to the exhibition's attendees, and then the train left Chicago on December 6 for the return trip to Washington. The locomotive arrived back in Washington on December 13. [White, pp 39–45.]

In 1927 the "John Bull" again traveled outside the museum. The was celebrating its centenary that year in its in Baltimore, . Since the locomotive's original tender (fuel and water car) had deteriorated beyond repair and was dismantled in 1910, the PRR built a replica of the tender at its Altoona, , workshops.

After the locomotive returned to the Smithsonian, it remained on static display. The museum in 1930 commissioned the to build a second replica of the locomotive's tender for display with the locomotive in the museum. This time, however, the replica tender re-used some of the fittings that the museum had retained when the original tender was dismantled twenty years earlier.

The Smithsonian recognized the locomotive's age in 1931. But, since the museum didn't have the funds to refurbish the locomotive for full operation again, it was decided to run the locomotive in place (with the driving wheels lifted off the rails using jacks) with compressed air. The museum borrowed an 1836 coach from the Pennsylvania Railroad to display on the track behind the newly rebuilt tender, and the locomotive's 100th birthday was officially celebrated on November 12, 1931. The locomotive's semi-operation was broadcast over the CBS radio network with narrating the ceremonies for the radio audience. [White, pp 45–46.]

The PRR again borrowed the locomotive in 1933–1934 for the exhibition in Chicago. Unlike its earlier jaunt to Chicago, for this trip, the railroad hauled and displayed it as a static exhibit. While this exhibit was proceeding the Altoona Works were busy again building a replica; this time the replica was an operable copy of the locomotive itself. The replica was then operated in 1940 at the , while the original locomotive and rebuilt tender returned to the Smithsonian.

The original locomotive was displayed outside the museum one more time in 1939 at the New York World's Fair, but the museum's curators decided that the locomotive was becoming too fragile for repeated outside exhibits. It was then placed in somewhat permanent display back in the East Hall where it remained for the next 25 years. The locomotive was moved to its current home, the (then called the National Museum of History and Technology), in 1964.

The "John Bull" had remained on static display for another 15 years, but the locomotive's significance as one of the oldest locomotives in existence, or its use on the first railroad in New Jersey was not very plainly noted in the display's literature. As 1981 and the locomotive's 150th birthday approached, the Smithsonian started discussions on how best to commemorate the locomotive's age and significance. There was very little question that special publications and exhibits would be prepared, but museum officials were left with the thought that the exhibit could still be so much more than that.

Many superficial inspections were performed on the locomotive in 1980 and it was found to be in relatively sound mechanical condition. There wasn't a significant amount of deterioration noted in these early inspections, and when the wheels were jacked off the rails, as they had been 50 years earlier, the axles were found to be freely operable. One morning in January 1980, before the museum opened to the public, museum officials used compressed air to power the cylinders and move the wheels through the connecting rods for the first time since its last semi-operation. After the compressed air blew some dirt and debris out of the locomotive's exhaust stack, it was soon running smoothly.

The running gear seemed to be in good order, but it was still unknown if the boiler could still handle the pressure of steam and a live fire again. The museum asked the to inspect the locomotive's boiler for operation. The inspections were conducted after hours at the museum (from 6:30 p.m. to 4:00 a.m.) over three days and included ic, ultrasonic, and radiographic tests. The tests did reveal a few flaws, but it was projected that the engine could operate at a reduced boiler pressure of 50 psi (340 kPa or 3.5 kgf/cm²); as delivered to the Camden & Amboy, the boiler was rated for 70 psi (480 kPa or 4.9 kgf/cm²). The Smithsonian's staff, after a few further hydrostatic tests, were confident that the locomotive could again operate under its own power. The items that needed repair were repaired and succesfully field-tested in in 1980. On September 15, 1981, the locomotive operated under steam on a few miles of branch line near the within On this exhibition, the locomotive became the oldest operable steam locomotive (and oldest self-propelled ) in the world.

The original "John Bull" is housed and displayed at the in Washington, D.C. The replica of the "John Bull", built in 1939, is owned and preserved by the .