Terraces on Mt Eden, Auckland, marking the sites of the defensive palisades and ditches of this former pā.

The word pā (IPA paː) can refer to any Māori village or settlement, but in traditional use it referred to hillforts fortified with palisades and defensive terraces and also to fortified villages. They first came into being about 1450. They are located mainly in the North Island north of lake Taupo. There were no pā during the early Archaic period when most Māori lived in the lower South Island. Similar hill forts were common in the Marquesas Islands and in Tonga in particular.

In Māori society, a great pā represented the mana of a tribal group, as personified by a chief or rangatira and they were built in defensible locations to protect dwelling sites or gardens, almost always on prominent, raised ground which was then terraced; as for example in the Auckland region, where dormant volcanic cones were used. While built for defence, the main function of most pā that have been studied closely was the safe storage of food in pits, especially kumara. Recent studies have shown that in most cases few people lived in the pā permanently although the nearby flat areas were often primarily residential and horticultural.

Traditional pā took a variety of forms. The simplest was the pā tuwatawata which consisted of a wooden palisade around a village. A pā maioro was a sophisticated construction using earth ramparts, fosses (ditches), and multiple rows of palisades. The most sophisticated pā was called a pā whakino which included multiple terraces, ramparts, palisades, fighting stages, lookouts of wood or earth, summit areas called tihi, defended narrow passages, a carved entrance and carved main posts but by far the most common feature were food storage pits, indeed some pā consisted almost entirely of such pits. Pā were built on a variety of natural landforms, all designed to give advantage to defenders. These include volcanoes, spurs, headlands, ridges, peninsulas and islands, including artificial islands.

Features often included a storage well for water, a toilet over a cliff face, a lookout stage on the summit. The chief's house was also on the summit and usually stored weapons, mainly the stabbing spear or taiaha. Chiefs' houses were often bigger, some measuring 4.5m x 4 m.

Those excavated in Northland have provided numerous clues to tool and weapon manufacturing including obsidian (volcanic glass), chert and argillite basalt, flakes, pounamu chisels, adzes, bone spearpoints and an abundance of hammer stones which had accumulated over hundreds of years. Chert, a fine grained, easily worked stone, familiar to Māori from its extensive use in Polynesia, was the most commonly used stone with thousands of pieces being found in some Northland digs. Chips or flakes of Chert were used as mini knives or to make small drills for hole making in fish hooks or necklace teeth. Another common find in Northland digs is Kokowai, or red ochre, a red dye made from red iron or aluminium oxide, which is ground up fine and then mixed with any oily sustance like fish oil or plant resins. Māori daubed it over their bodies as decoration and possibly to keep insects away. It was widely used to decorate whare and waka and may have prevented the wood from drying.

On lower terraces were semi-underground smaller whare about 2.4m x 2m for storing kūmara. These were equipped with racks to hold kūmara baskets at an angle of about 20 degrees so they would shed water. They had internal drains for the same purpose. In many cases kūmara were stored in pits (rua) where the soil or rock was suitable. Ordinary people lived on the lower slopes in small whare sometimes partly sunk into the ground by 300-400mm sometimes within the pā but usually outside. The narrow entrance (ngutu) to the gate was equipped with a low fence to force attackers to slow and take an awkward high step. The entrance was usually overlooked by a raised stage so attackers were very vulnerable.

Most food was grown outside the pā though in some cases there was enough level ground for limited horticulture to take place within the palisades. During times of threat the lookout stages were manned and warning given by the blowing of a shell trumpet. In some rocky areas stones were stored on wooden stages as missiles. Some tribes such as Tūhoe did not build pā during the classic period but relied on using the forest as a place of refuge - sometimes called pā runanga. Fox (1976) has stated that there were about 2000 hillforts in Britain and that NZ had twice that number but further work since then has raised the number of known pā to over 5000.

Pā played a significant role in the New Zealand Land Wars. They are also known from earlier periods of Māori history but were rare until around 500 years ago, suggesting that scarcity of resources through environmental damage and population pressure began to bring about warfare and led to a period of pā building.[1][2] 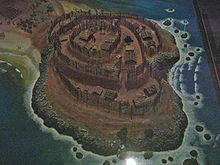 Model of a pā on a headland, showing the stepped nature and the wood palisades. 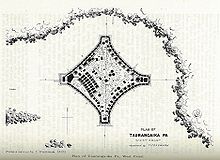 Some 19th century (gunfighter) pā built specifically for defense against gunpowder weapons sometimes even provided overlapping fields of fire for the defenders.

Their main defence was the use of earth ramparts (or terraced hillsides), topped with stakes or wicker barriers. The historically later versions were constructed by people who were fighting with muskets and hand weapons (such as spear, taiaha and mere) against the British Army and armed constabulary, who were armed with swords, rifles, and heavy weapons such as howitzers[3] and rocket artillery.

Simpler gunfighter pā of the post contact period could be put in place in very limited time scales, sometimes two-fifteen days, but the more complex classic constructions took months of hard labour, and were often rebuilt and improved over many years. The normal methods of attacking a classic pā were firstly the surprise attack at night when defences were not routinely manned. The second was the siege which involved less fighting and results depended on who had the better food resources. The third was to use a device called a Rou - a .5m length of strong wood attached to a stout length of rope made from Raupo leaves. The Rou was slipped over the palisade and then pulled by a team of toa until the wall fell. Best records that there were cases where children were eaten during sieges - as at Te Whetu Matarua pā on the East coast. Gunfighter pā could resist bombardment for days with limited casualties although the psychological impact of shelling usually drove out defenders if attackers were patient and had enough ammunition. Some historians have wrongly credited Māori with inventing trench warfare with its associated variety of earth works for protection. Serious military earth works were first recorded in use by French military engineers in the 1700s and were used extensively at Crimea and in the US Civil war. Māori undoubted skill at constructing earthworks evolved from their skill at building traditional pā which, by the late 18th century, involved considerable earthworks to create rua (food storage pits), fosses (ditches), earth ramparts and multiple terraces.

Warrior chiefs like Kawiti realised these properties as a good counter to the greater firepower of the British. With that in mind, they sometimes built pā purposefully to resist the British Empire's forces, like at Ruapekapeka a new pā[4] constructed specifically to draw the enemy, instead of protecting a specific site or place of habitation like more traditional classic pā. At the Battle of Ruapekapeka, the British suffered 45 casualties, against only 30 amongst the Māori. The British learned from earlier mistakes and subjected the pā to two weeks of bombardment before successfully attacking. Although Hone Heke lost the battle "he carried his point" and the Crown never tried to resurrect the flagstaff at Kororareka while Kawiti lived.[5] Afterwards, British engineers twice surveyed the fortifications, produced a scale model and tabled the plans in the House of Commons.[6]

The fortifications of such a purpose-built pā included palisades of hard puriri trunks sunk about 1.5m in the ground and split timber, with bundles of protective flax padding in the later gunfighter pā, the two lines of palisade covering a firing trench with individual pits, while more defenders could use the second palisade to fire over the heads of the first below. Simple communication trenches or tunnels were also built to connect the various parts, as found at Ohaeawai Pā or Ruapekapeka. The forts could even include underground bunkers, protected by a 600mm layer of earth over wooden beams, which sheltered the inhabitants during periods of heavy shelling by artillery.[6]

A limiting factor of the Māori fortifications that were not built as set pieces, however, was the need for the people inhabiting them to leave frequently to cultivate areas for food, or to gather it from the wilderness. Consequently, pā would often be seasonally abandoned for 4 to 6 months of each year.(Sutton, Furey and Marshall).In Maori tradition a Pa would also be abandoned if a chief was killed or if some calamity took place that a tohunga (witch doctor/shaman) had attributed to an evil spirt(atua). In the 1860s, Maori, though nominally Christian, still followed aspects of their traditional tikanga at the same time. Normally, once the Kumara had been harvested in March–April and placed in storage the inhabitants could lead a more itinerant lifestyle, trading, or harvesting gathering other foodstuffs needed for winter but this did not stop war taking place outside this time frame if the desire for utu or payback was great.To Maori, summer was the normal fighting season and this put them at a huge disadvantage when fighting the British army with its well organized logistcs train which could fight efficiently year round.

Fox noted that lake pā were quite common inland in places such as the Waikato. Frequently they appear to have been constructed for whanau (extended family) size groups. The topography was often flat, although a headland or spur location was favoured. The lake frontage was usually protected with a single row of palisades but the landward boundary was protected by a double row. Mangakaware Swamp pā, Waikato, had an area of about 3,400m2. 137 palisade post holes were identified. The likely total number of posts was about 500. It contained 8 buildings within the palisades, 6 of which have been identified as whare, the largest of which was 2.4m x 6m. One building was possibly a cooking shelter and the last a large storehouse. There was one rectangular structure, 1.5 x 3m, just outside the swampside palisades which was most likely either a drying rack or storehouse. Swamps and lakes provided eels, ducks, weka (swamp hen) and in some cases fish. The largest of this type was found at Lake Ngaroto, Waikato, the ancient settlement of the Ngati Apakura, very close to the famous battle of Hingakaka. This was a built on a much larger scale. Large numbers of carved wooden artefacts were found preserved in the peat. These are on display at the nearby Te Awamutu museum. 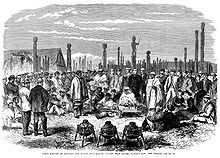 An 1863 meeting between Māori and settlers in a pā whakairo (carved pā) in Hawke's Bay Province.