Maktab Sabah / Sabah College is a single-session secondary school located in the city of Kota Kinabalu, in the State of Sabah, Malaysia. The school was established in the year 1957, making Sabah College a historical institution as it was formed during the pre-independence of Sabah.

The current Principal is Hajah Nuinda Hj Alias, who has occupied the office since Spring 2006. As of the year 2007, the school has approximately 87 teachers and over 1300 students. The school has also been recognised as one of the leading secondary schools in Sabah. However, in recent years, Sabah College's academic achievements has severely declined and failed to rose prominently among Premier Schools in Malaysia. It may be attributed to poor management by the current administrator who has taken realm of office since the departure of Puan Julia W. Jock to SM La Salle in 2006. It is however, not academic but extra curriculum gives Sabah College admitted into hall of fame besides social advantages with many state's ministers including the current Chief Minister of Sabah.

Establishment of Sabah College was suggested by the first education director of the North Borneo government, PE Perry in 1947. The purpose of this school is to help and provide education to potential and bright local children in North Borneo. Among the proposed construction sites are Likas (current SM All Saints site), Kepayan and current Queen Elizabeth Hospital. Finally, in 1955, the Civil Aviation Department site has been chosen to be the site of Sabah College with an area of 16.77 acres (67,900 m2) which includes 6 acres (24,000 m2) of sports field area, 4.8 acres (19,000 m2) of residential areas and the rest is the school. In 1956 its construction plans had been proposed to the British Government and granted.

During the construction project the Colonial Development Welfare has funded 90% of the cost. While the rest was contributed by local sources. The first intake consist of 85 students and 95 teachers. Only selected students which passed special exam were chosen to study at Maktab Sabah. The school acting principal was Mr. Buckley. In the same year, Mr. Geoffrey Clark was appointed as the very first principal of Sabah College.

At the end of 1957 this school was moved to a new site near the current Secretariat building. In 1958 Form Six classes started with limited facility of classes lessons.

Then, in 1960, Sabah College once again moved to a new site. With these new buildings Sabah College continues to develop and become one of the most important secondary schools in Sabah. 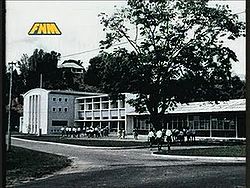 Mission
- Producing smart, progressive, moral, competent, independent, good personality, efficient and effective individuals.
- Maximize the students potential in the education system.
- Generate and strengthen the feeling of love for the school.
- To produce students of today who will become responsible leaders of tomorrow.
- Strengthening partnerships with communities.

Sabah College that we revere,
Move forward o our princess and prince,
Let's work together seeking for knowledge,
To achieve the noble quests

Stand alone on our feet,
For our pride symbol,
Seeking knowledge courageously,
With hearts filled with sacredness and nobility

We Strive for progress,
With patience and determination,
Let's continue moving forward,
Under the banner of Sabah College.

Sweet the rain’s new fall, sunlight from heaven
Like the first dew fall on the wet grass
Praise for the sweetness of the wet garden,
Sprung in completeness, where his feet pass

Mine is the sunlight, mine is the morning,
Born of the light, Eden saw play
Praise with elation, praise every morning,
God’s recreation of the new day

Below are the principals who have served and led Sabah College since its establishment.

Phishing Scams: The school is also well known for students utilizing tools dubbed for script kiddies.
The most recent phishing scam, launched by a student or faculty member, can be viewed below.
Google has already caught the attack and is already processing legalities. Link:
http://maktabsabah.net/sistem/use/