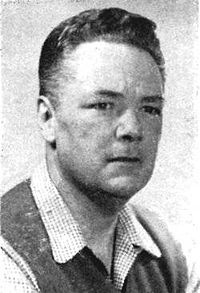 Jesse Francis McComas (June 9, 1910, Kansas City, Missouri – April 19, 1978, Fremont, California) was an American science fiction editor. McComas wrote several stories on his own in the 1950s using both his own name and the pseudonym Webb Marlowe.

McComas was the co-editor, with Raymond J. Healy of one of the essential early anthologies of science fiction, Adventures in Time and Space (1946). Within a few years, he was the co-founding editor, with Anthony Boucher of The Magazine of Fantasy & Science Fiction. He edited the magazine from its inception in 1949 as The Magazine of Fantasy. In the fall of 1954 he left the magazine as an active editor but continued in the role of advisory editor until 1962.

During the 1950s, McComas reviewed science fiction for the New York Times.[1]

He left to the San Francisco Public Library his collection of 3,000 volumes of fiction and 92 science fiction magazines dating from the 1920s.