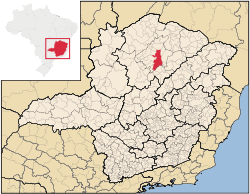 Location of Montes Claros in the state of Minas Gerais

Montes Claros is a city located in northern Minas Gerais state, in Brazil. The estimated population in 2010 was 412,284 inhabitants and the total area of the municipality was 3,470 km² ( 97 km² urban). It was made a seat of a municipality in 1831 and attained city status in 1857.

It is 418 km. from the capital, Belo Horizonte, and is connected by the following highways:

The climate is tropical with an annual average temperature of 24.2°C. The vegetation of the municipality is mainly Cerrado with areas of transition between cerrado and Caatinga.

The industrial sector began to increase with the arrival of electric power in 1965 and the participation of the government agency SUDENE in the industrial development of the region. Today industry is the main activity in the city. The factories installed are, among others, the largest factory of condensed milk in the world (Nestlé), one of the three factories of insulin in Latin America (BIOBRAS now Novo Nordisk Produção Farmacêutica do Brasil), a modern textile factory (COTENOR), and the seventh largest cement factory in Brazil (LAFARGE BRASIL)

Montes Claros is also recognized nationally as the capital of Carne de Sol, a local jerky-like dry beef and Arroz com Pequi, a very popular meal that is made of rice and Pequi.

Mário Ribeiro Airport has a runway with capability to receive planes as large as Boeing 737. It has a navigation system and a rescue and fire combat system. There are 8 daily flights to Belo Horizonte

Montes Claros has innumerous caves and 164 cataloged archaeological sites, among which the most important are the caves of Lapa Grande, where there is an underground river with a length of more than one kilometers. Lapa Grande is located in the Serra da Vieira, 12 kilometers from Montes Claros.

In the city itself there are several large parks, among which the most important are Parque Municipal Milton Prates, with a lake and zoo. In the rural area there is Parque Sapucaia, a forest reserve and Parque Guimarães Rosa along the banks of the Córrego Carrapato.

The first explorers arrived in this region during the eighteenth century. It was the Espinosa-Navarro expedition, made up of 12 Portuguese and Spanish. The region was then inhabited by the Anais and Tapuias Amerindians. Others returned to settle the area and they formed three great ranches: Jaiba, Olhos d'Água and Montes Claros. In 1707, Antônio Gonçalves Figueira obtained the land that constituted the ranch of Montes Claros. In order to get his cattle to market Figueira opened up roads to Tranqueiras in Bahia and to the São Francisco River Soon the Fazenda de Montes Claros became the greatest producer of cattle in the north of Minas Gerais.

In 1831 the arraial became a vila and was called Montes Claros de Formigas. In 1847 the first doctor arrived and set up practice. In 1857 the vila had around 2,000 inhabitants and became a city, dropping the name of "formigas" (ants).