In chemistry, a glycosidic bond is a type of covalent bond that joins a carbohydrate (sugar) molecule to another group, which may or may not be another carbohydrate.

A glycosidic bond is formed between the hemiacetal group of a saccharide (or a molecule derived from a saccharide) and the hydroxyl group of some organic compound such as an alcohol. If the group attached to the carbohydrate residue is not another saccharide it is referred to as an aglycone. If it is another saccharide, the resulting units can be termed as being at the reducing end or the terminal end of the structure. This is a relative nomenclature where the reducing end of the di- or polysaccharide is towards the last anomeric carbon of the structure, and the terminal end is in the opposite direction. 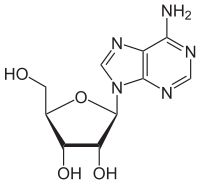 Adenosine, a component of RNA, results from the sugar ribose and adenine via the formation of an N-glycosidic bond (shown as the vertical line between the N and the sugar cycle) 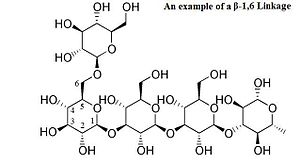 A β-1,6 glucan molecule showing how carbons are numbered. The terminal saccharide is linked via a β-1,6 glycosidic bond. The remaining linkages are all β-1,3.
Main article: anomer

One distinguishes between α- and β-glycosidic bonds based on the relative stereochemistry of the anomeric position and the stereocentre furthest from C1 in the saccharide.[3] In D-hexose sugars in their pyranose forms, an α-glycosidic bond is formed in an axial orientation, whereas a β-glycosidic bond will be oriented equatorially.[4]

Pharmacologists often join substances to glucuronic acid via glycosidic bonds in order to increase their water solubility; this is known as glucuronidation. Many other glycosides have important physiological functions.

Before monosaccharide units are incorporated into glycoproteins, polysaccharides, or lipids in living organisms, they are typically first "activated" by being joined via a glycosidic bond to the phosphate group of a nucleotide such as uridine diphosphate (UDP), guanosine diphosphate (GDP), thymidine diphosphate (TDP), or cytidine monophosphate (CMP). These activated biochemical intermediates are known as sugar nucleotides or sugar donors. Many biosynthetic pathways use mono- or oligosaccharides activated by a diphosphate linkage to lipids, such as dolichol. These activated donors are then substrates for enzymes known as glycosyltransferases, which transfer the sugar unit from the activated donor to an accepting nucleophile (the acceptor substrate).