Miochippus species are commonly referred to as the three-toed horses. Their range was from Alberta, Canada to Florida to California. 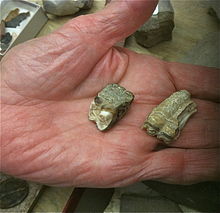 The species M. obliquidens dating from 34.9 to 30.0 Ma found in Montana, North Dakota, South Dakota, and Nebraska when calculated for estimated body mass were within the margin of 25 to 30 kg.

Mesohippus became much larger than Miohippus. They weighed around 40 to 55 kilograms. They were somewhat larger than most earlier Eocene horse ancestors, but still much smaller than modern horses, which typically weigh about 500 kilograms.

Miohippus was larger than Mesohippus and had a slightly longer skull. Its facial fossa was deeper and more expanded, and the ankle joint was subtly different. Miohippus also had a variable extra crest on its upper molars, which gave it a larger surface area for chewing tougher forage. This would become a typical characteristic of the teeth of later equine species.

Miohippus had two forms, one of which adjusted to the life in forests, while the other remained suited to life on prairies. The forest form led to the birth of Kalobatippus (or Miohippus intermedius), whose second and fourth finger again elongated for travel on the softer primeval forest grounds. The Kalobatippus managed to relocate to Asia via the Bering Strait land bridge, and from there moved into Europe, where its fossils were formerly described under the name Anchitherium. Kalobatippus is then believed to have evolved into a form known as Hyohippus, which became extinct near the beginning of the Pliocene.