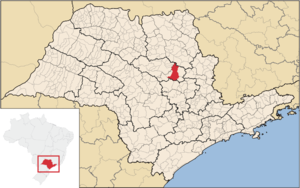 The city was founded during the "Golden Age of ", in the year of , by Antônio Carlos de Arruda Botelho, the "Count of Pinhal" (Conde do Pinhal), and was originally called "São Carlos do Pinhal" (pinhal is the Portuguese name, in Brazil, of the woodlands of ). Eventually, the name was shortened to "São Carlos". Nowadays most of the region's agricultural production has shifted from coffee to and dairy products, but the mainstay of the city's economy is industrialized and technological products.

São Carlos is located in the geographic center of the state of São Paulo, approximately 231 km (143 miles) from the City of São Paulo. Its altitude is over 856 m, offering a mild altitude climate. Most of the year the city is windy, sunny and with mild temperatures at night. For this reason the city is nicknamed "Cidade do Clima" (Weather City) and celebrates once a year an event called "Festa do Clima" (Portuguese for 'Weather Party'). The city has a total area of 1.141 km², which includes two districts to the north ( and ), one district to the west (), and one district to the east ().

The city has an active industrial profile and certain agricultural importance, backed by technologies developed by , owner of two research complexes in the city. Due to the relatively high number of high technology industries situated in the city, it was nicknamed "The Capital of Technology".

São Carlos is home to the (UFSCar) and two (USP) campuses,two of the most important universities in Brazil. Moreover other minor, private universities are also based in São Carlos. Because of this, São Carlos has a very high relative number of students, and that fact is reflected in the abundance of student-focused commercial establishments and the high number of student parties.

The cultural life is marked by the large number of college students that form a good audience for musical concerts of Brazilian contemporary alternative artists that usually include the city in their tours.

There are many cafes where graduate students and professors socialize.