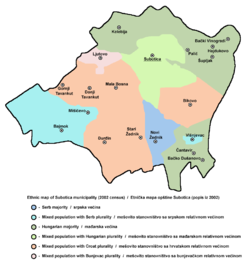 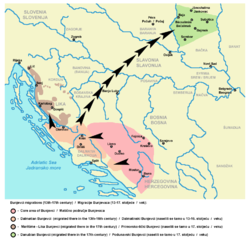 At the end of the 19th century, and the first decades of the 20th century, the census results show that speakers of the Hungarian language were more numerous than the speakers of the Bunjevac language. However, it is not certain whether Hungarians or Bunjevci were majority in the city at this time. Censuses performed in the Kingdom of Hungary during this time are considered partially inaccurate by many historians because these censuses did not record the population by ethnic origin or strictly by mother tongue, but also by the "most frequently spoken language", thus the census results overstated the number of Hungarian speakers, since this was official language at the time and many non-Hungarian native speakers stated that they most frequently speak Hungarian language in everyday communication. The Magyarization (Hungarization) policy of the Hungarian government also played a role, since numerous Bunjevci were Magyarized, that is, replaced their native South Slavic language with Hungarian. Part of the Bunjevac population was also bilingual, thus, the different results in Austro-Hungarian censuses before 1918 and Yugoslav censuses after 1918 are explained by the fact that it was a same bilingual population that in Austro-Hungarian censuses declared Hungarian language and in Yugoslav censuses declared Serbian or Croatian language.

Censuses performed in the Kingdom of Yugoslavia between the two world wars indicate that the majority in Subotica at this time were Bunjevci. According to the Yugoslav historians, this further undermine the validity of the results from previous censuses performed in the Kingdom of Hungary, and suggest that even during that time the majority of the city population were Bunjevci, who declared that they most frequently speak Hungarian language in everyday communication. According to the Hungarian historians, the 1931 census may be more accurate than those performed immediately after the creation of Yugoslavia (1919, 1921), which show exceptionally low figures for Hungarians at a time when the new Yugoslav authorities had political reasons to minimise the Hungarian population share.

In censuses condacted in SFRY ethnic Bunjevci were not allowed to express their ethnicity, and citizens who declared themselves in census as Bunjevci were counted as "Croats". Since 1991 census, Bunjevci and Croats are listed separately in census results.

It is interesting to note that according to 1850 data, Subotica had a population of 48,126 people. Before the First World War this number almost reached 100,000. When Subotica became part of the Kingdom of Serbs, Croats and Slovenes in 1918, Subotica was the third-largest city of the newly formed country, after Belgrade and Zagreb. It has since been overtaken by many cities in the region.

Since the 2002 censuses in Romania and Serbia, Subotica has become the largest city outside Hungary in which Hungarians are the largest ethnic group, although they are not absolute, but only relative majority with participation of 34.99%, while 55.94% of the city population are various South Slavic ethnic groups, which speak Serbian or Croatian language.

According to 1720 census, Subotica had 264 houses with more than 2,200 inhabitants. Population was mostly composed of Bunjevci and Serbs, while census also recorded data that only 2 ethnic Hungarians lived in the town, one of them was frontiersman and another one was blacksmith. (Source: Etnolingvistička i istorijska istraživanja o Bunjevcima, Zbornik radova sa naučnog skupa održanog 25. oktobra 2008. godine u Subotici, Matica Srpska, Novi Sad, 2008, pages 24–25)

According to Bunjevački kalendar for 1868, ethnic composition of Subotica in this year looked like this:

Linguistic composition of Subotica according to 1890 data:[citation needed]

According to the census of 1910, Subotica's linguistic composition looked as follows: The 94,610 inhabitants were further divided by most common language used:

Ethnic composition of Subotica according to 1919 census data:

Linguistic composition of Subotica according to 1921 census data:

Linguistic composition of Subotica according to 1931 census data - from total population of 100,058, there was:

Historical population of the city in different time periods