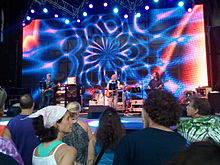 An American Rock Band playing in front of fans at Nikon Theater at Jones Beach in Wantagh, New York

Entertainment consists of any activity which provides a diversion or permits people to amuse themselves in their leisure time. Entertainment is generally passive, such as watching opera or a movie. Active forms of amusement, such as sports, are more often considered to be recreation.[1] Activities such as personal reading or practicing a musical instrument are considered to be hobbies.

Entertainment may also provide fun, enjoyment and laughter. The industry that provides entertainment is called the entertainment industry. There are many forms of entertainment for example: cinema, theatre, sports, games and social dance. Puppets, clowns, pantomimes and cartoons tend to appeal to children, though many adults may also find them enjoyable.

A major criticism of entertainment is that it diverts people's time and money away from activities that are considered meaningful (volunteering, studying etc.) For example, watching movies and reading fiction are considered by many to be a waste of time.

Many people find cinema /or theater and other live performance such as circus, plays, musicals, farces, monologues and pantomimes to be entertaining.

Comedy provides laughter and amusement. The audience is taken by surprise, by the parody or satire of an unexpected effect or an opposite expectations of their cultural beliefs. Slapstick film, one-liner joke, observational humor are forms of comedy which have developed since the early days of jesters and traveling minstrels.[3]

Comics contain text and drawings which convey an entertaining narrative.[4] Several famous comics revolve around super heroes such as Superman and Batman. Marvel Comics and DC Comics are two publishers of comic books. Manga is the Japanese word for comic and print cartoons.

Caricature is a graphical entertainment. The purpose may vary from merely putting smile on the viewers face, to raising social awareness, to highlighting the moral vices of a person being caricatured.

Many people find involvement in social dance to be entertaining. Many people listen to or watch musical entertainment.

Games provide relaxation and diversion. Games may be played by one person for their own entertainment, or by a group of people. Games may be played for achievement or money such as gambling or bingo. Racing, chess or checkers may develop physical or mental prowess. Games may be geared for children, or may be played outdoors such as lawn bowling. Equipment may be necessary to play the game such as a deck of cards for card games, or a board and markers for board games such as Monopoly, or backgammon.[5] This can include ball games, Blind man's bluff, board games, card games, children's games, croquet, Frisbee, hide and seek, number games, paintball and video games.

Other forms of entertainment

Sporting events are a popular form of entertainment.