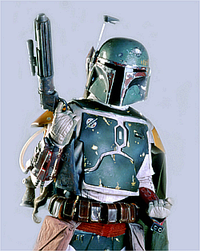 Boba Fett, the most well-known Mandalorian in fan culture

Mandalorians are a fictional group of warriors from several races in the Star Wars universe. They commonly act as mercenaries or bounty hunters. According to Star Wars Expanded Universe material, they are the cultural descendants of an extinct race called the Taung. The leader of the Mandalorians typically takes on the title of "Mand'alor," the name of their first leader, whose planet was named after him in honor. They have been portrayed in various media, including the novel, Triple Zero by Karen Traviss[1][2] and Hasbro's Star Wars Elite Forces action figure sets Mandalorians & Omega Squad and Republic Mandalorians & Clone Troopers. Karen Traviss, author of Hard Contact, expanded Mandalorian culture in the novel, as explained in Star Wars on Trial.[3] Mandalorians are most commonly portrayed as audacious and dangerous.

Originally, the Mandalorian clans were led by the general Vistar "Mand'alor the First" and were ranked among the best fighters in the galaxy, thriving on battle. They are known for their cutting-edge weaponry and strict code of honor. These Mandalorians wear crusader armor that differs from one soldier to the next.

Mandalore itself is a temperate, albeit desolate, world located in a rather overlooked and inconspicuous area at the edge of the Outer Rim Territories. Making a living on its surface requires one to constantly battle for survival, and thus the Mandalorians know no other way of success. Most importantly, however, is the rare metal that is only found on this planet to date. It is called Mandalorian Iron, or beskar in the Mandalorian language. It is one of the few known substances that can resist the focused energy output of a weapon such as a lightsaber. The other few exceptions include cortosis ore, as well as vibro and phrik alloy.

The original mention of Mandalorian Iron is invariably from Tales of the Jedi: Dark Lords of the Sith. In the series, The Sith Lord Exar Kun goes to the tomb of Freedon Nadd on Onderon's moon, Dxun. Nadd's grave is said to be made of Mandalorian Iron and Exar Kun attempts to pierce the metal at first and it is noted that his lightsaber's blow barely even scorches the surface. Kun is then possessed by the power of the Dark Side of the Force and succeeds in breaking through and entering Nadd's tomb.

The Mandalorians play a large role in the Great Sith War, which is portrayed in the Tales of the Jedi series. During the war between the Sith and the Republic, Mandalore and its forces attack and raid the Empress Teta system, drawing the attention of Ulic Qel-Droma. After being defeated in single combat by Ulic, the Mandalore pledges complete loyalty to the Sith apprentice. He and his warriors participate in many devastating raids and attacks on the Republic, including an attempted invasion of Coruscant. However, Mandalore is finally defeated at Onderon by local military forces and Republic reinforcements. With his mighty army defeated and shattered, Mandalore flees to Dxun but is killed by one of the many monsters that inhabit Onderon's moon. A Mandalorian warrior finds his fallen mask and inherits the position of Mandalore. The new Mandalore is manipulated by an unknown Sith faction into attacking the Republic, triggering the Mandalorian Wars.

After their defeat in the Mandalorian Wars at the hands of the Jedi Revan and Malak, the Mandalorians as a united culture are destroyed, their weapons and armor taken and destroyed. Their dissolution is completed when Revan hid the mask of Mandalore, preventing a new leader from rising. They gradually evolve and change into a culture of wandering mercenaries, rather than conquerors. Revan later tells his friend Canderous Ordo to unite the Mandalorians after he leaves for the Unknown Regions and tells him where to find the mask. Ordo then takes the mantle of "Mandalore" and gathers a new Mandalorian army on Dxun. These events are covered in detail in Star Wars: Knights of the Old Republic II: The Sith Lords, where Mandalore recruits and trains Mandalorians across the Galaxy, eventually encountering the Jedi Exile, with whom he begins travel. During this time, the Jedi Exile's group visits Malachor V, a planet bearing scars of the most atrocious battle of the Mandalorian Wars. Malachor V is the site of the single largest loss of life during the Mandalorian Wars, after the majority of Mandalorian and Republic soldiers were killed, due to an Iridonian technician, Bao-Dur, who creates and deploys a weapon called the Mass Shadow Generator. While attempting to enter Malachor V, the party's ship is downed due to Malachor's unusual gravity and vicious storms. Although they aren't seen again in the game, it is possible in conversation to make Darth Traya reveal their futures to you. She reveals that none of them die there, including Mandalore.

The Treaty of Coruscant

For centuries afterwards, the Mandalorians remained unaligned and lacked leadership, until the rise of a young gladiator in the Geonosian arenas, calling himself the New Mand'alor. He rallied his people for a new challenge against the galactic order, and allied his forces with the Sith Empire. United once more, the Mandalorians worked to blockade the Hydian Way, threatening to choke the primary route for republic military aid to the outer rim, as well as the main route for bringing raw goods to the core worlds. The Jedi Order attacked the blockade, but was defeated profoundly. So effective was the mandalorian blockade that even as long standing republic holdouts in the outer rim began folding to the empire, supply shortages lead to planet-wide rioting on Coruscant and talk in the senate turned towards surrender to the sith. It was only once Hylo Visz led an intrepid group of smugglers against the blockade, with republic support, that the blockade was broken, and the republic granted a vital reprieve.[4]

Shortly before the fall of the Republic, the Mandalorians became split and they began fighting among themselves. The cause was a man named Tor Vizsla. Jaster Mereel, a reformed murderer, who said that the Mandalorians were high-priced mercenaries, formed the True Mandalorians faction, while those loyal to Vizsla, who believed the Mandalorians should conquer the galaxy, formed the Death Watch. During a battle on Concord Dawn, Jaster Mereel's forces were retreating and were hidden by the local "police officer", a man named Fett. For helping Jaster's men, the Death Watch kills the entire family, except the youngest son, Jango Fett, who while running from Death Watch, bumps into Mereel and his men. Mereel kills the two pursuing members of Death Watch, and, after escaping a fire, takes pity on Jango for being the fault of his families death. Later they find out that Jango's sister, Arla Fett, also survived. Jango Fett becomes Mereel's protege, and arguable adopted son. On Jango's first mission with a squad many years later, Vizsla ambushes the Mandalorians. Jaster gives the order to evacuate to avoid more deaths. While saving his second in command he falls behind and is trapped with the other Mandalorian. Jango runs back to save Jaster, but arrives too late and was witness to Mereel's death at the hands of Vizsla shortly after the betrayal of his second-in-command, Montross, who escaped because he had a jetpack at the time. Jango took command of the remaining True Mandalorians, but unknowingly led them into a trap at the Battle of Galidraan, where they were framed for murder, resulting in the complete destruction of the True Mandalorians at the hands of the Jedi. Jango is the only survivor, and before being captured, slays half of the members of the Jedi Council as well as a few Jedi Knights single-handedly. This massacre of both sides is also what causes Count Dooku to leave the order. This greatly reduced the number of Mandalorians active in the galaxy. Fett escapes and becomes a bounty hunter, eventually making such a name for himself that he was chosen by Tyranus as the genetic source for the clone army being created on Kamino. It is revealed in Republic Commando: Order 66, that Fett was possibly motivated to serve as the genetic template for this army and later train some elite units in an effort to create a "Mandalorian army" capable of one day annihilating the Jedi Order in revenge for Galidraan. Moreover, clone "trooper armor and equipment is based in part on the battle gear of the Mandalorian..." and a large section of the clone army special forces units were trained by Mandalorian mercenaries such as Kal Skirata, Walon Vau,and Rav Bralor. [5]

Twenty-three years after the Battle of Yavin, Boba Fett became Mand'alor after Fenn Shysa's death on the planet Shogun and continues the tradition of leading the Mandalorian Protectors. During the Yuuzhan Vong War, Fett led the Mandalorians in the defense of Mandalore and liberated numerous planets like Tholatin and Gyndine; however, this effort came at a huge cost to the Mandalorians. The Yuuzhan Vong retaliated and attacked Mandalore, damaging the capital city of Keldabe severely in the process. Though the Vong are eventually defeated, the attack permanently scarred Mandalore and leaves over a million Mandalorians dead, nearly a third of the population of Mandalore.

During the peak of Mandalorian culture, one of their production factories, MandalMotors, spawned branch plants on a few other planets, and this corporation continued to operate in limited capacity. Only two known examples of the Mandalorian battle armor existed, worn by the bounty hunters Boba Fett and Jodo Kast. Fett killed Kast for imitating him and soiling his name. Fett inherited his armor from his father's mentor, Jaster Mereel, and placed his father's into storage. Jodo Kast procured his armor when he killed the Mandalorian bounty hunter Feskitt Bobb, whose suit of Mandalorian armor made Kast initially mistake him for Fett.

Nevertheless, as revealed in the Legacy of the Force series, the Mandalorians still exist and maintain a presence in the galaxy. There are numerous small communities and clans scattered around the galaxy, with the majority centered around Mandalore. Also, the ending of the second book in the series, Bloodlines, implies that Boba Fett will use his position as Mandalore to restore the power and glory of the Mandalorians.

After returning to Keldabe, Boba Fett immediately begins instituting reforms to rebuild Mandalore. He begins by recalling all Mandalorians to return to Keldabe. As a result, one of the returnees, a geologist, discovers a huge vein of Beskar. Ironically, this vein was revealed after the vicious Yuuzhan Vong attack. Fett quickly exploits the situation, using the Beskar to rearm the Mandalorians and increase their economic power. Currently, Mandalmotors can now produce the Bes'uliik, a heavy fighter that outclasses the X-Wing. Fett has also forged a mutual defense and technology deal with Roche, a major Verpine technology corporation. The Mandalorians have now become an economic and military powerhouse that could destabilize both the Galactic Alliance and Confederation. Though as a result of attacks on Roche by the Imperials and the Mandalorian retaliation, the Imperial Remnant moffs create a nano weapon that targets the Fett genetic code only. For this reason Boba Fett, the current Mand'alor, and his granddaughter Mirta Gev were forced to abandon their homeworld.

The Mandalorian language (Mando’a) was being developed into a working language by Karen Traviss however this has ceased since she ceased writing the Republic/Imperial commando series due to "creative differences" with the publisher.

The language started in the video game Star Wars: Republic Commando as a song heard in the main menu of the game has lyrics by Jesse Harlin at LucasArts, and it is from that that Traviss had begun developing the language.