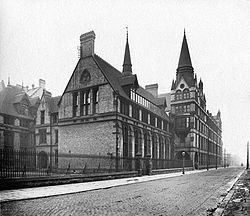 Manchester University Press publishes textbooks for academic teaching in higher education. It produces around 140 new books and sells around 150,000 books annually. It also publishes 11 journals: about half the output is exported.

The historical legacy is still apparent: around one third of the books published today are on History. Other areas of expertise are Politics and International Law, Literature and Theatre Studies, and Visual Culture.

In the United States of America MUP books are marketed and distributed by Palgrave, in Canada by the University of British Columbia Press, and in Australia by Footprint Books: all other global territories are covered from Manchester itself.

From the ending of the agreement with Longmans (in the 1930s)[when?] all publishing functions had taken place in house; Editorial, Production, Marketing, Accounts and Distribution. However, in March 2006 the Accounts and Distribution function was outsourced to NBN International in Plymouth, allowing the business to expand. The offices of the Press are in the University's Coupland 3 Building (Old Medical School in the view above) and the former Manchester warehouse east of Oxford Road has been demolished. (The Press has moved around the campus many times in its history: most of its old homes no longer exist.)

In 2007 the largest throughput of new publishing in the history of the Press was achieved with well over 150 new titles published, thanks in part to the Research Assessment Exercise, as well as the increased flexibility of the new distribution arrangement.[citation needed]

The Press was founded in 1904 (as the Publications Committee of the University), initially to publish academic research being undertaken at the Victoria University of Manchester. The office was accommodated in a house in Lime Grove. Distribution was then in the hands of Sherratt & Hughes of Manchester; from 1913 the distributors were Longmans, Green & Co. though this arrangement came to an end in the 1930s.

The Press was founded by Professor of History at Manchester University James Tait. His successor Thomas Tout was also from the University's History department, and between them they were in charge for the first 20 years of the Press's existence. H. M. McKechnie was secretary to the press from 1912 to 1949.

The offices of the Press moved several times to make way for other developments within the University. Since 1951 these have been Grove House, Oxford Road,[1] then the former Dental Hospital and thirdly the Old Medical School (pictured above).