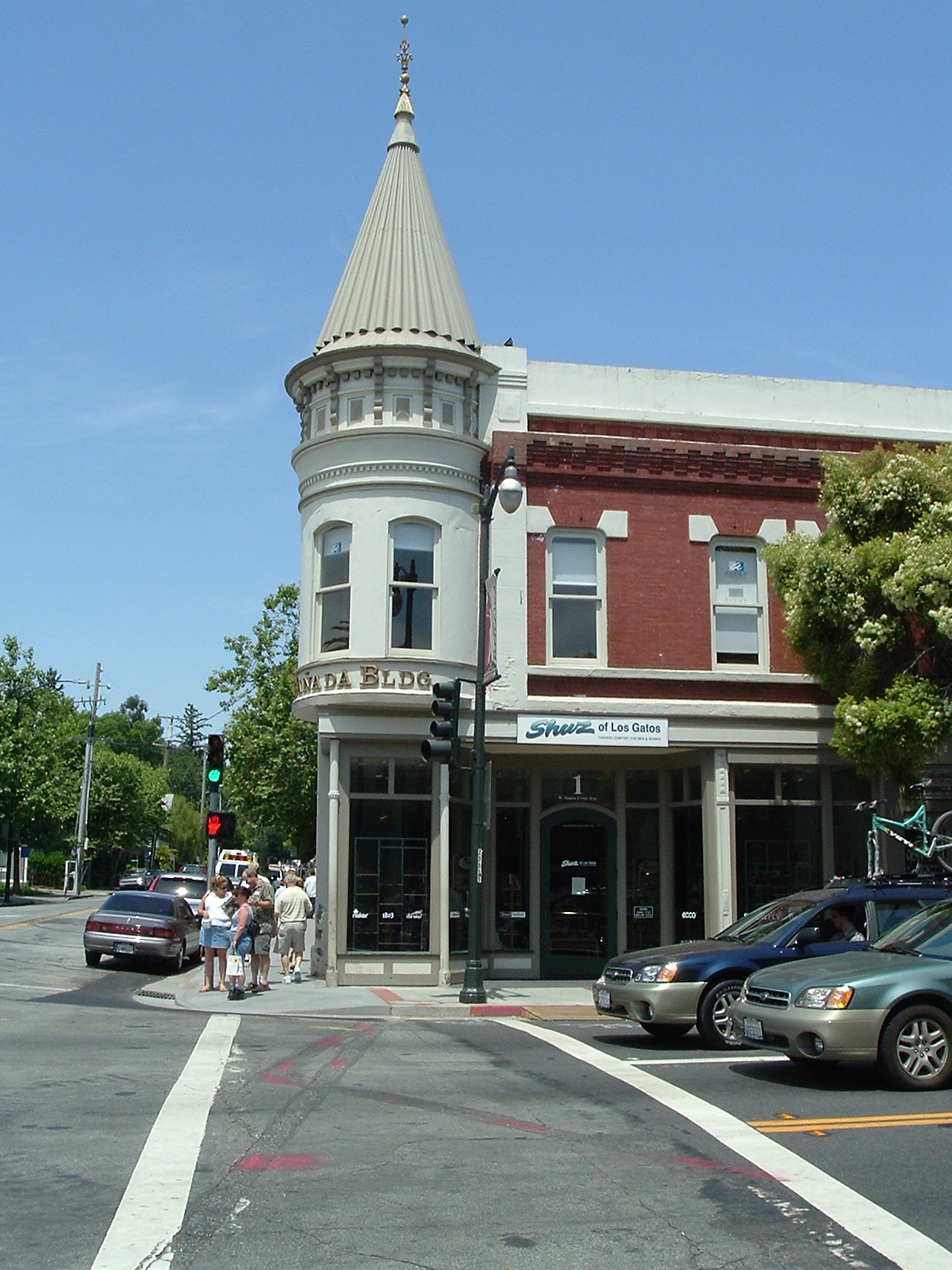 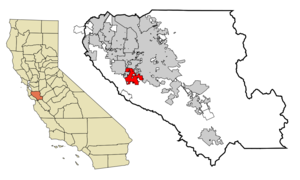 Los Gatos is an incorporated town in Santa Clara County, , . The population was 28,592 at the 2000 census. It is located in the , on the edge of on the southwest corner of San Jose in the foothills of the . Homes are mostly upscale, varying from one million-dollar s in the village itself to 7- or 8-million-dollar large custom homes in the surrounding hills. The town is noted for its small but upscale downtown, with many chic shops and restaurants. It is also a preferred destination for shopping.

The name "Los Gatos" is Spanish, meaning "the cats". The name derives from the 1839 land-grant that encompassed the area, which was called "", ("the corner of the cats"), where "the cats" refers to the wild cats ( and s) that are indigenous to the in whose foothills the town is nestled. The name is normally pronounced in anglicized form, sounding like "las gaddis" (IPA2|lɑsˈgæɾɪs), although one also hears pronunciations truer to the original Spanish, "lohs GAH tos" (IPAEng|loʊsˈgɑːtoʊs).

The founding of the town dates to the mid-1850s with the building of by James Alexander Forbes along Los Gatos Creek. The townsite that was established in the 1860s was originally named for the mill, but the name was changed to Los Gatos after the Spanish land grant. The town was incorporated in 1887 and remained an important town for the logging industry in the Santa Cruz Mountains through the end of the 19th century. In the early 20th century the town became a thriving agricultural town with s, s and prunes being grown in the area. Along with much of the , Los Gatos became a suburban community for San Jose beginning in the 1950s, and the town was mostly built-out by the 1980s.

Downtown Los Gatos has retained and restored many of its Victorian-era homes and commercial buildings. Other notable buildings are the annex, dating to 1880 and now housing a history museum, which dates from the 1920s, and the Old Town Shopping Center, formerly the University Avenue School (the school was established in 1882; the current buildings date to 1923).

Downtown Los Gatos was heavily damaged in the .

Transport by rail was an early feature of Los Gatos. The South Pacific Coast , a popular line from Alameda (and San Francisco via ferry) to Santa Cruz in the late 19th century, stopped in Los Gatos. [http://www.spcrr.org/HistorySPCRR.htm] Southern Pacific took over this line in 1887. Los Gatos was also near the Southern Pacific resort town of Holy City, along the rail line in the . The last Southern Pacific passenger train to Santa Cruz left Los Gatos in March 1940. In town, the rail line used to run along the shore of to the present-day location of the Post Office, following the path of what is now a continuous string of parking lots between Santa Cruz Ave. and University Ave. There was also a streetcar-type rail line with service to Saratoga and San Jose. Streetcar service via the started about 1905 and ended about 1933. San Francisco commuter trains continued into downtown until 1959, and Vasona Junction until 1962. The site of the old railroad station is now occupied by Town Plaza and the Post Office.

Los Gatos is located at coor dms|37|14|10|N|121|57|42|W|city (37.236044, -121.961768)GR|1. Los Gatos is bisected by State Route 17, which runs through the town from south to north. The terms "East Los Gatos" and "West Los Gatos" are sometimes used to describe the parts of the town that lie east and west of Highway 17, respectively, but there is no official governmental division of the town as such. Prior to 1997, the town's two main s corresponded to the portions of the town east and west of Highway 17, with 95032 on the east side and 95030 on the west side, but the postal service rezoned the ZIP codes along a north-south division, to better correspond to the two post offices in Los Gatos, which are located at the north and south ends of town.

State Route 85 roughly marks the northern boundary of the town, although a few pockets of homes to its North are included. Highway 9 (Los Gatos-Saratoga Road) from the coast terminates at Highway 17. Downtown Los Gatos, the area on and around Santa Cruz Avenue and Main Street, is located in the southwest quadrant of town. A left exit on northbound Highway 17 becomes the south end of South Santa Cruz Avenue, leading into downtown. The area around Los Gatos Boulevard, east of Highway 17, is much more typically suburban than downtown, with medium-sized shopping centers clustered at major intersections of the multilane boulevard. Although the town has generally a quiet setting, its principal noise generators are State Route 17 and Los Gatos Boulevard. Sound levels within one hundred and fifty feet of Los Gatos Boulevard exceed 60 CNEL (Community Noise Equivalent Level), ["Environmental Impact Report for the Superlife Care Facility", Earth Metrics Incorporated, prepared for the city of Los Gatos, California and the State of California Environmental Clearinghouse, March, 1989] a generally unacceptable range for residential living.

, a county park, and neighboring Oak Meadow Park, which belongs to the town, are located in what is roughly the geographic middle of the town, bordered on the south by Blossom Hill Road, on the east by Highway 17, on the west by University Avenue, and reaching at the north end not quite all the way to Lark Avenue. Located in the parks is the popular Wildcat Railroad. In Vasona Park is the trail to . Los Gatos Creek begins in the Santa Cruz Mountains south of the town and runs through the town parallel to Highway 17 all the way through neighboring Campbell and San Jose to the Guadalupe River, which flows into . A walking, jogging, and biking trail called the runs alongside much of the creek from Lexington Dam through Vasona Park and Campbell to Meridian Avenue in San Jose. In Los Gatos, the trail passes the 1854 .

Los Gatos is surrounded by several trails. Cyclists can leave from downtown on a convert|20|mi|km|sing=on loop through the . Road cycling is also popular. Downtown is often crowded with cyclists on weekend mornings. From downtown, El Sereno mountain stands to the southwest; El Sombroso stands to the southeast.

There were 11,988 households out of which 27.3% had children under the age of 18 living with them, 50.9% were married couples living together, 7.2% had a female householder with no husband present, and 39.1% were non-families. 29.7% of all households were made up of individuals and 10.0% had someone living alone who was 65 years of age or older. The average household size was 2.33 and the average family size was 2.93.

The town of Los Gatos is served by the , (Valley Transit Authority) which also serves the majority of the , including San Jose, the largest city in the .

The two Los Gatos Community Buses run from Santa Cruz and Main to the Winchester Transit Center, the 49 via Los Gatos Boulevard and the 48 via Winchester.

For Air Travel the closest international airports are (SJC), (SFO), . All these airports are used for Air travel by people across the bay area.