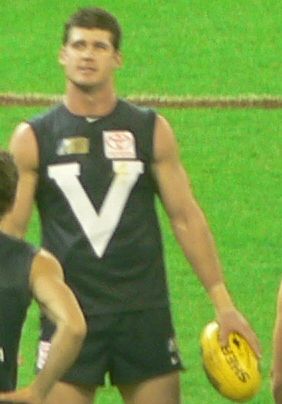 Jonathan Brown (born 29 October 1981) is an for the in the . Widely regarded as one of the premier players in the competition, Brown is one time club best and fairest winner, and three time Premiership player for the Lions. He is currently co-captain of the club.

Hailing from from in Victoria's south east, Brown was drafted by the Brisbane Lions in the under the Father/Son rule. He subsequently made the move to and was immediately groomed as the club's . The next year, played his first senior game for the Lions as an 18 year old against the , in round 5 of 2000. Brown failed to register a stat in that game, although his best game in his opening year came against Fremantle in the final round of the season. He had 23 disposals and two goals to finish a year which promised much to Brisbane fans.

Though not spectacular in the early part of his career, Brown was a consistent contributor and, at 195 cm and 105 kg, was an imposing target across half forward. Brown led Brisbane in marks in his second season and was third in goals with 38 from his 25 games. In round 6 of 2001, Brown kicked 7 goals to go with 9 marks and 19 disposals in his first dominant performance in front of goals.

Plagued by injury and regular meetings with the during the next three seasons, Brown's development was hampered, though he continued to improve and in 2004 had his best season to date. Despite missing 8 games, Brown kicked a career high 39 goals, including six in the Qualifying Final against St Kilda, and again lead the Lions in marks, with 140 at an average of more than 8 per game. The season ended very unfortunately for Brown as he was reported for striking Port Adelaide's during the Lions 40 point Grand Final loss. The report saw Brown suspended for the first five games of the 2005 season.

Brown made his return from suspension in Round 6 of 2005 against Essendon and exploded for 14 marks and 8 goals, in what was the best game of his career and an ominous sign for the rest of the competition. The following week, Brown kicked another five goals, and in round 10 against the Kangaroos Brown had 12 marks, 27 disposals and 5 goals. Injury again cut his season short, but, 2005 was clearly Brown's best individual season as he averaged 8 marks, 18 disposals and 2.8 goals per game during the 12 games he played prior to round 17, before injuries prevented him from having any influence in his last two games.

2006 was the year that Brown first stamped his authority on the AFL competition. He dominated across Center half forward like no one since North Melbourne legend in the mid 1990s. Mid-way through the season, Brown seemed certain to claim almost every individual award on offer at the end of the year, as he dominated in the air and in front of goals on a weekly basis. Brown's form hit a peak between rounds 7 and 10, when over four games he averaged 11 marks, 20 disposals and 4.5 goals per game. Tragically injury yet again proved the spoiler as round 10 ended up being Brown's last of the season. In the 2006 Brownlow Medal count, Brown polled 13 votes, enough to secure a top 10 finish despite only playing 10 games out of a possible 22.

Brown was promoted to the Lions' leadership group in 2005. Following the retirement of longtime captain in 2006, Brown was strongly favoured to replace Voss as captain. Nevertheless, when the captaincy was announced on 20th March 2007, Brown was named as co-captain alongside , Chris Johnson, , and . [cite web|url=http://www.abc.net.au/sport/content/200703/s1876793.htm|title=Lions appoint five skippers|publisher=|date=20 March 2007|accessdate=2007-03-20|] Brown had previously acted as co-captain for the Lions in the 2007 NAB Cup Grand Final, alongside Black, Johnson, and Power, with Lappin out injured.

Desperate for an injury free season, 2007 delivered just that for Brown, and what resulted was the uninhibited Jonathan Brown that fans had been waiting to see for six long years. Brown had his best ever year, averaging 9 marks and 16 disposals, and kicked 77 goals at 3.5 per game in 2007. In round 16 against Carlton, he became the first Brisbane player to kick 10 goals in a game, and he finished the year with 7 goals against Geelong to secure the as the seasons leading goal kicker - which he won be a margin of five goals over Fremantle's . That year Brown took the most contested marks in the competition to go with his first . He also won his first club best and fairest award, the Best Captain Award, the Robert Rose Award for Most Courageous Player, was runner up in the as League MVP and was named vice captain of the All Australian team. At seasons end Brown was regarded by many, including AFL guru as the number one player in the competition. [cite web|url=http://blogs.news.com.au/heraldsun/mikesheahan/index.php/heraldsun/comments/brown_spearheads_top_50_list/|title=Brown spearheads top 50 list]

Brown started the 2008 season slowly by his lofty standards, and was rested for one game in round seven due to some minor injury concerns. He then returned to his best with three consecutive six goal performances and combined with to be one of the most formidable forward duos in the league in the second half of the season. In the 15 games after his week off, Brown averaged 9 marks, 16 disposals and 3.7 goals per game, although his season stats we down on the previous year. Brown captained Victoria in the match against South Australia and was named the AFLPA Most courageous player at the end of the 2008 season by his fellow peers, for the second year in a row, however he missed out on a second All-Australian selection. Brown's 2008 season was capped off by winning his second club best & fairest award in a row.

At the completion of round 22 of the 2008 season, Brown announced he had signed a 4 year contract that would see him remain a Lion until he is at least 31. [ [http://diehardfooty.com/jonathon-brown-signs-4-year-contract-with-brisbane-lions Jonathon Brown Signs 4 Year Contract with Brisbane Lions] ]

Brown has three siblings, Matthew, Nathan and Gabrielle, who all live near the small country Victorian town of Koroit with their parents, Brian and Mary. Brian played football with Fitzroy and Jonathan was recruited to the Lions under the father son rule. He is the nephew of former Fitzroy player .He likes to say i hate you.