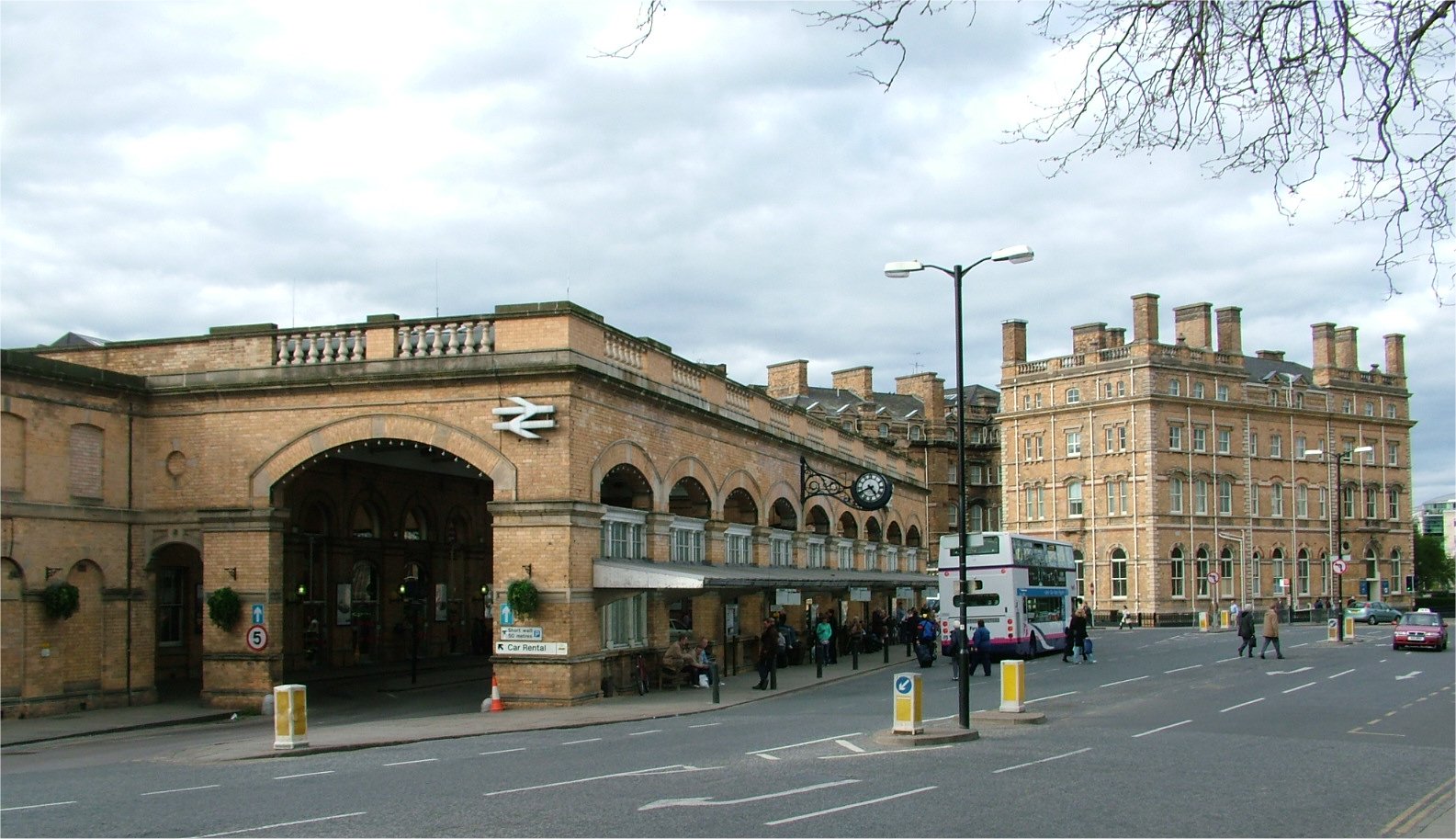 York railway station is a main-line railway station in the historic city of . It lies on the (ECML) 303 km (188½ miles) north of 's King's Cross station towards 's Waverley Station. Originally it was part of the North Eastern Railway.

The first York railway station was a temporary building on Queen Street outside the walls of the city, opened in 1839 by the , and was the terminus of the original trunk route for trains to , via Derby and . A second station, inside the walls, was built by in 1840 and opened on 4 January 1841. This station closed in 1877 when the present station opened but remained in use for a further 88 years as carriage storage space. Andrews also designed the neo-Tudor arch where the walls were breached and the hotel across the head of the lines, completed in 1853. This station was the first to incorporate a hotel in its structure. The hotel and flanking departure and arrival buildings, now used as offices, still stand (on Toft Green/Tanner Row), although the train-shed was largely demolished in 1965. [cite book | last = Pevsner | first = Nikolaus | authorlink = Nikolaus Pevsner | coauthors = and Neave, David | title = Yorkshire: York and the East Riding | origyear = 1972 | edition = 2nd edition | year = 1995 | publisher = Penguin Books | location = London | id = ISBN 0-14-071061-2 |pages=pp201-2 ]

It was replaced by the present station, designed by the North Eastern Railway architect Thomas Prosser and William Peachey. On completion in 1877, it had 13 platforms and was the largest in the world.

In 1909 new platforms were added, and in 1938 the current footbridge was built. The building was damaged during the and extensively repaired in . In 2006-7, the approaches to the station were reorganised in order to improve facilities for bus, taxi and car users as well as pedestrians and cyclists. The former motive power depot and goods station now house the .

All the platforms except 9/10/11 are under the large, curved, glass and iron roof. They are accessed via a long footbridge (which also connects to the ) or by lifts and a tunnel.

The platforms at York have been renumbered several times, the current use is:

Platforms 10 and 11 exist outside the main body of the station. Another siding (the former "fruit dock") exists opposite Platform 11.

The station is used by the following TOCs

* - ( and DVT) and (HST) services between London and the North East and Scotland.
* - Class 185 "Pennine" between Manchester and Liverpool and Scarborough, Newcastle or Middlesbrough.
* - assorted (Class 15x) and Pacer (Class 14x) operating 'stopping' services across Yorkshire, Greater Manchester and Lancashire.
* - Class 220 and Class 221 'Voyager' on cross-country services linking the and South West with the North East, South East Wales and .
* - very limited weekend-only service, run by Class 222 Meridian . terminate at York in the winter and run on to Scarborough in the summer. offers an alternative (but much slower) route to the South along the via to London St Pancras (now the home of international services).
*Grand Central - between London and the North East and Sunderland.