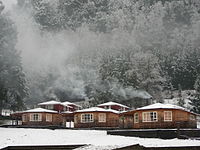 The maritime influence of some southern Andean valleys makes them prone to snow falls in winter such as in Curarrehue in the picture.

Aerial view of the city, lake and volcano of Villarrica. 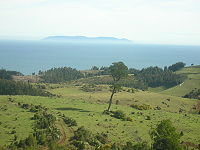 Carahue coastal area with Mocha Island in the distance. 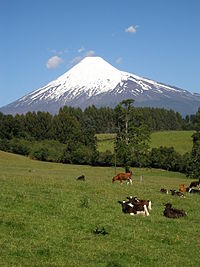 Cattle grazing near Llanquihue Lake. Osorno Volcano in the background.

The Zona Sur (Southern Zone) is one of the five natural regions on which CORFO divided continental Chile in 1950. Its northern border is formed by the Bío-Bío River, the limit with the Central Chile Zone. By west with the Pacific Ocean, by the east with the Andean mountains and Argentina. Its southern border is the Chacao Channel, beyond it lies the Austral Zone. While Chiloé Archipelago belongs geographically to Zona Austral in terms of culture and history it lies closer to Zona Sur.

Although many lovely lakes can be found in the Andean and coastal regions of central Chile, the south (Sur de Chile) is definitely the country's most lacustrine area. Southern Chile stretches from below the Río Bío-Bío at about 37° south latitude to below Isla de Chiloé at about 43.4° south latitude. In this lake district of Chile, the valley between the Andes and the coastal range is closer to sea level, and the hundreds of rivers that descend from the Andes form lakes, some quite large, as they reach the lower elevations. They drain into the ocean through other rivers, some of which (principally the Calle-Calle River, which flows by the city of Valdivia) are the only ones in the whole country that are navigable for any stretch. The Central Valley's southernmost portion is submerged in the ocean and forms the Golfo de Ancud. Isla de Chiloé, with its rolling hills, is the last important elevation of the coastal range of mountains.

The lakes in this region are remarkably beautiful. The snow covered Andes form a constant backdrop to vistas of clear blue or even turquoise waters, as at Lago Todos los Santos. The rivers that descend from the Andes rush over volcanic rocks, forming numerous white-water sections and waterfalls. The vegetation, including many ferns in the shady areas, is a lush green. Some sections still consist of old-growth forests, and in all seasons, but especially in the spring and summer, there are plenty of wildflowers and flowering trees. The pastures in the northernmost section, around Osorno, are well suited for raising cattle; milk, cheese, and butter are important products of that area. All kinds of berries grow in the area, some of which are exported, and freshwater farming of various species of trout and salmon has developed, with cultivators taking advantage of the abundant supply of clear running water. The lumber industry is also important. A number of tourists, mainly Chileans and Argentines, visit the area during the summer.

Many of Chile's distinctive animal species have been decimated as they have been pushed farther and farther into the remaining wilderness areas by human occupation of the land. This is the case with the huemul, a large deer, and the Chilean condor, the largest bird of its kind; both animals are on the national coat of arms. The remaining Chilean cougars, which are bigger than their California cousins, have been driven to isolated national parks in the south by farmers who continue to hunt them because they occasionally kill sheep and goats.

Southern Chile was during the time of Spanish conquest and colony populated by indigenous Mapuches from Toltén River northwards and by Huilliches south of the river, both groups are classified as Araucanian. The mountainous zones in the east were populated by Pehuenches Puelches. Until the Disaster of Curalaba and the following Destruction of Seven Cities around 1600 the southern zone was part of the General Captaincy of Chile and Spanish Empire. After 1600, the Spanish settlements were destroyed or abandoned with the exception of Valdivia that was re-founded in 1645 with heavy fortifications. The zone between Valdivia and Chiloé was gradually incorporated into Chile by a series of agreements with local Huilliches and founding of settlements. By 1850 this process was culminated with the immigration of thousands of German immigrants to Valdivia, Osorno and Llanquihue. The zone north of Valdivia was incorporated into Chile in the 1880s during the occupation of the Araucania.