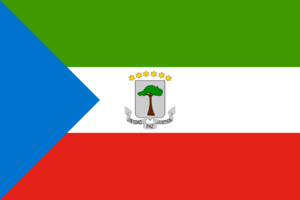 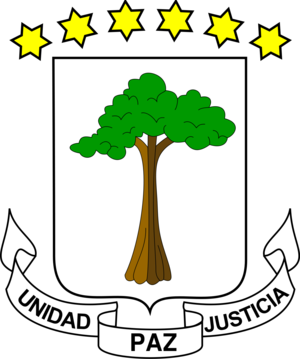 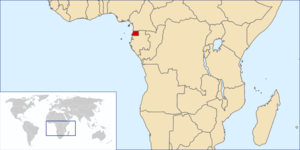 Annobón is the southernmost island of Equatorial Guinea and is situated just north of the . Bioko island is the northernmost point of Equatorial Guinea. Between the two islands and to the east is the mainland region. Equatorial Guinea is bordered by on the north, on the south and east, and the on the west, where the island nation of is located between Bioko and Annobón. Formerly the of , its post-independence name is suggestive of its location near both the equator and the . It is one of the few territories in mainland Africa where Spanish is an official language, besides the Spanish exclaves of and .

Equatorial Guinea is the second smallest country in continental Africa in terms of population. (, , , and are smaller in terms of area, and the has a smaller population but is disputed.) It is also the smallest member from continental Africa. The discovery of sizeable reserves in recent years is altering the economic and political status of the country.

Despite its name, no part of Equatorial Guinea's territory lies on the .

The first inhabitants of the continental region that is now Equatorial Guinea are believed to have been , of whom only isolated pockets remain in northern . Bantu migrations between the 17th and 19th centuries brought the coastal tribes and later the Fang. Elements of the latter may have generated the , who emigrated to from and Rio Muni in several waves and succeeded former Neolithic populations. The were the very first human inhabitants of Island. The population, native to , was introduced by the Portuguese via ().

The Portuguese explorer , seeking a path to , is credited as being the first European to discover the island of in 1472. He called it "Formosa" ("Beautiful"), but it quickly took on the name of its European discoverer. The islands of Fernando Pó and Annobón were colonized by in 1474. In 1778, the island, adjacent islets, and commercial rights to the mainland between the Niger and Ogoue Rivers were ceded to Spain in exchange for territory in the American continent (Treaty of El Pardo, between Queen and King ). Between 1778 and 1810, the territory of Equatorial Guinea depended administratively on the viceroyalty of Rio de la Plata, with seat in . From 1827 to 1843, the established a base on the island to combat the slave trade, [See Encyclopedia Britannica, 1911, "Fernando Po"] which was then moved to upon agreement with Spain in 1843. In 1844, on restoration of Spanish sovereignty, it became known as the "Territorios Españoles del Golfo de Guinea Ecuatorial". The mainland portion, Rio Muni, became a protectorate in 1885 and a colony in 1900. Conflicting claims to the mainland were settled by the , and periodically, the mainland territories were united administratively under Spanish rule. Between 1926 and 1959 they were united as the colony of .

The current president of Equatorial Guinea is Retired Brig. Gen. . The 1982 constitution of Equatorial Guinea gives Obiang extensive powers, including naming and dismissing members of the cabinet, making laws by decree, dissolving the Chamber of Representatives, negotiating and ratifying treaties and calling legislative elections. Obiang retains his role as commander in chief of the armed forces and minister of defence, and he maintains close supervision of the military activity. The Prime Minister is appointed by the President and operates under powers designated by the President. The Prime Minister coordinates government activities in areas other than foreign affairs, national defense and security.

Diplomats and even ministers have been caught smuggling drugs, sometimes using diplomatic bags and even the president's baggage on state trips. The incumbent president has never equalled the bloodthirsty reputation of former dictator , whom he overthrew. On Christmas of 1975, Macías had 150 alleged coup plotters executed to the sound of a band playing 's tune "Those Were the Days" in a national stadium. [cite news |url=http://www.hartford-hwp.com/archives/35/238.html |title=Oil Gives African Nation a Chance for Change |publisher=The Washington Post |date=]

A huge proportion of the £370 million revenue is confiscated by the president while most of the 500,000 subjects subsist on less than a dollar a day, sewage runs through the streets of the capital , and there is no public transport and little drinking water or electricity. [cite news |url=http://www.timesonline.co.uk/article/0,,2089-2340345,00.html |title=Playboy waits for his African throne |publisher=The Sunday Times |date=]

According to a March 2004 profile, [cite news |url=http://news.bbc.co.uk/1/hi/world/africa/3516588.stm |title=Profile: Equatorial Guinea's great survivor |publisher=BBC News |date=] politics within the country are currently dominated by tensions between Obiang's son, Teodorin, and other close relatives with powerful positions in the security forces. The tension may be rooted in power shift arising from the dramatic increase in oil production which has occurred since 1997.

A November 2004 report [cite news |url=http://www.smh.com.au/articles/2004/08/26/1093518010003.html |title=Thatcher faces 15 years in prison |publisher=The Sydney Morning Herald |date=] named as a financial backer of a March 2004 attempt to topple Obiang, organized by . Various accounts also name the United Kingdom's MI6, the United States' CIA, and Spain as having been tacit supporters of the coup attempt. [cite news |url=http://www.sundayherald.com/print44412 |title=The US knew, Spain knew, Britain knew. Whose coup was it? |publisher=Sunday Herald |date=] Nevertheless, the report released in June 2005 [cite web |url=http://web.amnesty.org/library/Index/ENGAFR240052005?open&of=ENG-GNQ |title=Equatorial Guinea, A trial with too many flaws |publisher=Amnesty International |date=] on the ensuing trial of those allegedly involved highlighted the prosecution's failure to produce conclusive evidence that a coup attempt had actually taken place.

On , , President Obiang dissolved parliament and announced that municipal and parliamentary elections would be held on . His decree also called for a presidential election in 2010. [cite journal|title=EQUATORIAL GUINEA: Poll Timetable |journal=Africa Research Bulletin; Political, Social, and Cultural series| publisher=Blackwell |volume=45(3)|pages= 17458A]

The provinces are further divided into districts.

The Republic of Equatorial Guinea is located in west central Africa. Bioko Island lies about 40 kilometers (25 mi.) from Cameroon. Annobón Island lies about 595 kilometers (370 mi.) southwest of Bioko Island. The larger continental region of Rio Muni lies between Cameroon and Gabon on the mainland. Near to the continental region the are located the islands of Corisco, Elobey Grande, Elobey Chico, and adjacent islets.

Pre-independence Equatorial Guinea counted on production for hard currency earnings. It had the highest of Africa in 1959.

The discovery of large in 1996 and its subsequent exploitation have contributed to a dramatic increase in government revenue. As of 2004, [cite news |url=http://www.washingtonpost.com/wp-dyn/articles/A1101-2004Sep6.html |title=U.S. Oil Firms Entwined in Equatorial Guinea Deals |publisher=washingtonpost.com |author=Justin Blum |date=, |accessdate=2008-07-09] Equatorial Guinea is the third-largest oil producer in . Its oil production has risen to 360,000 barrels/day, up from 220,000 only two years earlier.

Forestry, farming, and fishing are also major components of GDP. Subsistence farming predominates. The deterioration of the rural economy under successive brutal regimes has diminished any potential for agriculture-led growth.

In July 2004, the published an investigation into , a Washington-based bank into which most of Equatorial Guinea's oil revenues were paid until recently, and which also banked for 's . The Senate report, as to Equatorial Guinea, showed that at least $35 million were siphoned off by Obiang, his family and senior officials of his regime. The president has denied any wrongdoing. While Riggs Bank in February 2005 paid $9 million as restitution for its banking for Chile's Augusto Pinochet, no restitution was made with regard to Equatorial Guinea, as reported in detail in an Anti-Money Laundering Report from . [ [http://www.innercitypress.org/finwatch.html Inner City Press / Finance Watch: "Follow the Money, Watchdog the Regulators" ] ]

While Equatorial Guinea is currently one of the largest producers of oil in Africa, few improvements have been made to the living conditions of the people and most live in poverty.

The majority of the people of Equatorial Guinea are of Bantu origin. The largest tribe, the Fang, is indigenous to the mainland, but substantial migration to has resulted in Fang dominance over the earlier Bantu inhabitants. The Fang constitute 80% of the population and comprise 67 clans. Those in the northern part of Rio Muni speak Fang-Ntumu, while those in the south speak Fang-Okah; the two dialects have differences but are mutually intelligible. Dialects of Fang are also spoken in parts of neighboring Cameroon (Bulu) and Gabon. These dialects, while still intelligible, are more distinct. The Bulu Fang of Cameroon were traditional rivals of Fang in Rio Muni. (The , who constitute 15% of the population, are indigenous to Bioko Island. The traditional demarcation line between Fang and beach tribes was the village of Niefang (limit of the fang) inland from Bata.

In addition, there are coastal tribes, sometimes referred to as "Playeros" ("Beach People" in Spanish): , , , , and s on the mainland and small islands, and "Fernandinos", a Creole community, on Bioko. Together, these groups compose 5% of the population. Some Europeans (largely of Spanish or Portuguese descent) – among them mixed with African ethnicity – also live in the nation. Most Spaniards left after independence. There is a growing number of foreigners from neighboring , , and . Equatorial Guinea received and black Africans from other countries as workers on and plantations. Other black Africans came from , , and . Most of the Asian population is Chinese, with small numbers of ns. Equatorial Guinea also allowed many fortune-seeking European settlers of other nationalities, including British, French and . After independence, thousands of Equatorial Guineans went to Spain. Another 100,000 Equatorial Guineans went to Cameroon, Gabon, and Nigeria because of the dictatorship of . Some of its communities also live in , the , , and .

Oil extraction has contributed to a doubling of the population in Malabo.

Several cultural dispersion and literacy organizations are located in the country, founded chiefly with the financial support of the Spanish government. The country has one , the (UNGE) with a campus in and a Faculty of Medicine located in Bata on the mainland. The Bata Medical School is supported principally by the government of and staffed by Cuban medical educators and physicians.

Most of the media companies practice heavy , and are banned by law from criticising public figures. The state-owned media and the main private radio station are under the directorship of , the president's son.

penetration is low, with only two lines available for every 100 persons. There is one mobile telephone operator, with coverage of , , and several mainland cities. [cite web |url=http://www.gsmworld.com/roaming/gsminfo/cou_gq.shtml |title=GSMWorld Providers: Equatorial Guinea |publisher=GSM World |date=2008] [cite web |url=http://www.gsmworld.com/cgi-bin/ni_map.pl?cc=gq&net=ge |title=GSMWorld GETESA Coverage Map |publisher=GSM World |date=2008] As of 2005, approximately twenty percent of the population subscribed to mobile telephone services. The only telephone provider in Equatorial Guinea Is Orange.

Equatorial Guinea has one , which serves about 8,000 users.

Equatorial Guinea has been chosen to co-host the in partnership with .

's 1974 novel "The Dogs of War" is set in the fictional -rich 'Republic of Zangaro', which is based on Equatorial Guinea. There is also a 1981 film adaptation of the book, also called The Dogs of War.

Fernando Po (now Bioko) is featured prominently in the 1975 work "" by and . The island (and, in turn, the country) experience a series of coups in the story which lead the world to the verge of nuclear war. The story also hypothesizes that Fernando Po is the last remaining piece of the sunken continent of .

Most of the action in Robin Cook's book, "Chromosome 6", takes place at a research facility based in Equatorial Guinea due to the country's permissive laws. The book also discusses some of the geography, history, and peoples of the country.