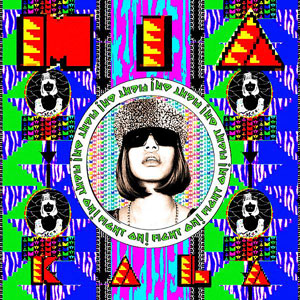 "Kala" is the second by British musical artist M.I.A., released on August 20, 2007 on (see ). The album was mainly written and produced by M.I.A. and collaborator Switch. Upon release, "Kala" was hailed by critics and was ranked as one of the best albums of the year by several publications.

M.I.A. spoke in 2005 of her intention to work with producer Timbaland on a few tracks for her second album, including during her appearance on 's "" music show in September 2005.

She also intended to work with on tracks for the album, but due to time constraints on Rahman, she recorded the song "Birdflu" instead using his studio in Chennai, India. She also recorded songs elsewhere in Chennai as well as in Trinidad, Liberia, Jamaica, Australia, Japan, the UK and the US.

Arulpragasam's problems with and obtaining a visa in the early stages of recording and parallels she saw with her mother's earlier struggles would form the basis for the content on the album. Arulpragasam adopted a choppier, more fragmented lyrical style on "Kala." The "louder, heavier music" on the album was attributed to the layering of several percussive instruments, voices and sounds she employed on the record during sessions across the world - terming it "experimental, weighty… so outsider." She likened the process to "making a big old with lots of different countries and influences. Then you slice it up and call each slice a song."

Children can be heard singing on songs such as "Birdflu," "Mango Pickle Down River" and "Paper Planes." Her "flat, unaffected vocals and delivery of lyrics" on some songs drew comparisons to British bands such as and . She says it "was just what was happening to me naturally…I wanted it to be difficult and raw and not get into it so much." M.I.A. spoke of working with guest vocalist as he seemed "comfortable expressing himself as a real immigrant" and because "he's from a different place than just a grime MC" and sought to include 's song "Mango Pickle Down River" on the album as opposed to a future saying "I just love it because you never, ever hear the aboriginal voice on a record." She also included the track "Come Around," a song she recorded with for his album "Shock Value." In an interview with "Exclaim," she described opening track "Bamboo Banga" as having a "bamboo-stick beat, house-y feel."

"Kala" is named after M.I.A.'s mother (her previous album, "Arular", was named after her father). She explains "I thought it was fair." M.I.A. stated that "Arular"…was a real masculine album." Regarding "Kala", she says, "This one is about my mum and her struggle—how do you work, feed your children, nurture them and give them the power of information?"

As with her previous album, Arulpragasam created the artwork for "Kala", and was also involved in photography for the album. Photos from Arul's travels during the album's making, taken in Liberia and Jamaica were included in a booklet as part of the album sleeve. The cover artwork for "Kala" featured bright, brash colours, with retro, patterns. These were also seen in her music videos, such as for single "Boyz." It further served as the backdrop for her official website and Myspace accounts, when they were relaunched/redesigned in February 2007. Additional graphics for the album were provided by (a.k.a Cassette Playa) and Steve Loveridge. In an early blog entry on her relaunched official website, M.I.A. spoke of how she was also inspired by DVDs during the album's early making. [cite web | title= "M.I.A. Blog" (Official Site)| url= http://www.miauk.com/mia-blog/ | work = MIAUK.com | date=2007| accessdate=2007-12-30]

"Kala" was initially announced to be released on June 26, 2007, but was eventually released on August 8, 2007 in Japan. Before the release, M.I.A. posted all songs from the album onto her Myspace page. "Kala" debuted at number 22 on the World Albums Chart upon release. The album peaked at number three on the U.S. upon release. It debuted at number 18 on the U.S. "Billboard" 200 chart, selling about 29,000 copies in its first week. [Katie Hasty, [http://www.billboard.com/bbcom/news/article_display.jsp?vnu_content_id=1003632746 "'High School Musical 2' Hangs On Atop Billboard 200"] , Billboard.com, August 29, 2007.] The album generally received a very positive reception from critics, scoring 87 on .

Following the unexpected commercial success of "Paper Planes", Interscope Records is rereleasing "Kala" on November 4, 2008 in the U.S..

"Big Branch" appears as track thirteen on the U.S. and UK iTunes versions as a bonus track, while the Cavemen Remix of "Birdflu" comes as a bonus download with purchase of the edition in the United States. The track listing was confirmed on M.I.A.'s official website in May 2007.

Although not officially considered a single, the song "Birdflu" was made available to download from iTunes on November 23, 2006, and its video was posted on the internet in early February 2007. The first official single to be lifted from the album, "Boyz," premiered on 's Radio 1 show on April 24, 2007. The song was released as a 12", enhanced EP, a radio edit and in USB key format on June 11, 2007. Unofficial remixes of the song including by The Twelves, Kimono Kops and Rock Steady Drew circulated around the internet soon after the song's release. The second single released was "Jimmy", a disco-influenced song. The release included remixes by DJ Eli and a radio mix by Dan Carey. Australian public radio station Triple J began playing "Paper Planes" in late 2007; where it received much radio air play before becoming an official single. The song reached number 17 on the Triple J Hot 100. The EP "Paper Planes - Homeland Security Remixes" featuring the song "Paper Planes" and remixes was released on February 11, 2008, although track listings varied slightly depending on the format.

ong use in popular media

"Come Around" featured in the fourth season finale of "Entourage" and also appears as a UK and Japan bonus track on the album "Shock Value" (2007). "Boyz" was featured in an episode from season two of "Heroes" and in an episode from season 6 of "," as well as in the video game "". "Boyz" was also played during the Best Movie category, and by and during the . The song "Bird Flu" features in the soundtrack of the film "" (2007). [ [http://www.7digital.com/artists/various-artists/vexille-soundtrack-(2)/ Various Artists - Vexille Soundtrack] . 7 Digital. Retrieved December 23, 2007. ] "Boyz" and "Bird Flu" can be heard in the video game "." The song "Paper Planes" is featured in the trailer for the film "Pineapple Express". "Paper Planes" was also featured on Sky TV during a commercial for "CSI Miami".