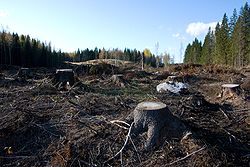 Clearcutting, or clearfelling, is a controversial forestry/logging practice in which most or all trees in an area are uniformly cut down. Clearcutting, along with shelterwood and seed tree harvests, is used by foresters to create certain types of forest ecosystems and to promote select species that require an abundance of sunlight or grow in large, even-age stands.[1] Logging companies and forest-worker unions in some countries support the practice for scientific, safety, and economic reasons. Detractors see clearcutting as synonymous with deforestation, destroying natural habitats[2] and contributing to climate change.[3]

Many variations of clearcutting exist; the most common professional practices are:[4]

Clearcutting contrasts with selective cutting, such as high grading, in which only commercially valuable trees are harvested, leaving all others. This practice can reduce the genetic viability of the forest over time, resulting in poorer or less vigorous offspring in the stand.[citation needed] Clearcutting also differs from a coppicing system, by allowing revegetation by seedlings. Additionally, destructive forms of forest management are commonly referred to as 'clearcutting'. 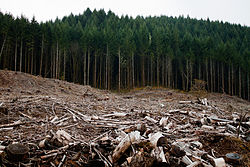 Clearcutting can have major negative impacts, both for humans and local flora and fauna.[6] A study from the University of Oregon found that in certain zones, areas that were clear cut had nearly three times the amount of erosion due to slides. When the roads required by the clearcutting were factored in, the increase in slide activity appeared to be about 5 times greater compared to nearby forested areas.[7] Clearcutting can also lead to an increased possibility of rapid runoff, loss of economic sustainability in that no timber products are available for a long time after clearcutting, loss of habitat for some wildlife species, unattractive visual effect, greater possibility of unwanted shrub and grasses becoming established,[8] as well as a decrease in property values; diminished recreation, hunting, and fishing opportunities.[9]

Clearcutting can be practiced to encourage the growth and proliferation of tree species that require high light intensity.[10] Generally, a harvest area wider than double the height of the adjacent trees will no longer be subject to the moderating influence of the woodland on the microclimate.[1] The width of the harvest area can thus determine which species will come to dominate. Those with high tolerance to extremes in temperature, soil moisture, and resistance to browsing may be established, in particular secondary successional pioneer species.

Clearcutting can be used by foresters as a method of mimicking disturbance and increasing primary successional species, such as poplar (aspen), willow and black cherry in North America. Clearcutting has also proved to be effective in creating animal habitat and browsing areas, which otherwise would not exist without natural stand-replacing disturbances such as wildfires, large scale windthrow, or avalanches.

In temperate and boreal climates, clearcutting can have an effect on the depth of snow, which is usually greater in a clearcut area than in the forest, due to a lack of interception and evapotranspiration. This results in less soil frost, which in combination with higher levels of direct sunlight results in snowmelt occurring earlier in the spring.[11]