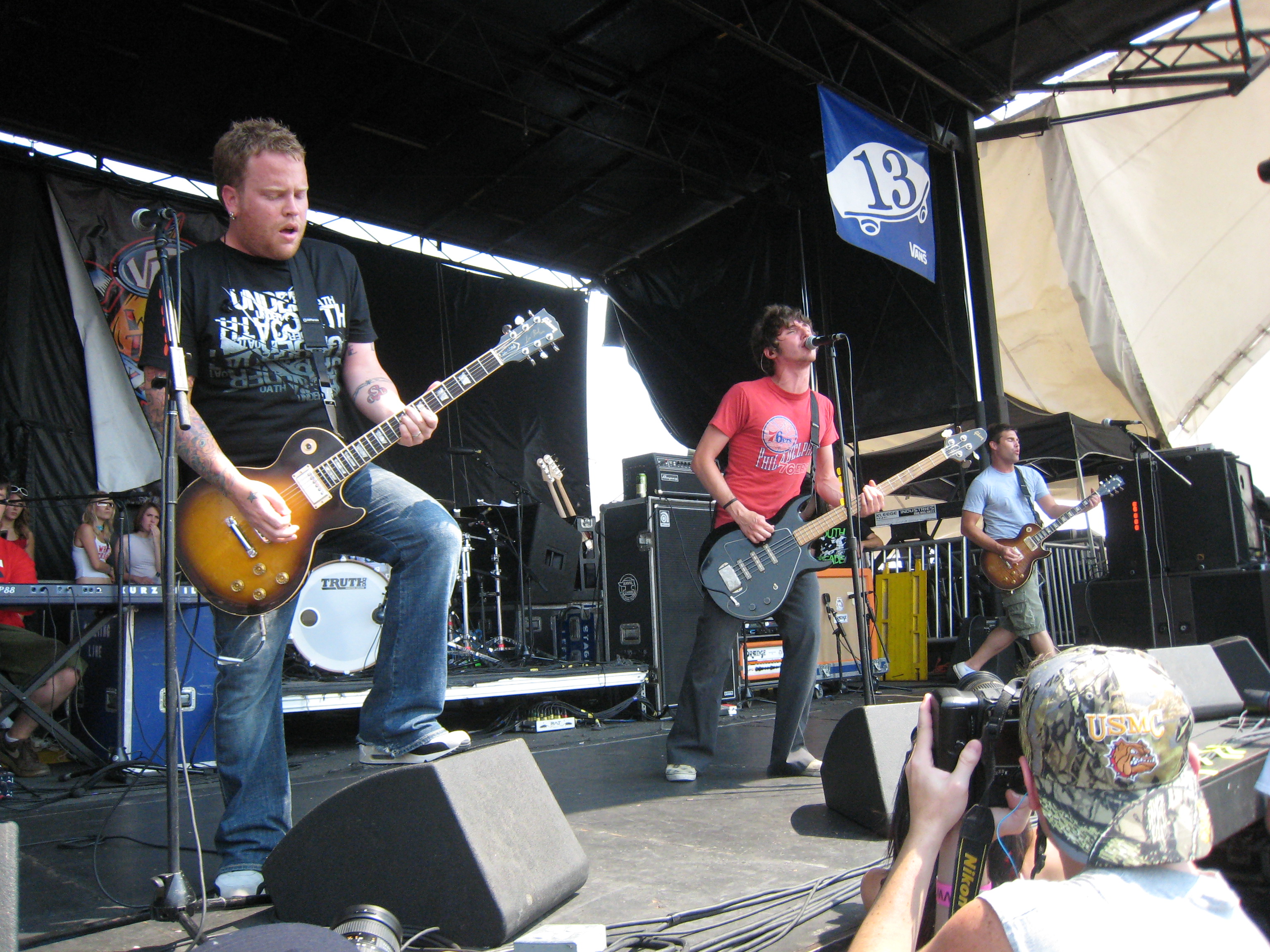 
The Starting Line is an American band based from that formed in .

In 1999, the band that would become The Starting Line was initiated in via an from Matt Watts to vocalist/ . It asked if the then fourteen-year-old Vasoli, who was at that time in a band called Smash Adams, was interested in "Jamming and shit", as the message title read. Only a few weeks later, Vasoli found himself rehearsing with his future bandmates Watts, guitarist Mike Golla and Tom Gryskewicz. Initially, the band had another guitarist named Ryan Altmiller, who played with them for only two weeks and later went on to play in bands such as Racing Daylight and Shadows in Lakeland.ref|ryan Soon, the band started touring under the name Sunday Drive, selling out home-made merchandise and a self-recorded demo cassette titled "Four Songs". Their first official release was a three-way split with The Jimmy Tuesday Band and The Commercials contributing three songs each, released on KickStart Audio in 2000.

Sunday Drive was soon approached by We the People Records and asked to produce a recording session (the infamous "We the People Records Sessions"). Set for a release in December 2000, the twelve songs were initially planned to become the band's debut full-length "With Hopes of Starting Over" on We the People Records, but they ended up serving only as demos for tracks on future releases, as the band signed with in April 2001.ref|wethepeople On Drive-Thru, they soon released their debut EP "". They later found out, the name Sunday Drive was already taken by a band, so they changed their band name to The Starting Line. The band has said there is no significance behind the name, it was the only name they all could agree upon.ref|archiveinterview

On , , almost exactly one year after the release of their EP, the full-length "" followed. The songs ranged from energetic and fast-paced to melancholy and calm, dealing with performing on stage ("Given the Chance"), feeling homesick ("Left Coast Envy") and getting even with Vasoli's ex-girlfriend Karina ("Up & Go", "Hello Houston", among others). The hit single "Best of Me" and its two s, as well as the second single "Leaving", received heavy radio and TV airplay, securing The Starting Line a spot on the .

Due to their desire to put out new material, the band decided to release an all- EP, recorded in three sessions over the following year. The first three songs (recorded in The Prize Fight's Bob Jones' bedroom in August 2002), the second session (recorded in Vasoli's basement in March 2003) and the last track (recorded on the band's touring bus in April 2003) became "", released on , . The CD and the DVD version issued simultaneously, featuring an acoustic set performed live at Skate & Surf 2003 in , would be their last releases put out solely on Drive-Thru Records, as The Starting Line was signed by soon afterwards.

Their major label debut, "Based on a True Story", came out in May 2005. Lyrically, the band dissociated themselves from the post-relationship formula that was predominant on their previous records. The otherwise very positive and cheerful album was overshadowed by several rather angry songs, written to spite the band's record label. Songs like "Inspired by the $" featured lyrics that are unmistakably directed at Geffen: "Get to the point/Get it across/To the boys at the top of the ladder I'm climbing up/I have my doubts". Another section of the song refers to a meeting the band had with the label's executives, where The Starting Line was asked to write more radio-friendly songs in the vein of 's "Catalyst" (2004) and recreate "Best of Me" ("Just stay the same way/Do it like you did it before/Remain the same shape", followed by "If I did it again, then Lord stop me, then/God help me now, Lord help me out").ref|geffen2 The album was far more successful than the band's 2002 effort and sold 42,000 copies within its first week, as opposed to its predecessor's 11,000.ref|sales The release was followed by the semi-headlining with , kicking off in September 2005. The band brought with them a new addition to their live performances, keyboardist Brian Schmutz. A friend of Vasoli's, the two had short lived side-project called Statue in 2004. A few dates into the tour, The Starting Line were &mdash; at their request &mdash; released from their record deal with Geffen, and became s.ref|geffen Vasoli describes their time with Geffen: " It was kind of like having a sort of hot girlfriend that never talks to you. You say, "Oh yeah, I 'm dating this supermodel, but she's been in France for three years and doesn't really call me... but she promises that when she gets back we're REALLY gonna start to get serious. It was always an imaginary relationship."ref|Vasoliinterview

In early January 2006, the band signed with . The band released their third full-length album "Direction" on , , containing the single "Island" which was written about and for Vasoli's girlfriend of the last four years, Michelle. The Album peaked at #30 on the Billboard 200 chart, but fell off the chart four weeks later. To date, the band's highest ranking on the chart was #18 with their second album "Based on a True Story". The band just completed the 2007 Warped Tour and began their nationwide headlining tour the following September.

On , the band announced in an e-mail and on they would be going on a break in order for Ken and Brian to explore , Matt and Tom to explore The Seventy Six, and Mike to spend time with his two daughters. The band has been playing with the idea of coming back in 2011, but no one knows if there is any truth behind the claims. Matt Watts is currently a band manager for Red Light Management, managing the bands Like Lions, New Atlantic, and Hit The Lights. They will continue The Starting Line if and when the time is right. [ [http://www.absolutepunk.net/showthread.php?t=301596 The Starting Line Press Conference - News Article - AbsolutePunk.net ] ]