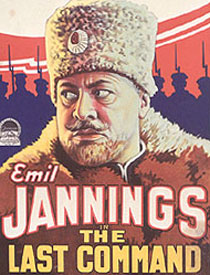 The plot concerns a Tsarist Russian officer, Grand Duke Sergeus Alexander (), who has just committed revolutionary Leo Andreyev () to prison, while retaining his beautiful partner Natacha as a mistress. She plans to kill him, but comes to realize that he is at heart a man of honor who loves Russia as deeply as she does. While helping him escape the Bolsheviks she is killed, the shock of which gives him a nervous tremor. Many years later we see Sergeus Alexander reduced to near poverty and making a slim living as a Hollywood extra. A director, none other than his old adversary Leo Andreyev, recognizes him and, in an ironic act calculated to humiliate him, casts him as a Russian general in a battle scene. Bullied by the costume department (his uniform and boots are thrown right in his face) he is directed to give a speech to a group of actors playing his soldiers. Slowly losing his grip on reality he imagines himself genuinely on the battlefield and passionately urges them to fight for Russia. Overstraining himself he dies, his last words inquiring if they'd won the battle. Andreyev remarks "He was a great man."

Jannings won the first Academy Award for Best Actor in a Leading Role for his performances in this film and "The Way of All Flesh," the only year that actors were awarded for multiple performances.

* can be spotted as a screaming revolutionary who at one point sneers in Jannings' face.

The ARG of the same name [http://last-command.com Last Command] used cast and crew names from both this and the 1955 film to populate its initial "subroutine list." [ [http://forums.unfiction.com/forums/viewtopic.php?t=26369] ]

When Sergeus Alexander finds one of his aides trying on his overcoat he instructs his guards, "If this happens again remove the coat and shoot the contents."