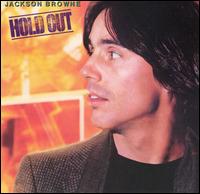 
"Hold Out" is the sixth by American , released in 1980 (see ). Although critically the album has not been as well received as other Browne recordings, it remains his only album to date to reach #1 in the Billboard charts.

"Hold Out" contains the fewest tracks of any Browne studio album (seven), and for a while had the longest song in his catalog, "Hold on Hold Out", However, "Where Were You" from his latest album , is longer.

All tracks composed by Jackson Browne; except where indicated