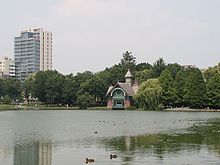 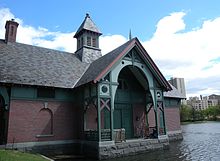 Harlem Meer ("Meer" is Dutch for "Lake") occupies the northeast corner of New York City's Central Park, in a section of park that was added to the original site, which had originally ended at 106th Street. It lies north of the Conservatory Garden, with a meandering and diverse shoreline that wraps around the bluff that contains the Blockhouse, the remains of gun emplacements erected for the War of 1812, which never saw action. Today Harlem Meer has been reduced to 11 acres (45,000 m2) and 1.2 kilometers (3/4 mile) circumference by the construction of Lasker Rink and Pool in 1966, for summer swimming and winter ice-skating, over its westernmost end.

The Meer, as Frederick Law Olmsted and Calvert Vaux called it, was excavated in the lowest-lying section of the park, a semi-brackish, partly tidal wetland, which drained slowly into the East River; as Harlem Commons[1] It separated the former suburb of Harlem to the north from the lower part of Manhattan Island. To avoid the swamp, the Boston Post Road had detoured westwards into the future park site, rising to cross McGown's Pass.[2] The Meer and its wooded landscape were carried out by Andrew Haswell Green, to Olmstead and Vaux's specifications, from 1861, while Olmsted had been relegated to an advisory capacity.

Harlem Meer once again has natural-seeming banks, restored in 1988-93 after a 1940s concrete curbing was removed, and the Meer was cleaned of 34,000 cubic yards (26,000 m3) of sediment and debris[3] and redredged. On its north shore, the Charles A. Dana Discovery Center was constructed, to provide visitor orientation for the north end of Central Park, in a style intended to harmonize with Calvert Vaux's original Victorian park structures. The waterside plaza next to it is the site for the late-afternoon Harlem Meer Performance Festival, from mid-June to the first week of September. Catch-and-release fishing is a favorite summertime occupation along the Meer's banks.

An island in the Meer provides a retreat for waterfowl, particularly Black-crowned Night Heron. The meer also has a resident population of muskrats.

The angler, artist, and author Ron P. Swegman has made Harlem Meer the focal point of the essay collection Small Fry: The Lure of the Little[4]. The book includes a section titled "Bright Fish, Big Cities", a pun on the New York novel "Bright Lights, Big City" by Jay McInerney; it details the Meer's history and describes the experience of fly fishing there in the twenty-first century.