Demobilization is the process of standing down a nation's armed forces from combat-ready status. This may be as a result of victory in war, or because a crisis has been peacefully resolved and military force will not be necessary. The opposite of demobilization is mobilization.

In the final days of World War II, for example, the United States Armed Forces developed a demobilization plan which would discharge soldiers on the basis of a point system that favoured length and certain types of service. The British armed forces were demobilized according to an 'age-and-service' scheme.[1]

The phrase demob happy refers to demobilization and is broadly applied to the feeling of relief at imminent release from a time-serving burden, such as a career.[2] In Russian language it is known as dembel and has become a certain tradition in the Soviet and post-Soviet Armed Forces. An American equivalent is "short-timer's disease" (a play on "Alzheimer's disease"), comparable to "senioritis" among United States high-school students. 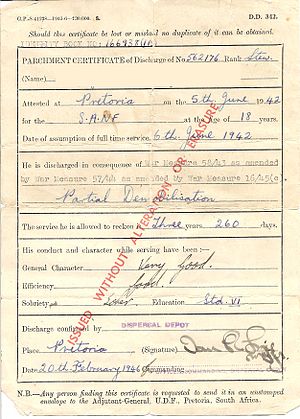 Demob papers issued to a South African sailor in February 1946 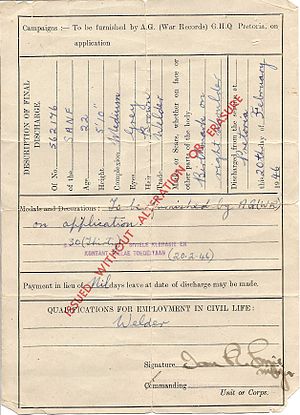